While technology stocks typically make up the top holdings of environmental, social, and governance (ESG) focused funds, does technology really enable a sustainable future? Electricity and the internal combustion engine are two of the most transformative technologies in the last few centuries, but they also are two of the greatest sources of greenhouse gas emissions. In 2017, for example, transportation and electricity accounted for roughly 57% of greenhouse gas emissions in the US. That said, of course technology is an important part of the solution. Indeed, since its invention in 1800, the battery has been on a slow but steady trajectory of improvement and we believe it now stands at a tipping point, ready to offset much of the emissions from transportation and electricity.

If consumers were motivated primarily by environmental issues, they already would have adopted electric vehicles (EVs) in a big way. EVs have been around for more than 100 years and emit the equivalent of 4,350 pounds of carbon dioxide (CO2) per vehicle each year, less than half of the 11,400 pounds from the average gas-powered car. Because of their cost, consumers have not gravitated much toward battery powered vehicles, until now. Battery costs have declined to such an extent that the price of an average EV should drop below that of an average gas-powered car within the next two to three years.[1] 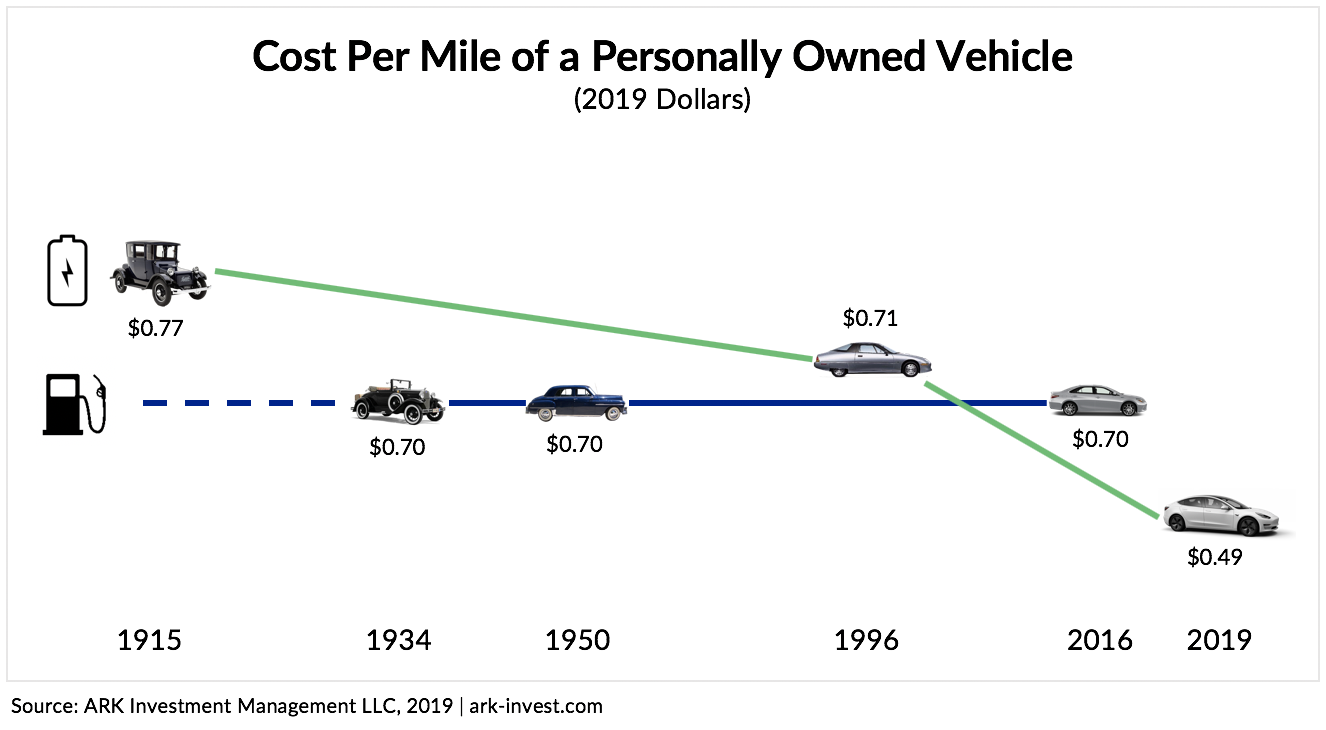 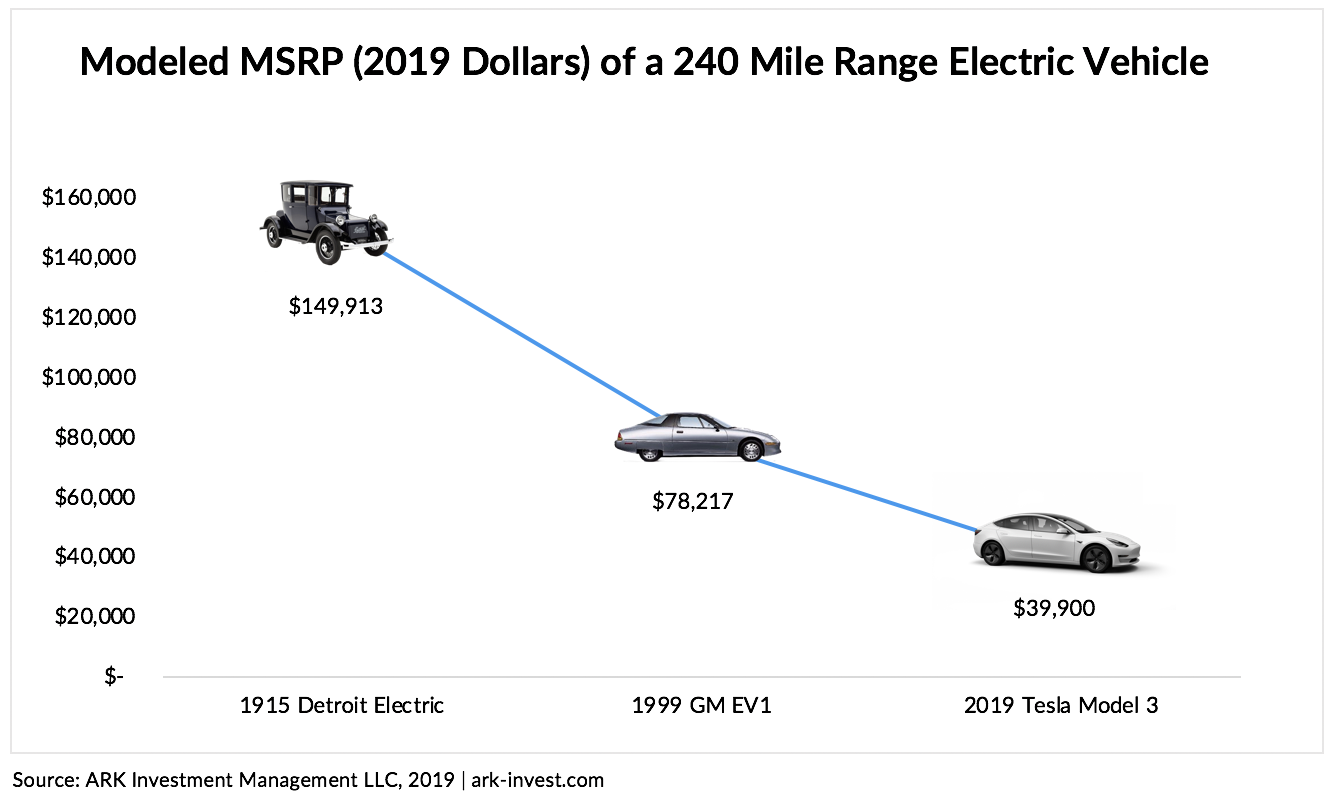 Even at high adoption rates, EVs probably will not dominate the installed base of autos globally for 15 years. That said, autonomous vehicles are likely to be powered primarily by electric drivetrains and should increase their share of miles traveled because they will be less expensive and more convenient than personal cars. We believe that when they debut in the next two to three years, shared autonomous vehicles (SAVs) probably will proliferate quickly, as did ridehailing just for its convenience, and will account for more than 50% of total miles traveled in fewer than 10 years. Even if the number of EVs on the road were to remain constant at today’s levels, the shift to SAVs would increase their share of vehicle miles traveled, accelerating the decline in emissions from the transportation sector and marking the peak in oil demand. 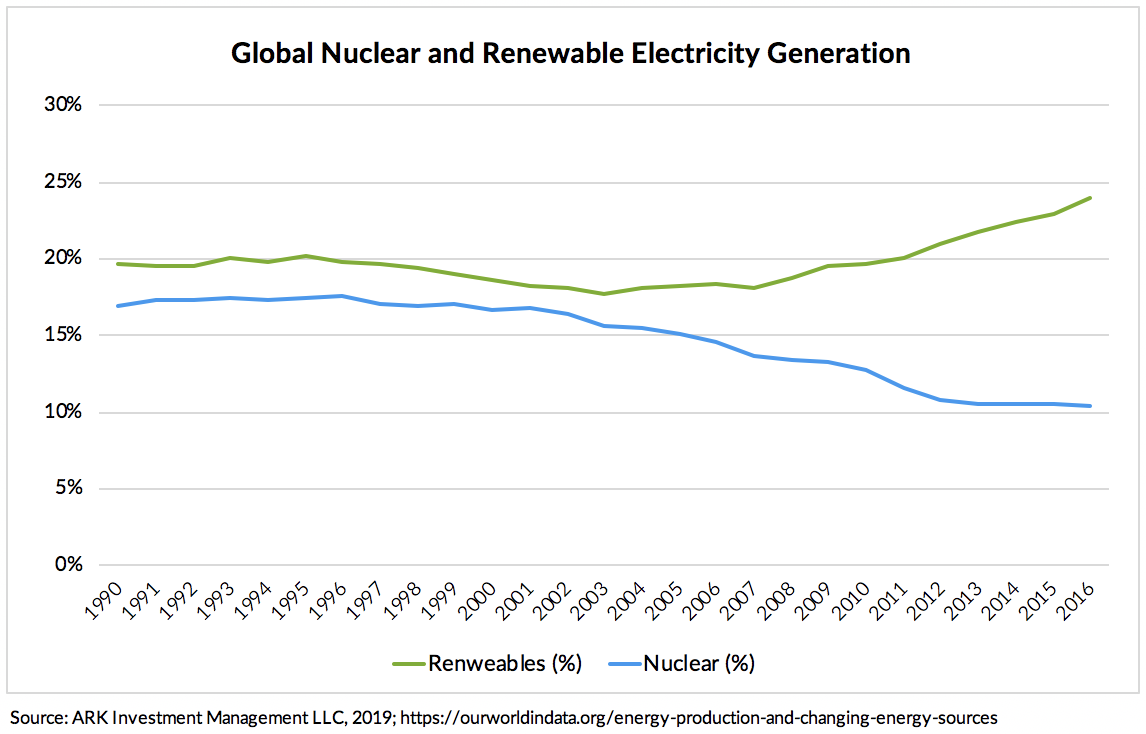 The chart below compares the cost of electricity generated from natural gas peaker plants to the cost of that from battery-based energy storage, highlighting two scenarios. The brown circle depicts the scenario we face today: the average natural gas peaker plant is utilized ~10% of the time in the U.S. resulting in a levelized electricity cost of ~$0.14/kWh.[2] The red lines show ARK’s forecast: utility energy storage costs should drop from $400/kWh to $150/kWh in the next five years, pushing the cost of electricity down by roughly 30% to ~$0.09/kWh and undercutting natural gas plants that operate 25% of the time or less.[3] 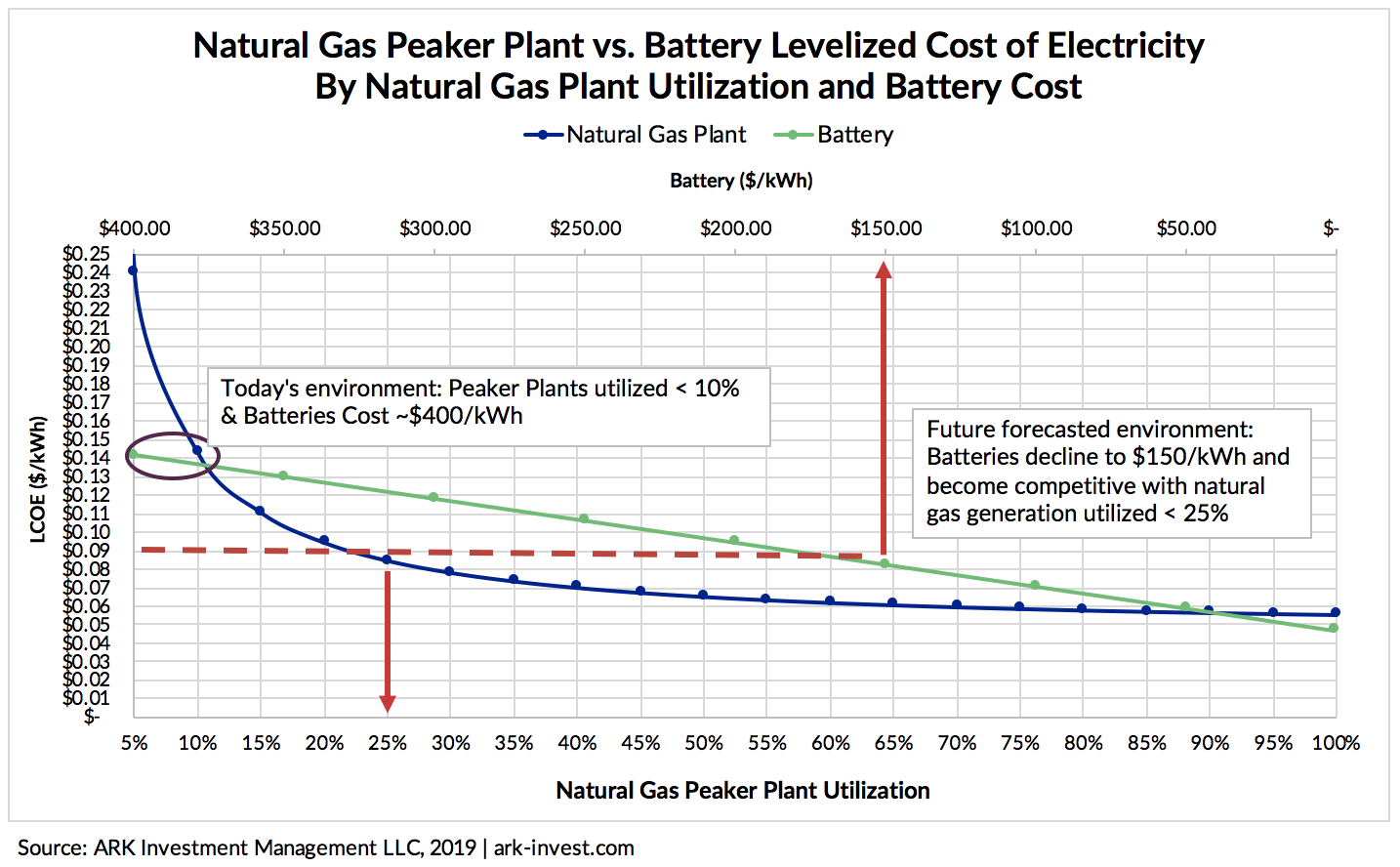 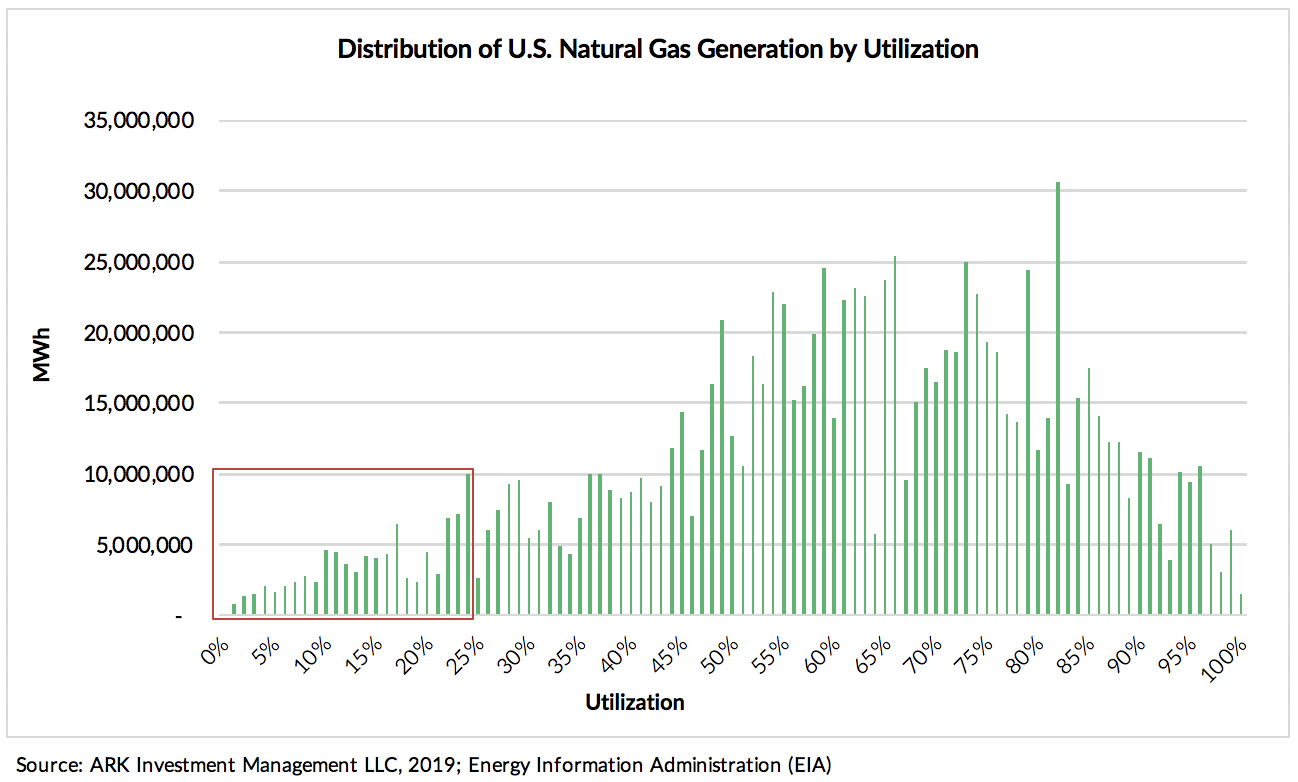 We believe that as the vehicle fleet grows increasingly electric, the transportation and electricity sectors will begin to converge, both cutting emissions. The pace of this change seems to be accelerating. During the first half of 2019, for example, over 60% of trade-ins for the Tesla Model 3 were non-luxury vehicles,[4] suggesting that owners may be internalizing the lower total cost of ownership and expanding the size of the premium market. At the same time, PG&E is planning the world’s largest battery deployment instead of investing in natural gas plants, and GE is shutting down an uneconomic natural gas plant 20 years early. While the battery will not remove existing greenhouse gas emissions from the atmosphere, it could play an outsized role in curbing their growth as it transforms transportation and, along with renewables, reorganizes the grid and the generation of electricity.