In April, Tesla [TSLA] announced its Powerwall, an energy-system for homes and offices. Barring a change in business model, however, residential energy storage is unlikely to contribute meaningfully to Tesla’s revenue.

Theoretically, if deployed at scale, Tesla’s Powerwall could save the US economy $26 billion annually. Charging at night and distributing power during the day, the Powerwall could provide electricity when demand is high, typically in the middle of the day, and then charge when demand is low, typically at night. Currently, the average peak price for residential electricity is $0.24 per kWh, double the average price of $0.12 per kWh, as shown below. 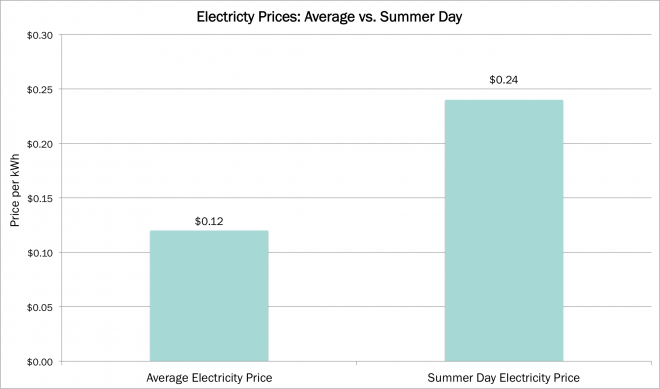 At today’s prices, however, the mass-market is unlikely to plug in to the Powerwall. Currently, Tesla charges $3,000 for a 7 kWh battery system.[1] ARK estimates that Tesla’s cost to produce a Powerwall is roughly $2,400, assuming a 20% gross margin (lower than Tesla’s 25% margin on cars). If Tesla were to reduce its costs to produce a Powerwall to equal its costs to produce its electric vehicle batteries on a per kWh basis and average a 25% gross margin, the 7 kWh system could be priced at $2,000.

Consumers are unlikely to invest in the Powerwall until prices drop to $1,200, even in today’s low interest rate environment. At a price of $1,200, the consumer’s cash flow from the system would cover the debt service on a 4.5% loan, based on average consumer electricity prices.

At the Tesla shareholder meeting on June 9th Elon Musk announced that Tesla would double the power output of the Powerwall without changing price. In other words, the battery will be able to discharge faster. This update will not affect capacity or the economics of the system.

ARK estimates that when Tesla’s Gigafactory battery production facility opens in 2020, its scale will drive battery prices down by 40% to roughly $1,700 per unit, still 40% above the consumer’s breakeven price. By 2025, given the same assumptions, the Powerwall would be down to $1,400 per system, or $200 per kWh, again above an acceptable consumer price target (as shown below). 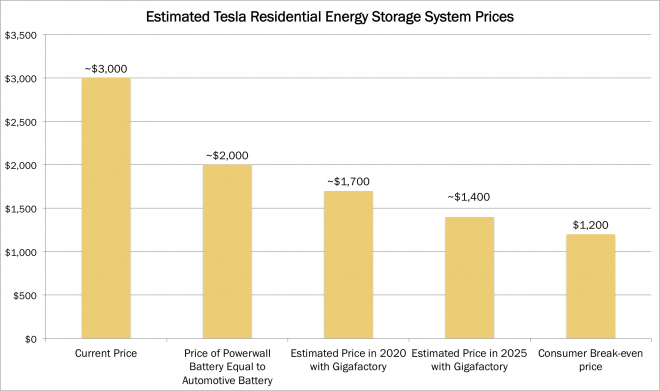 The Powerwall faces other challenges to its adoption as a residential energy storage solution. Most consumers obtain all of their energy supply directly from utilities and are not under a differential pricing scheme (paying different rates based on grid demand). These consumers would not realize savings from the Powerwall because the Powerwall would charge using energy supplied by the grid at a level cost. Instead of buying the Powerwall, these consumers could choose to invest in efficient appliances, such as water heaters and air conditioners. That said, despite compelling potential savings of energy efficient appliances, uptake to date has been slow.

Solar panel owners could be natural customers for the Powerwall, were the infrastructure demands are not cost prohibitive. In many areas, solar panel owners – only 0.3% of US homes – can sell electricity back to the grid. These users would benefit from an residential energy storage system, such as the Powerwall, that would allow them to store and sell extra energy to the grid. The cost of a system consisting solely of solar panels and the Powerwall, however, would cost roughly $98,000, according to analysis by Bloomberg.

For the Powerwall to be viable, Tesla must make significant advances in the product itself and its business model. One option would be to recycle end-of-life Tesla vehicle batteries, thereby reducing the cost of the Powerwall for consumers. It also could bundle the Powerwall system with the purchase of a Tesla electric vehicle (EV), offering an at-home rapid-charging capability. Alternatively, by taking control of all the Powerwall units to form a network, aggregating stored energy and brokering it to local utilities on-demand at peak pricing, Tesla could overcome inefficient energy use and pricing by paying the consumer higher prices for offloaded energy. Were Tesla to pursue this business model, it would compete with demand-response firms such as EnerNOC [ENOC], with which Tesla currently partners. The market shouldn’t be shocked to see any one of these strategies.