Tesla Could Sell a Million Vehicles Per Year by 2020

Tesla TSLA [TSLA] has stated that, when it is fully operational in 2020, the Gigafactory will produce enough batteries for 500,000 vehicles.[1] While skeptics doubt that the demand will be that high, we believe that it will outstrip Tesla’s ability to deliver vehicles into the marketplace, and then some. Given its current pipeline, Tesla could see demand for more than 1.4 million vehicles annually, with Model 3 demand alone exceeding 1 million units by 2020. Perhaps the question should not be whether or not the company will surface a half million buyers in 2020, but how it will be able to scale to accommodate three times that many.

Tesla’s first vehicle, the Model S, has been successful, especially given its high price-point and the precipitous drop in gasoline prices. In the U.S. last year, it outsold comparatively-priced luxury vehicles from established producers such as BMW [BMW] and Mercedes [DDAIF]. Comparative automakers’ unit sales can provide a basis for estimating Tesla’s potential underlying demand, as shown below. Tesla’s Model S is priced competitively with BMW’s 7 Series. The Model X is roughly comparable to BMW’s X5, and the Model 3 is likely to be priced in line with the BMW 3 Series. 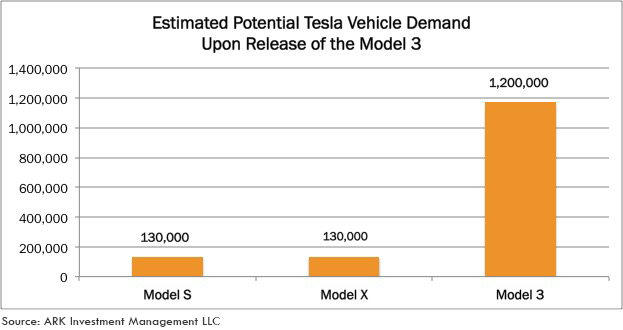