ARK previously detailed the tactical advantages Tesla would enjoy if it were to launch a vertically integrated ride-hail service. Here, we detail the strategic logic of Tesla launching that service.

ARK believes that vertical integration through a ride-hail network would:

While the launch of a commercial robotaxi business should transform Tesla’s profitability radically, its technical feasibility is somewhat uncertain. ARK previously detailed how a robotaxi service could increase Tesla’s valuation by 10x, though in our published base case valuation we assigned only a 30% probability to its success.

Pursuing a vertically integrated ride-hail service, Tesla could unlock the benefits of a robotaxi-like financial model and at the same time lower considerably the technical risk of launching a robotaxi network. For the first 3 million cars sold into the ride-hail channel, ARK believes that Tesla would generate net profits per mile close to that of an autonomous robotaxi service. As shown below, a vertically integrated ride-hail service priced in line with existing services like Uber and Lyft should generate 28 cents of profit per mile. While ARK expects the price-per-mile of a robotaxi network to decline over time, without the expense of human drivers and with the increased convenience and value profile for consumers,  its profitability still should be similar to that of ride-hail services, as shown below. 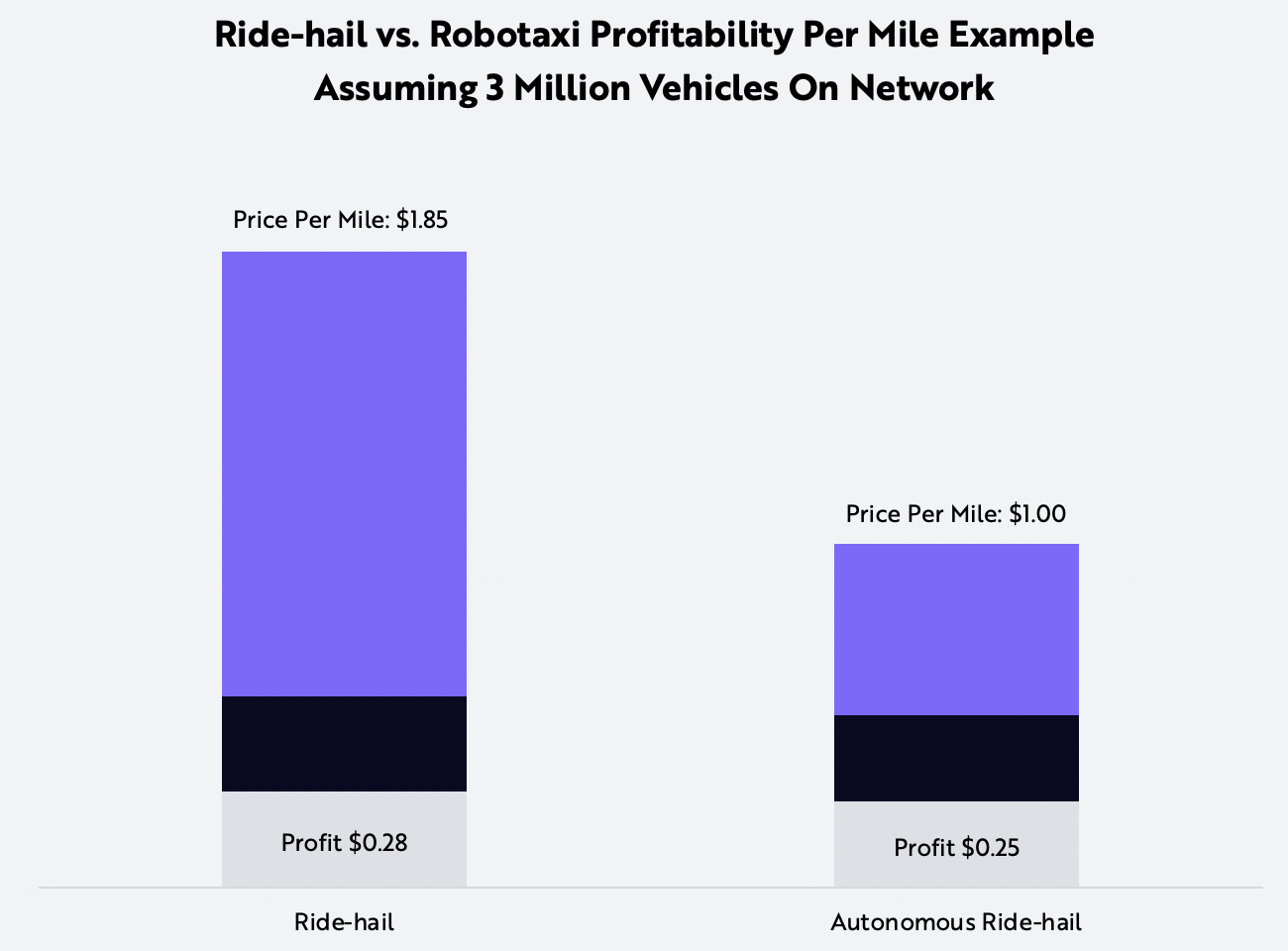 According to ARK’s research, while the addressable market of a robotaxi network is 100x larger than that of a ride-hail service, Tesla would generate recurring profitability earlier and more predictably were it to launch both services. ARK’s modeling suggests that in 2025 ride-hail could increase Tesla’s recurring operating earnings by over $30 billion, bolstering its valuation relative to that for its standalone EV business. If Tesla were to decide against the commercial launch of robotaxis, then a ridehail service alone could improve its profitability and ultimately account for roughly 30% of the company’s enterprise value by ARK’s estimates.

Lay the Operational Foundation for the Robotaxi Network

The operational requirements for vertically integrated ride-hail services are similar to those for commercial robotaxi systems, as shown below. To commercialize its robotaxi network, Tesla will have to integrate payments, develop routing and matching algorithms for riders and drivers, recruit and train vehicle-owners to join the platform, concentrate fleet assets in target markets, and attract prospective riders. Each of those capabilities would be necessary to support a ride-hail service as well, so why would Tesla wait until Full-Self-Driving software to develop them? 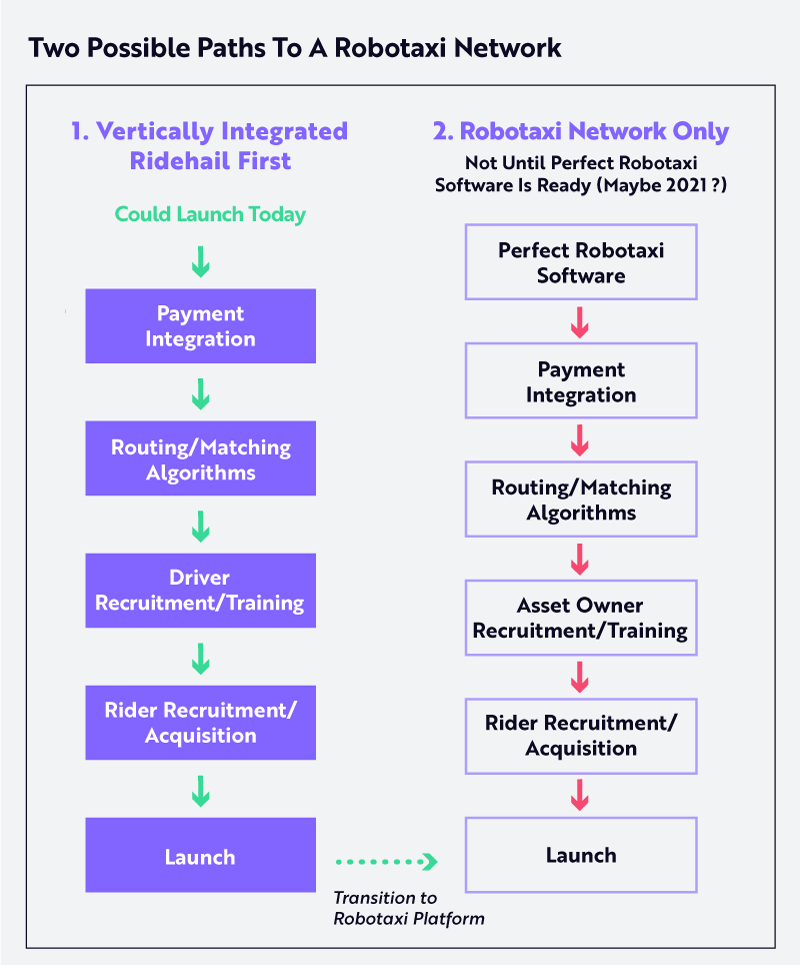 Not all the preparation for a vertically integrated ridehail service would add value to Tesla’s robotaxi initiative. Notably, Tesla would have to develop sales and recruitment strategies for a ride-hail service on a city-by-city basis. Though it could attract drivers to its platform, the startup costs probably would exceed those of launching a robotaxi service.

That said, while drivers would be committing to a platform aiming ultimately to disintermediate their driving services, they also would be investing in an asset—a vehicle—that would appreciate, in our view meaningfully, when converted to a robotaxi. Drivers would become vehicle operators, with incentives to keep their vehicles clean, charged, and utilized.

Increase the Odds of Robotaxi Success

While Tesla could launch a ride-hail service on time, the robotaxi landscape is littered with missed timelines and false starts. Many auto manufacturers once expected to launch truly driverless capabilities by 2020 but not one delivered on time. Even Waymo, the Alphabet subsidiary supposedly two months from commercial launch in November 2018, delayed its launch by roughly two years. Tesla also has slipped on its timelines, suggesting that the technical challenge associated with autonomous driving is daunting.

That said, we believe Tesla does have a significant competitive advantage: it can source real-world driving data and deploy real-world tests of its autonomous system at scale. Tesla’s fleet – all of the Model S’s, 3’s, X’s, and Y’s equipped with Autopilot on roads today – drives more miles in a day than Waymo’s fleet does in a year.[1] Tesla can collect more real-world examples of idiosyncratic faults or corner cases more quickly than can Waymo and then can battle test solutions against real-world conditions across roughly one million vehicles.

While ARK believes Tesla already has access to more driving data than any company in the world, ride-hail miles could be even more valuable to Tesla as they would mimic the future trips taken in robotaxis. A ride-hail network would give Tesla significantly more data to train Autopilot. Based on traditional car-driving habits, ARK estimates that Tesla will have access to more than 40 million miles of driving data per day by the end of 2020. According to our estimates, ride-hail could boost its annual real-world driving data generation by roughly 70% by 2025, as shown below. 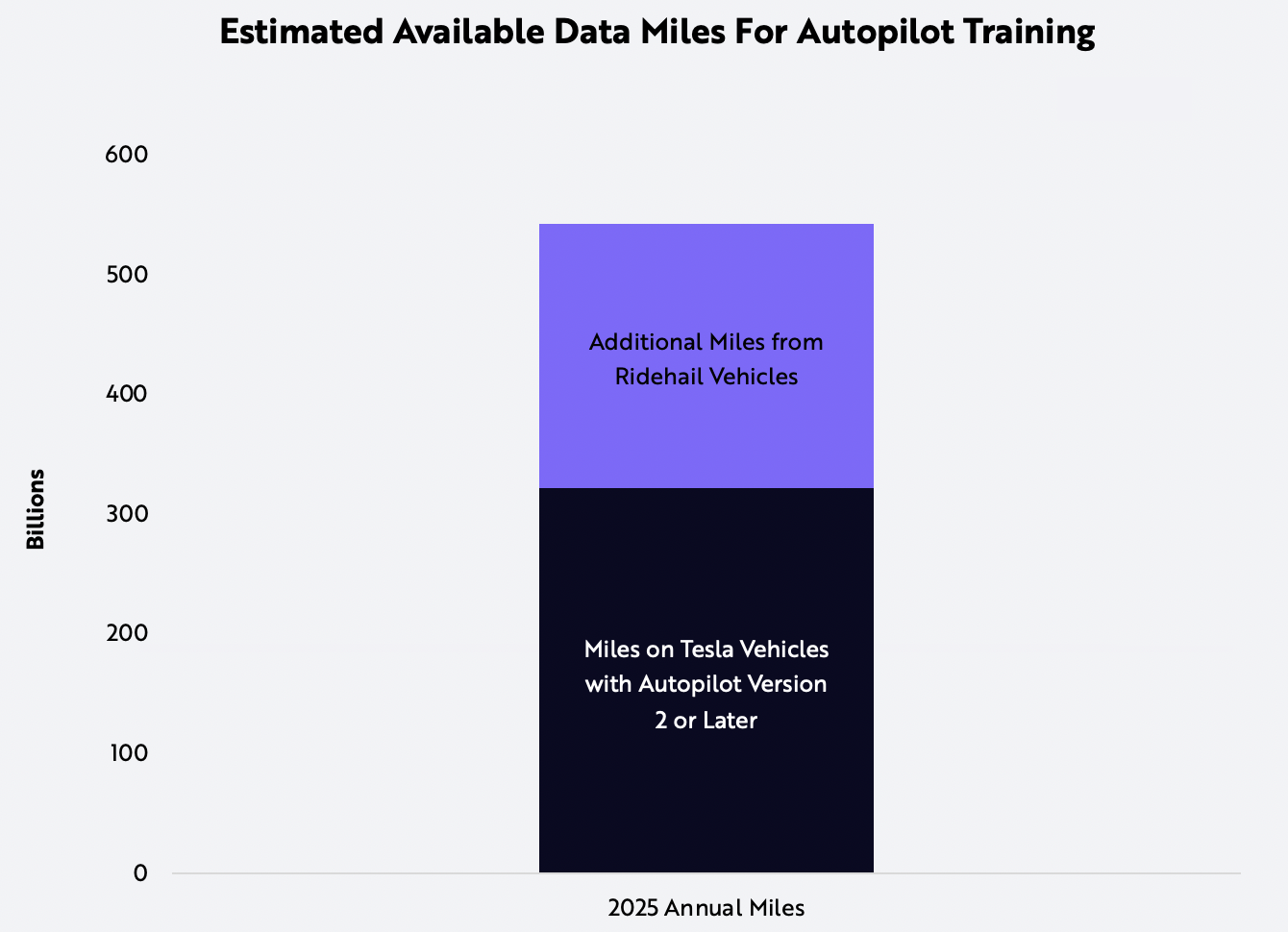 As a result, Tesla will have access to more corner cases as it trains its autonomous neural nets, potentially solving for full autonomy sooner than would otherwise be the case. More real-world driving data also will be critical in convincing regulators that Tesla’s autonomous system is safe. To demonstrate that the performance of its autonomous vehicles is statistically superior to that of human drivers, ARK believes Tesla will have to provide regulators with billions of miles of data. Ride-hailing miles could shave months and perhaps years from the time and data collection necessary for regulatory approval.

In the next year, given the number of Uber and Lyft drivers in need of work after the coronavirus crisis juxtaposed against the increased consumer demand for transport options other than mass transit, a Tesla ride-hail network could be well-timed.  Today, approximately 13 million US gig workers are collecting unemployment benefits in the wake of the coronavirus, and subway usage is down nearly 70% in New York City.  Ride-hailing also could provide free marketing focused on potential Tesla buyers, particularly in urban areas. Consequently, a ride-hail network could benefit not only Tesla’s bottom line but also serve public needs both during and after the pandemic.