Last year we published a piece titled Tesla Through the Lens of Apple that argued Tesla’s strategy of vertical integration would allow it to out-execute and out-innovate its competitors, much as Apple had done in the past decade. This month, Tesla’s announcement of its own Full Self-Driving (FSD) computer is the strongest endorsement of this thesis yet. Tesla’s FSD is the first such computer to launch in production vehicles and, according to our research, is four years ahead of the competition. 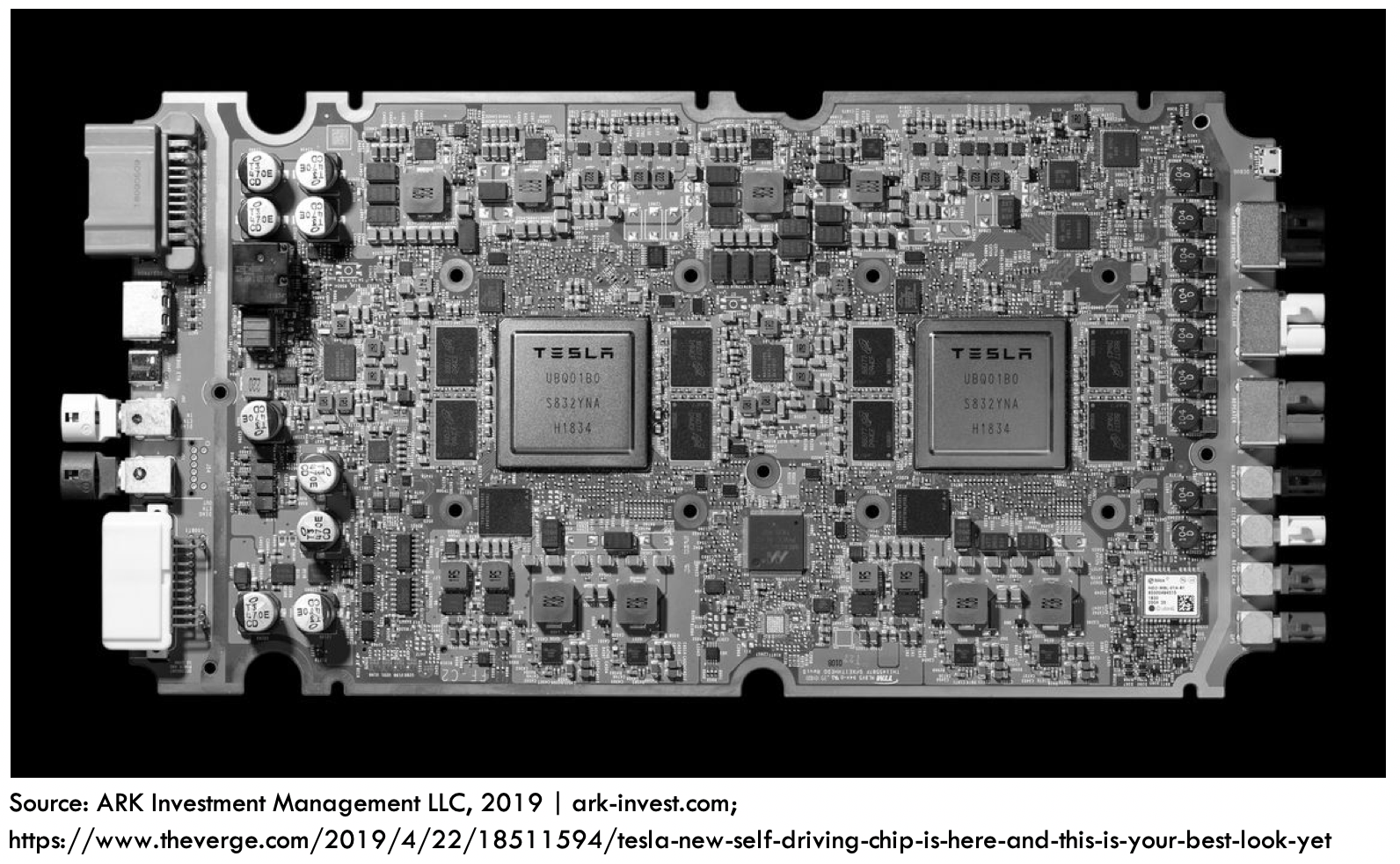 The Tesla FSD is an automotive grade computer powered by two custom SoCs (system-on-chip), as shown above. The SoCs leverage commodity ARM CPUs and GPUs but are augmented by a Tesla-designed neural net accelerator capable of performing 147 trillion operations per second—sufficient for full-autonomous driving, according to Tesla.

Industry pundits were skeptical about Tesla’s decision to design its own chips. Why not buy processors from Nvidia, whose products Elon had frequently praised? The answer—Tesla had to build its own chips to ship a level 5 capable computer in 2019. Pegasus is Nvidia’s Level 5 self-driving computer using two Xavier SoCs and two Turing-class GPUs. With four chips, Pegasus is much larger, more expensive, and more power hungry than the Tesla FSD. Pegasus consumes 500 watts of power, seven times that of Tesla’s FSD, and would be too big for a Model 3.

Instead of waiting for Nvidia’s next gen processors, Tesla hired chip designers and built its own. Tesla’s processor isn’t better than Nvidia’s—it’s just better for its own workload. While Nvidia’s chips must support a large number of neural network architectures and sensor modalities like LiDAR, Tesla’s SoC needs to support just the sensor suite and neural net on its own vehicles. Having just one software target reduces complexity dramatically, improving performance efficiency. The Tesla FSD may have only half the raw performance of Nvidia’s Pegasus box, but it is more likely to reach optimal peak utilization as it runs only on Tesla’s neural network. 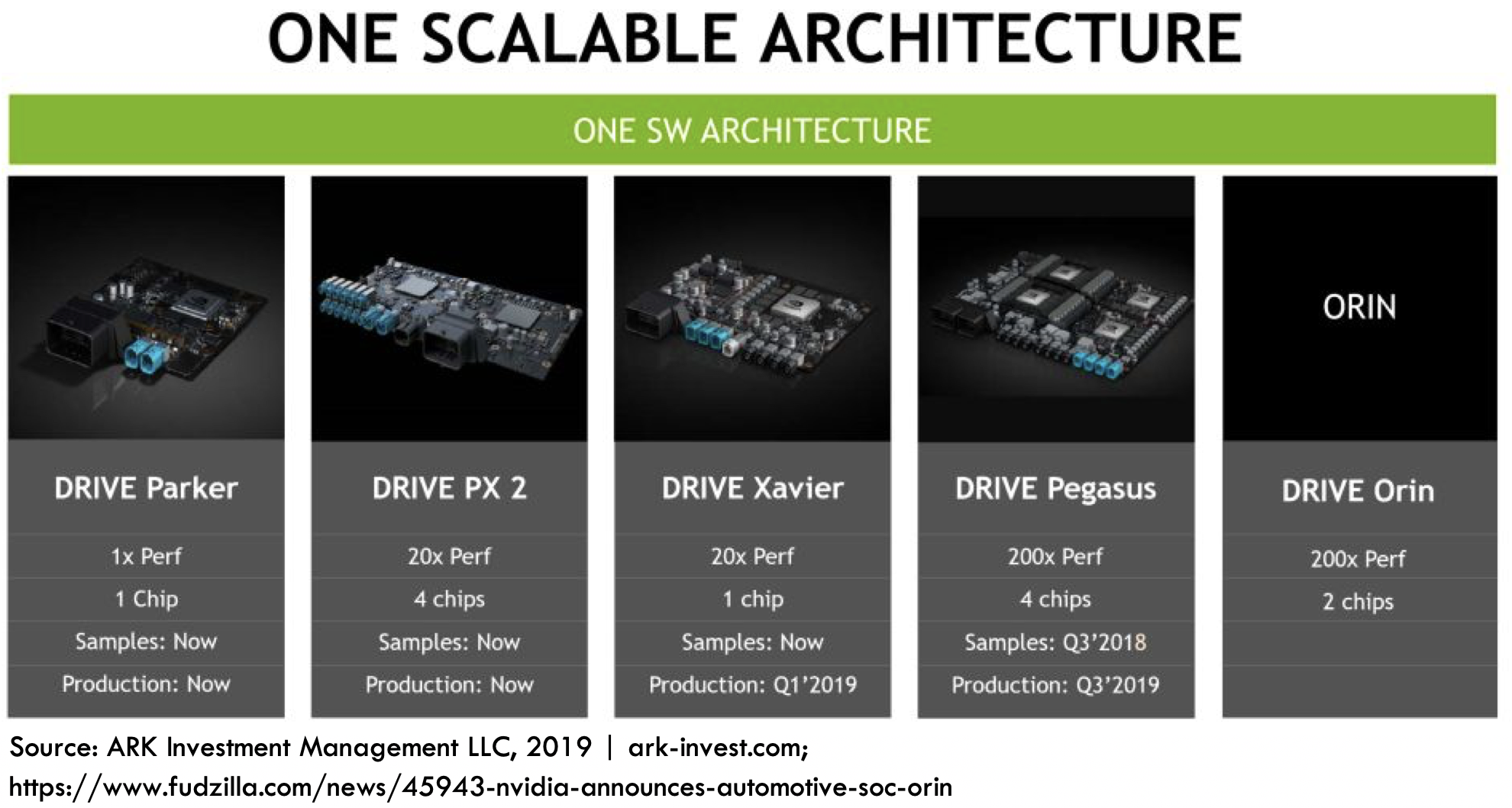 Nvidia’s next generation self-driving computer, dubbed “Orin”, shrinks Pegasus from four to two chips while achieving the same level of performance, as shown above. Orin probably will be announced at the company’s GPU technology conference next year. Based on the cadence of its chip development in the past, production versions should be released in early 2021. Then, if true to form, automakers will take another two years to qualify, test, and deploy the computer in commercial vehicles. All in, Orin-powered vehicles should debut sometime around 2023.

By bringing chip-design in-house, Tesla has leapfrogged the automotive industry by four years— Tesla’s FSD is effectively an Orin-class product shipping today rather than in 2023. When Orin appears in commercial vehicles, Tesla should be on its next generation self-driving computer.