The ARK ecosystem was founded on the belief that transparent, collaborative, and interdisciplinary information flow will provide unique investment insights. A dedicated team of  Analysts and Portfolio Managers works closely with external Theme Developers [1], who validate and support our theme-based research, to help us make better informed investment decisions. This Tesla case study shows the flow of a typical ARK discussion.

In a thought provoking piece titled “Is Tesla Disruptive?” Horace D. argues Tesla [TSLA] is not disruptive in the classic sense. So what does ARK think, is Tesla a real disruptor? 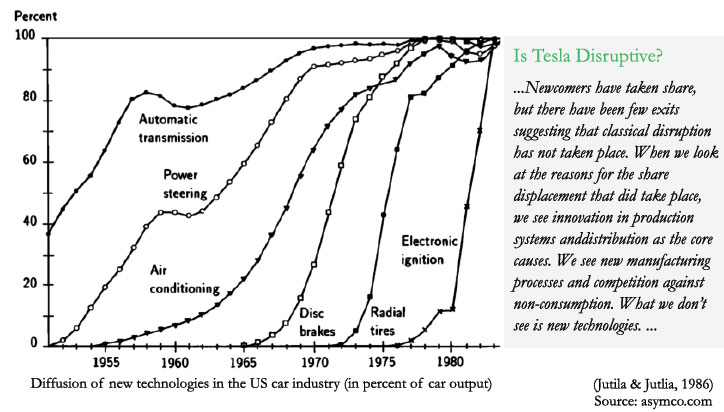 Thanks for this article. I think the author makes a strong case that [in fact] Tesla is disruptive. It is clear the impact Tesla has on gas stations, services, insurers and regulation, points to the tidal shift it has created in its own ecosystem. As for its appeal to a niche, all disruptive technologies appeal to a niche, aka – early adopters.  Finally, and this reveals what the author thinks of disruption, democratization of knowledge, not competitiveness, is the true disruptor. 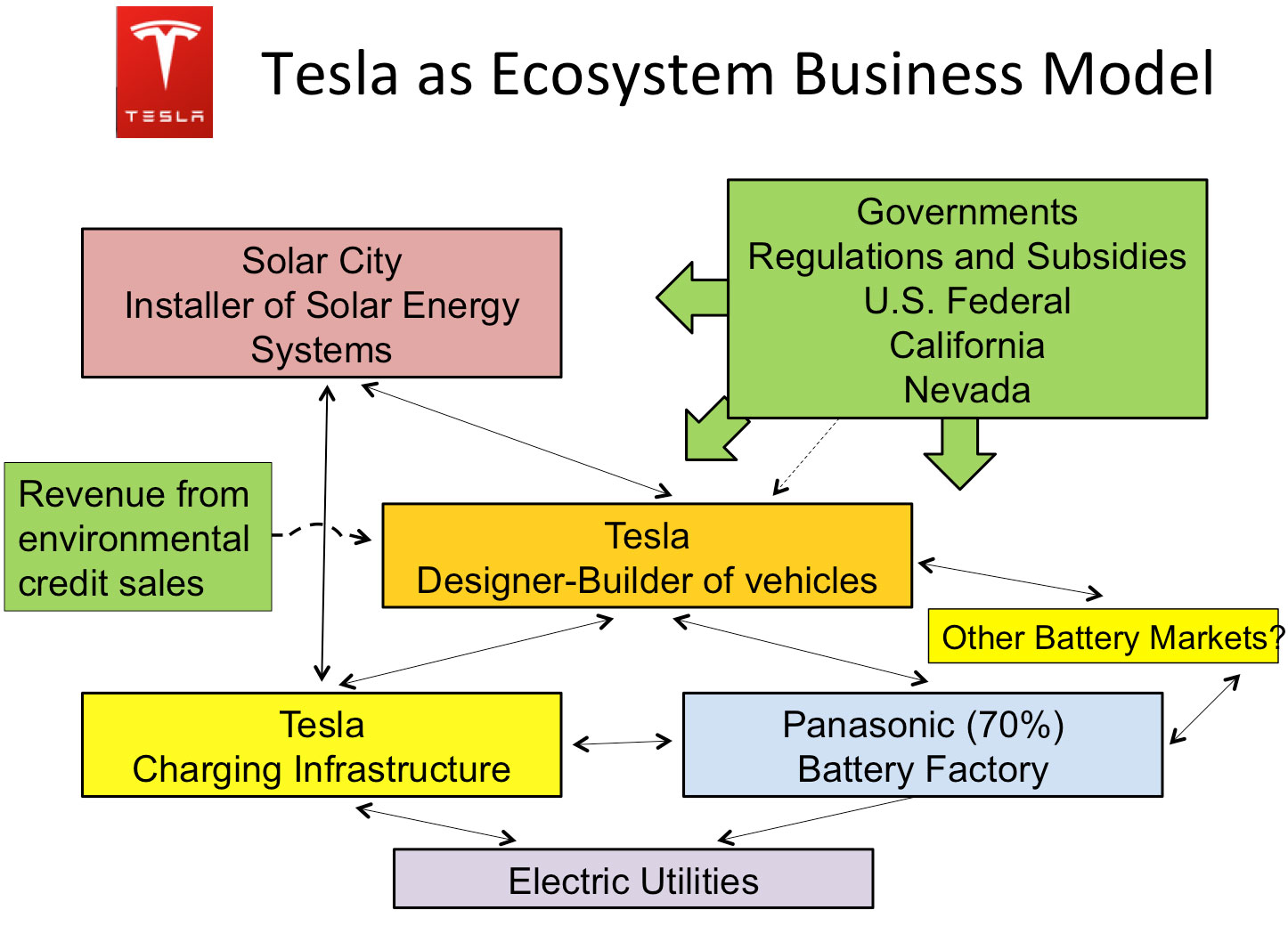 It is indeed thought provoking, but I think the author mistakes the Tesla business model. Viewed simply as a car company, it is plainly capable, but otherwise unremarkable. But viewed as an ecosystem business model, it gains a durability greater than a simple automotive original equipment manufacturer (OEM). Please consider the attached. [as shown in the graph]

AN IMPROVEMENT IN ANY COMPONENT OF THE SYSTEM RAMIFIES THROUGHOUT TO BUILD THE COMPETITIVE POSITION OF THE ENTIRE SYSTEM. I DON’T KNOW IF THAT COUNTS AS “DISRUPTIVE” BUT IT LEADS TO A FORMIDABLE BUSINESS MODEL

I love this tesla case study… One more thought: true disruption takes place when few can see it taking place; very few analysts focus on the difference between small cell and prismatic batteries and, as Dave’s chart shows, the completely different ecosystem, including its retail go to market strategy.

The author claims that if Tesla were disruptive, the rest of its competitors would flee in the opposite direction and they are. Nobody else has committed to small-cell production. The company adopted a strategy of co-opting the cheapest flimsiest battery and incorporating it at scale in your laptop.

I also disagree that Tesla isn’t targeting non-consumption. The company has turned consumers into luxury vehicle buyers (which after shared autonomous vehicles are introduced at scale may be the only meaningful customer segment).

Per Dave [Bodde] they are also not just investing in manufacturing for the vehicles, but putting significant dollars into infrastructure; putting distribution and service models on their head, changing the frequency with which the vehicle sees performance improvements, selling into home battery and grid energy market, etc.

And keep in mind what most people’s association was with electric vehicles before Tesla entered: 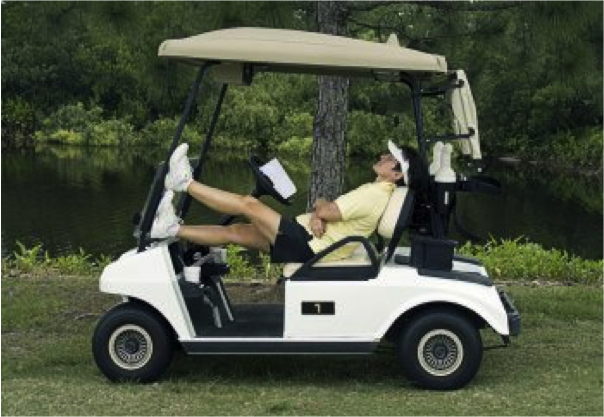 Tesla started with a blank slate supply chain, so maybe for older players it’s easier to go prismatic. Also we have to consider an entirely different type of engineer needed for the small cell batteries.

One could now ask why other automakers are sticking with prismatic instead of small-cell, but they have an existing supply contracts and significant manufacturing and research investments committed to prismatic. With everyone but Tesla doing the same, Tesla’s still as yet small volumes of unprofitable high-priced cars have obviously been inadequate to force a competitive change. Assuming Tesla succeeds with its mass-market offering that costs competitors profitable sales, it will be more likely that others will follow suit. That will also be more likely as existing commitments to current supply contracts expire.

All investors in this age of discontinuity must deal with the issues surrounding disruption, either from the perspective of the defender or the attacker. An investment thesis should make clear what industries/companies are vulnerable to disruption and the most likely pathway(s) that disruption could take. With that as a baseline thesis, unfolding events can be watched to confirm (or not) the choices made. And that is why we have these debates

Tesla Case Study: Horance Dediu’s article inspired the contributors of ARK’s research ecosystem to respond to his challenging question, is Tesla a real disruptor? Addressing the company from many different angles and perspectives, our team disagrees and believes that Tesla is one of the most provocative disruptive innovators of our generation. For more information on Tesla and ARK’s research read: