Tesla [TSLA] claims that the economies of scale associated with its Gigafactory will drive the cost of lithium-ion tesla battery pack systems down more than 30% by 2017. Contrary to conventional wisdom, the decline extends well beyond the battery itself: the breakthroughs will be in the system costs of the battery pack.

Battery prices have been slow to decline. In the industrial technology space, the typical learning rate- that is, the cost drop associated with a doubling in production- is 20%. For batteries, the learning rate is only 10%, as shown below. Optimizing the assembly and design of the systems surrounding the battery will allow Tesla to deliver its promised price declines. 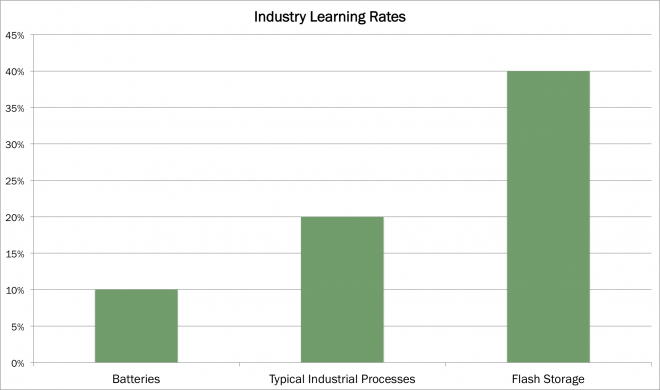 In fact, the price of the tesla battery pack system could drop 40% by 2020. ARK estimates that Tesla delivered its complete battery pack system, including the coolant system, circuitry and pack enclosure, for approximately $400 per kWh in 2013. Tesla battery cells alone accounted for $230 per kWh, or 58% of the total. As shown below, the cost of Tesla’s battery pack system should decline 30% by 2017, and by more than 40% when the Gigafactory scales up to battery production for 500,000 vehicles in 2020. 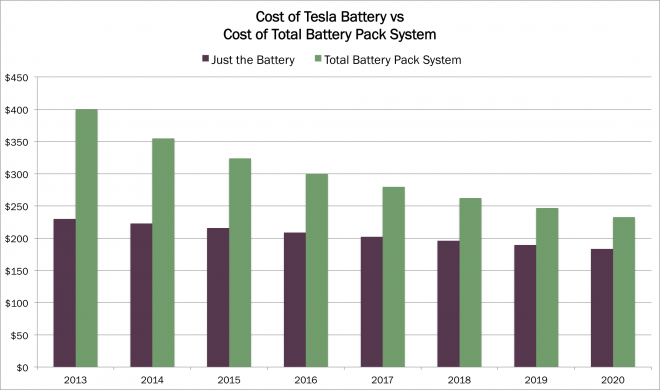 Because Tesla’s batteries are the same as those in consumer electronics (cylindrical batteries, as opposed to larger prismatic batteries used in other EVs), they have been benefitting from the economies of scale and falling prices associated with volume production in the electronics industry. That said, because Gigafactory partner Panasonic [PCRFY] and others have been producing these batteries at scale for some time, future price declines will be moderate. Consequently, batteries will continue to rise as a percent of Tesla’s battery pack system costs, as shown below, because the system costs are falling faster than the battery costs. 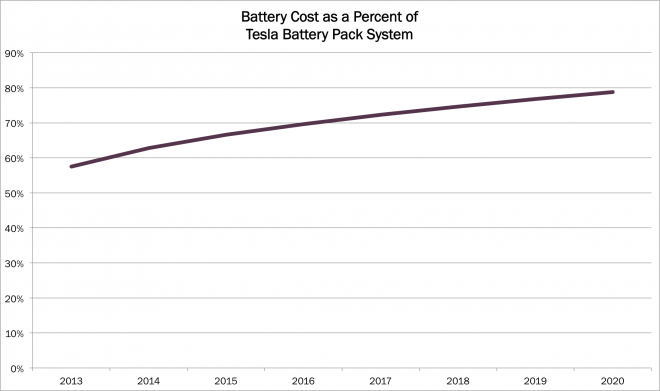 Tesla is unlikely to lose its competitive positioning during the next five to ten years. True, as total global annual EV sales scale from 206,000 units last year to 3.8 million in 2020, the rest of the EV market will enjoy a battery price decline of more than 25% by 2017, and nearly 40% by 2020. Despite this, EV manufacturers’ energy system costs will not drop as rapidly as Tesla’s because they cannot rely on productivity gains from non-battery cell components. Other EV manufacturers do not have such non-battery cell components. As shown below, Tesla will achieve a 30% price decline by 2017, compared to the market’s 26% price decline. 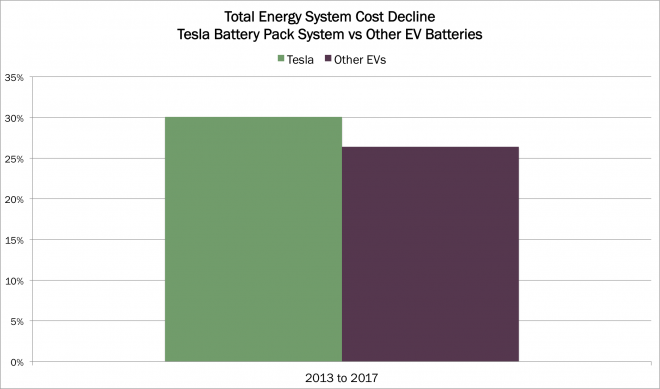