Supercharger: A Charge Could Cost Half the Price of Gas

This article on ‘Tesla Supercharger’ has been updated as of July 11, 2016.

Tesla’s decision is not surprising. ARK had previously speculated that Tesla eventually could charge gasoline competitive prices for the service and turn a profit. Until now the network has served as a prerequisite for Tesla owners, but by offering the upgrade package to Model 3 owners, Tesla will be able to turn superchargers into a profitable infrastructure business.

Whereas most public electric vehicle (EV) charging stations require hours of wait time to charge a car, a Tesla Supercharger only requires 20 minutes for a full charge—a compelling service at a compelling price—and a canny strategic offering by the company as it attempts to spur widespread EV adoption.

The reason Tesla had offered supercharging to its Model X and Model S customers for free is straightforward: the service would be price-prohibitive otherwise. To generate a reasonable return on investment today, it would have to charge customers roughly $80 [1] to charge a battery fully. Why so expensive? Supercharger utilization rates are low, just 5% as of the third quarter of 2016, while startup costs are high, at roughly $270,000 per station.[2] Tesla has spent more than $170 million [3] to build out this infrastructure.

Evidence shows that Tesla owners are finding the network increasingly useful and convenient. At the start of 2015 typical Tesla owners used a supercharger for 6% [4] of their annual energy needs, but by May of 2015 that average had climbed to 10%.[5] The majority of charging will be done at home, but this increase in supercharger uptake demonstrates that owners appreciate the option.

The number of Tesla drivers in the US who own supercharger compatible cars is poised to soar from roughly 90,000 [6] to about 780,000 by 2020 assuming 30% of cumulative production is sold in the US.[7] ARK estimates that Tesla could price the supercharging for life upgrade at about $1,000. ARK believes the utilization levels of supercharging stations will approach the same level of gas stations by the early 2020s, driving the cost per charge down to roughly $16. As can be seen below, given today’s gas price, a charge would cost half as much as putting 300 miles of range into a BMW 3-series.[8] That said, neither service would be cost-competitive when compared to the economic efficiency of charging at home. 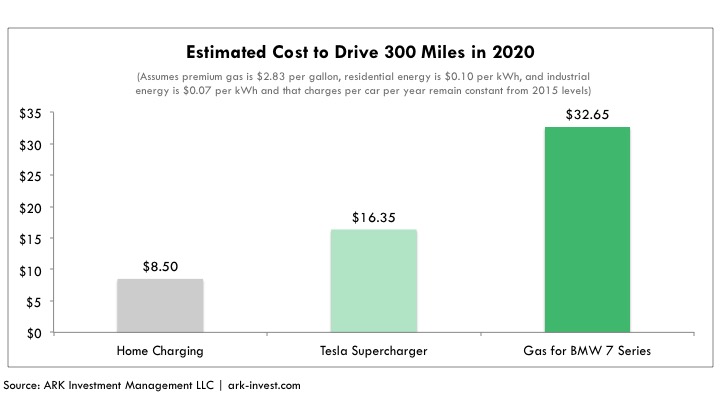 This analysis could understate the likely utilization rate of the supercharging network. More automakers may build supercharging standards into their cars because Tesla has opened up its patents. By 2020, with 390 [9] superchargers nationwide, utilization rates could rise to roughly 90% if 80% of EVs on the road were supercharger compatible. In that theoretical case, the cost of a charge would decline to about $9.50.[10]

Today, the 160,000 [11] gas stations in the US have a utilization rate of 34%,[12] primarily because of the maturity of the installed traditional auto base. By contrast, EV charging stations are unlikely to pop up on every corner because owners often choose the convenience of charging their cars at home. However, ARK’s research shows that as more Model 3’s hit the road, utilization rates of supercharger stations will approach those of gas stations, demonstrating a clear need for the network.

Ultimately, Tesla could spin off its network or sell it to a third party like The Car Charging Group [CCGI]. All EV charging companies stand to benefit from higher utilization rates as EV adoption increases over the next decade. Consumers stand to benefit from affordable prices for charging which, even after the recent drop in oil prices, could be lower than rates at any gas station.