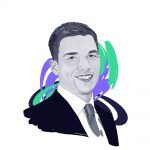 Video streaming services don’t need great content to grow: they need content, period. While counterintuitive at first, think about your own viewing habits. Are you watching only programming that has been nominated for Emmy and Oscar awards? If not, you are not alone. Unscripted reality shows account for roughly 70% of primetime TV consumption, suggesting that many viewers are okay with mind-numbingly average content.[1] While quality content is important, other factors are going to determine success in the ‘Streaming Wars’.  We believe the winners will have the most content, not just the best.

Exceptional content requires active, committed viewing, but most users consume content passively, as background noise. In other words, streaming services are unlikely to thrive if they are creating nothing more than the next big hit.

We believe Netflix understands the difference between active and passive viewing better than any other content company. Except for its transition from DVD rentals to on-demand video streaming, we believe the most ambitious and important strategic move Netflix has made was into original content. In 2013, Netflix released House of Cards, the first of many original series in its vast library of original content. According to our estimates, original content accounts for roughly 25% of Netflix’s titles in the US today. In 2019 alone, Netflix produced more than one unique piece of content per day on average – 371 new TV shows and movies, or more than all of the shows that the US TV industry released in 2005.

Are all of Netflix’s latest shows and films hits? No, as shown in the graph below, the content that Netflix produces is ranked as “average”. In fact, according to IMDB, since 2013 the average score on its original movies has dropped roughly 20% to ~6.37/10. 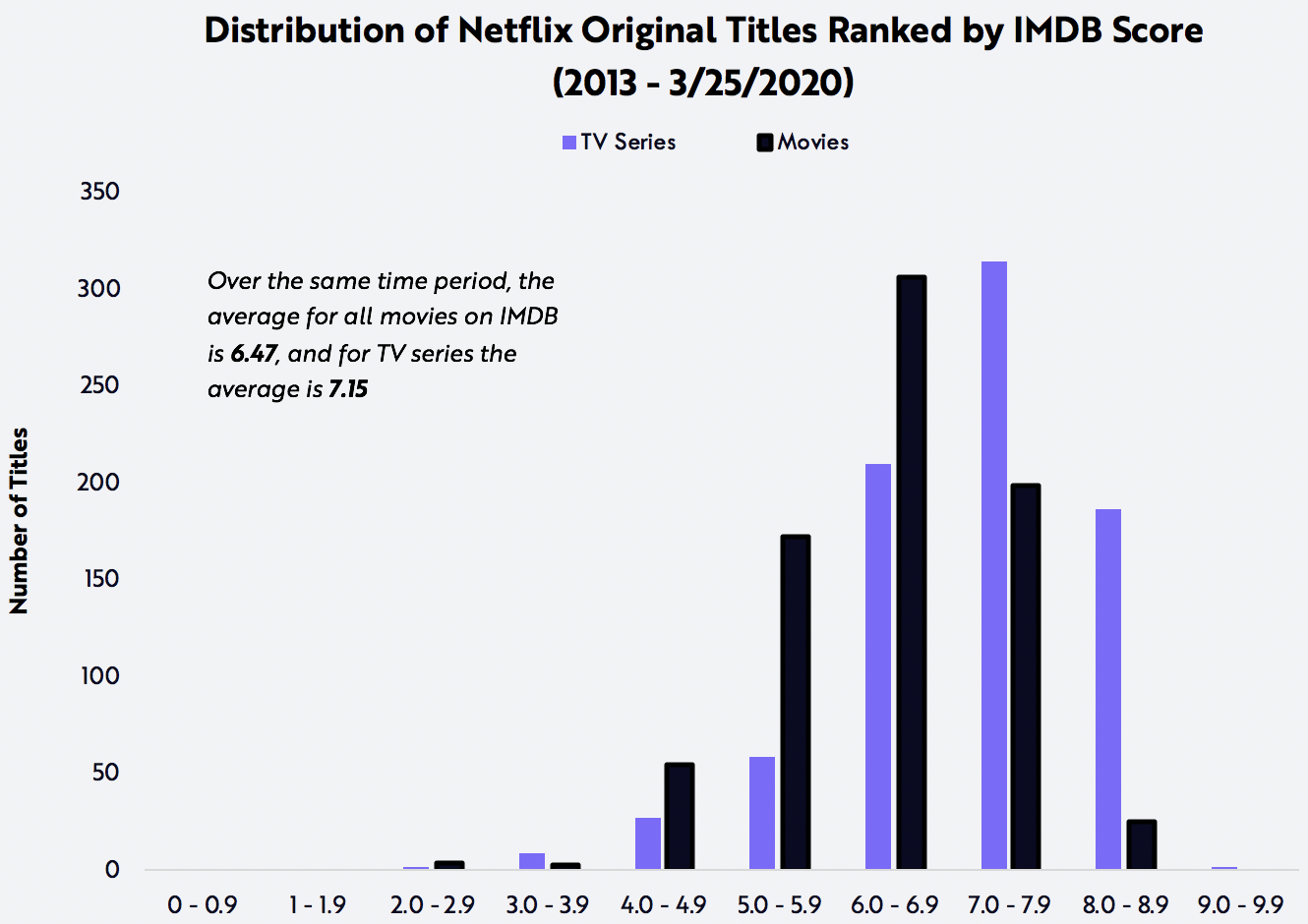 Perhaps one reason for the drop in quality, Netflix has shifted its focus from movies to TV shows, as is also shown in the graph above. While movies often attract customers to its platform, TV shows help with their retention. During the past ten years, Netflix has increased the number of TV shows on its platform, cut the number of movie titles, and in the process doubled the total number of content minutes available, as shown below. As a result, 36% of all minutes available on Netflix are from original programming. 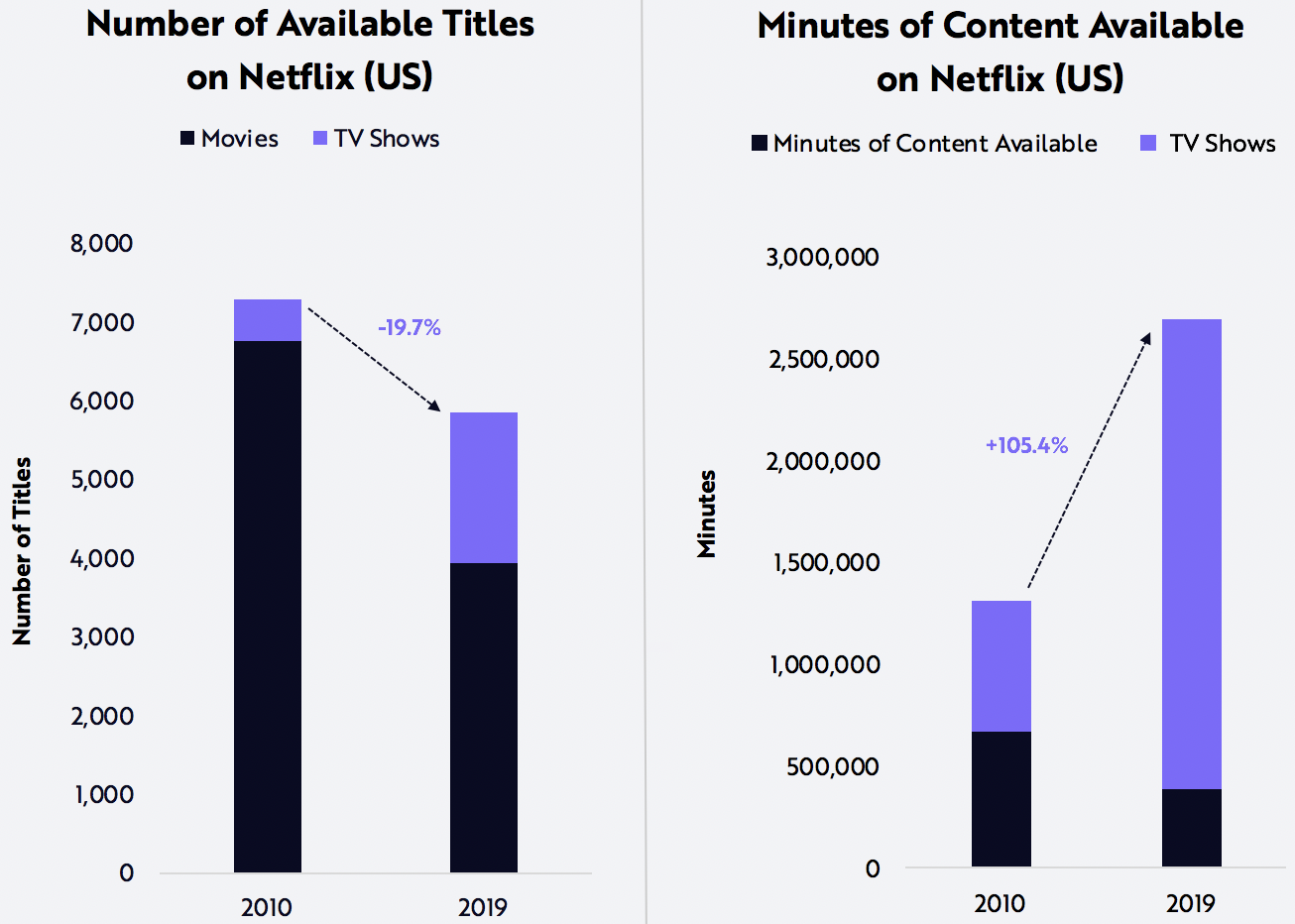 More important than the quantity of content streamed is the ability to match them with viewers. Again, no other service appears to compare to Netflix in concentrating viewership with the right shows. As shown in the graph below, 16 of its top 20 content pieces, or 80%, have reached more than 35% of its user base. For perspective, in 2019 only 15%, or 3 of the top 20 rated ‘telecasts’ to air on cable – all of them football games – reached more than 25% of US households. Only two of the twenty, or 10%, were scripted TV shows, the rest either live sporting events or award shows. 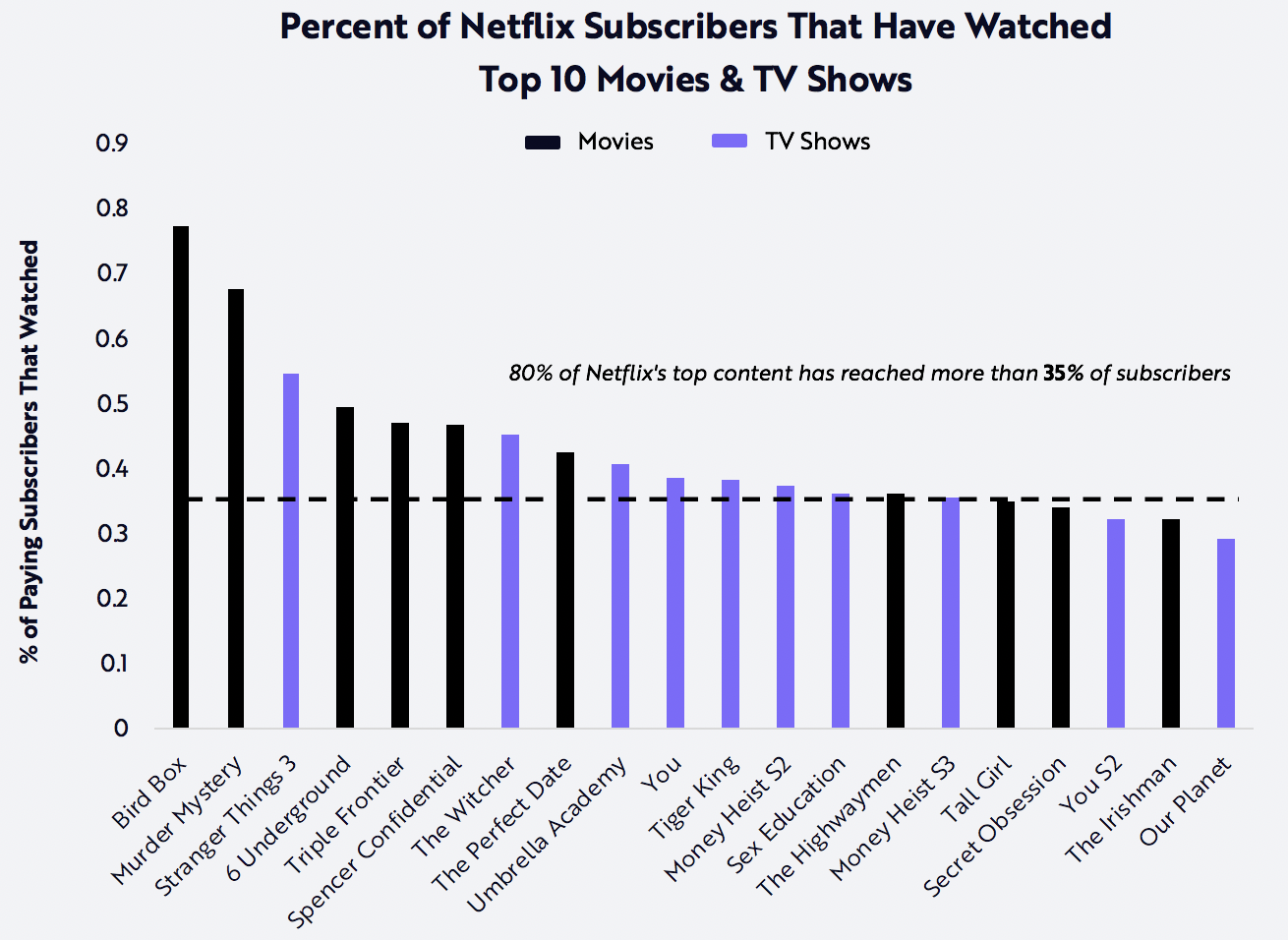 What can we learn from the evolution of Netflix’s content strategy? First, quality content can attract new users, but a robust library of content seems to be essential to retaining them. Second, content diversity increases user engagement while a variety of genres, formats, and languages attracts new viewers. Finally, we believe quality content eventually gives way to quantity: most users will not binge three Martin Scorsese films, but they will consume an entire season of Tiger King. Consistently building and broadening its library of content, Netflix appears to have set itself apart from the competition, including linear TV.