Investigating Bitcoin 2 | 5  A series of articles investigating the disruptive potential of bitcoin and evaluating it as a currency.

As of August 1st, 2015, approximately 14.5 million bitcoins had been created which, at its US dollar exchange rate on that day of around $280 per bitcoin, implied more than $4 billion in stored value. If bitcoin is to function as a reliable store of value, owners must be able to hold them for months or years, trusting they will maintain or, even better, appreciate in value over time.

On May 22, 2010, Laszlo Hanyecz famously paid 10,000 bitcoins for two pizzas, establishing its initial purchasing power at a quarter of a penny per bitcoin. After that initial marker, the price labored for a number of years before soaring in 2013. On November 2013, it hit an intraday high of $1242, higher than one could have purchased an ounce of gold for on the same day. If Hanyecz had offered 10,000 bitcoins for two pizzas at the August 1st price of $280, Hanyecz’s pizzas would likely go down as the world’s most expensive pizzas at the equivalent of $175,000 a slice.

While bitcoin has enjoyed enormous price appreciation over the longer term, it also has been highly volatile. Value at risk identifies the upper and lower bounds of expected price volatility. Using price action from May 2014 to May 2015, the graph below has error bars (per the definition of value at risk), that display with 95% probability what an investor might expect a $100 investment to be worth at the end of May 2016.[1] While a common financial statistical technique, it should be noted value at risk assumes a normal distribution, which most assets do not strictly follow. At 95% probability it also says nothing about the potential magnitude of losses (or gains) in the remaining 5%. 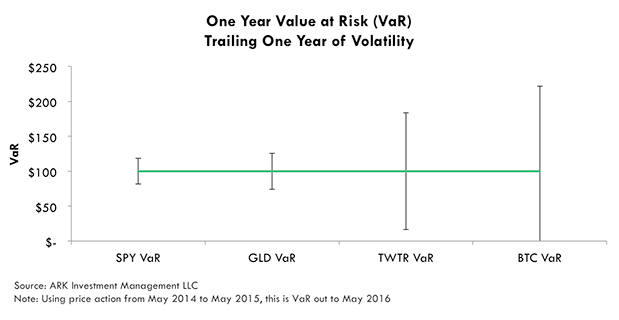 Although bitcoin volatility has been extreme, it has stabilized somewhat after hitting an all time low of $176 in mid January. For example, its one year value at risk out to May 2016, based off March, April and May 2015 volatility, improved to resemble that of Twitter’s [TWTR] stock in the same period. While bitcoin differs from the three securities it is compared to below, ARK Invest believes such a comparison displays how it fits in amongst other aspects of the broader U.S. stock market. 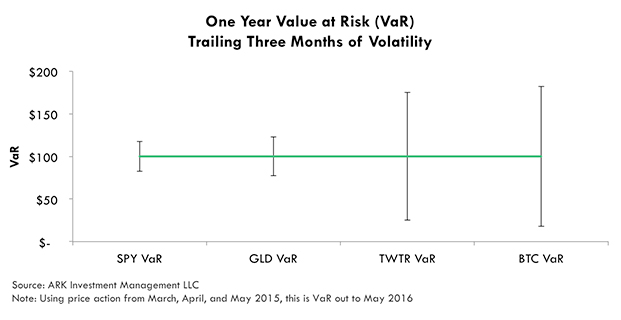 If bitcoin’s volatility were to continue to diminish, investors might become more comfortable holding it as a store of value. That said, with increased risk comes increased potential return. During 2013, the bitcoin rate of exchange increased by a factor of about 55 from $13 to $750 per bitcoin, and volatility seemed like a good thing. By May 2014, however, six months after it hit its high, the price of bitcoin had collapsed by two thirds. Among the reasons for the drop were two scandals, the biggest being the Mt. Gox exchange collapse, as well as fear of regulation following bitcoin bans in China and Russia. By May 2015 the exchange rate had dropped another 50%, from the mid $400’s per bitcoin in May 2014 to $230, per CoinDesk. 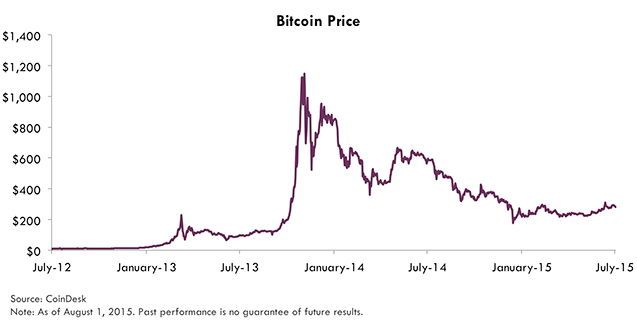 As a result of the collapse, the value of bitcoins in circulation dropped $8 billion,[2] or nearly 60%, in the six months after November 2013, and another $1 billion in each subsequent six-month period, as shown below.[3]

Every disruptive innovation must weather storms, and bitcoin’s resilience at and since its bottom has been notable. After dropping below $200 in January of 2015, the bitcoin price broke through resistance and maintained strong support at its 200 week moving average, which as of August 1, 2015 is at $227.[4] Nonetheless, its rapid and unpredictable moves have convinced many observers, including much of the media, that it cannot play money’s role as a store of value, even though both the longest standing store of value — gold— and the dollar itself have seen more than their share of violent swings.

Yet, bitcoin should benefit from a distinctive attribute, one that the media and other detractors appear to disregard, that could give it an advantage over all fiat currencies as a store of value: unlike fiat currencies, it is designed to be limited in supply. While individuals, institutions and governments can expect the dollar to remain fairly stable over short-term periods of months or even years, history exposes a chilling fiscal truth. Over periods of many years the dollar has lost and probably will continue to lose much of its value, as the expansion of its supply rises relative to that of its demand. In fact, the dollar is only worth 4% of what it was a hundred years ago. Inflation is not isolated to the USD, but has damned every fiat currency in circulation. For example, the British pound, one of the longest-standing currencies, only retains 0.5% of its initial value. Voltaire, famous French Enlightenment thought leader, is famous for saying: “Paper money eventually returns to its intrinsic value— zero.”

bitcoin is designed so that over time it will suffer from less and less inflation because algorithms, developed by the Bitcoin [5] community at large, mathematically meter its supply. New coins are minted through mining, a process during which miners verify and compile bitcoin transactions into blocks. Each block adds a record of transactions to the blockchain, and the Bitcoin software awards a fixed amount of new bitcoins to the miner who submitted the block, regardless of the number of transactions in that block. These awards are referred to as “block rewards,” and are the only way new bitcoins can be created. The block reward started at 50 bitcoins in 2009, and will divide in half roughly every four years. Currently, a block reward is worth 25 bitcoins, or $7,000 at a rate of $280 per bitcoin. Total bitcoin supply will converge on its limit of 21 million coins by half steps, reaching that limit by 2140. Such a progression will lead to a rapid deceleration in bitcoin supply expansion, and therefore a likely preservation of its buying power over time, as shown below.

Since its inception in 2008, bitcoin supply has expanded rapidly, and since the end of 2013 much more rapidly than the demand for it. This year, the growth in supply will be roughly 10% which, given its recent stabilization in price, could be close to the growth in demand for bitcoin. Assuming no change to the protocol, over coming years the growth in bitcoin supply will decelerate and eventually approach 0%. Given its predictable growth and ultimate fixed supply, bitcoin could become a store of value superior to fiat currencies in the long term. The trajectory of bitcoin’s supply growth will not change, unless the economic majority agrees to it.

price volatility is a reflection of the birthing pains of this fundamentally sound platform. In particular, bitcoin’s limited adoption is hampering liquidity. The behavior of a few large holders has caused wild swings in the price of bitcoin, while the decisions of occasional dabblers has caused tremors. Michael Moro of Genesis Trading, the largest over-the-counter bitcoin market maker, has noted extreme cases in which a $500 purchase (a little less than two bitcoins at August 1, 2015 prices) has caused a 1% change in the bitcoin price on Bitfinex, one of the most liquid US dollar bitcoin exchanges.[6]

bitcoin has lots of headroom for its liquidity to improve, as its transaction volume averaged only $50 million per day from August 2014 to August 2015.[7] For example, global foreign exchange trading volume in 2013 was 100,000 times greater, at $5 trillion per day. As bitcoin’s liquidity increases and exchange volumes improve, its volatility should diminish. Then the combination of its open source network, its metered supply, and its global decentralization could earn it the role of a trusted store of value.

Ironically, bitcoin’s attraction as a long-term store of value could hamper its adoption as a means of exchange, particularly if it were to appreciate in the face of limited supply gains. Economists and currency experts often posit that gradual inflation in the supply of fiat currencies is desirable, warding off deflation, depression, and hoarding. This line of thinking could convince the Bitcoin ecosystem to tolerate a whisker of inflation, with supply increasing slightly relative to the demand for bitcoin. Such a change would require approval from the economic majority and a protocol software update to mining machines.

Major financial institutions are sensing the disruptive potential of Bitcoin and its underlying blockchain to facilitate stores of value. In 2015 alone, the New York Stock Exchange invested in Coinbase and created the first exchange-calculated bitcoin index (NYXBT), while the NASDAQ partnered with bitcoin startup, Noble Markets, and also declared that it will leverage the blockchain for financial securities’ transactions. Goldman Sachs co-led a $50 million dollar round in Circle, a bitcoin based consumer finance company, and Blythe Masters, former global head of commodities at JP Morgan, decided to accept a position as Chief Executive of Digital Asset Holdings. In April of 2015, Barry Silbert, a long time and well regarded Bitcoin venture capitalist, said at the Inside Bitcoins NYC conference that nearly a billion dollars have gone into Bitcoin startups in the last 24 months.[8. “The Currency Still Matters,” InsideBitcoins NYC, attended April 2015.] At the same conference, many longtime attendees commented on how many “suits” were in attendance this year.