The Smart Speaker Conundrum (Part I)

ARK’s research suggests that more than 50% of US households will have at least one smart speaker by this time next year.[1] In other words, the adoption of smart speakers is happening at a record rate, with only 3 years between early adoption and mainstream adoption, as shown below. With such early success, many forecasters are declaring that speakers will succeed smartphones as the next big platform play. 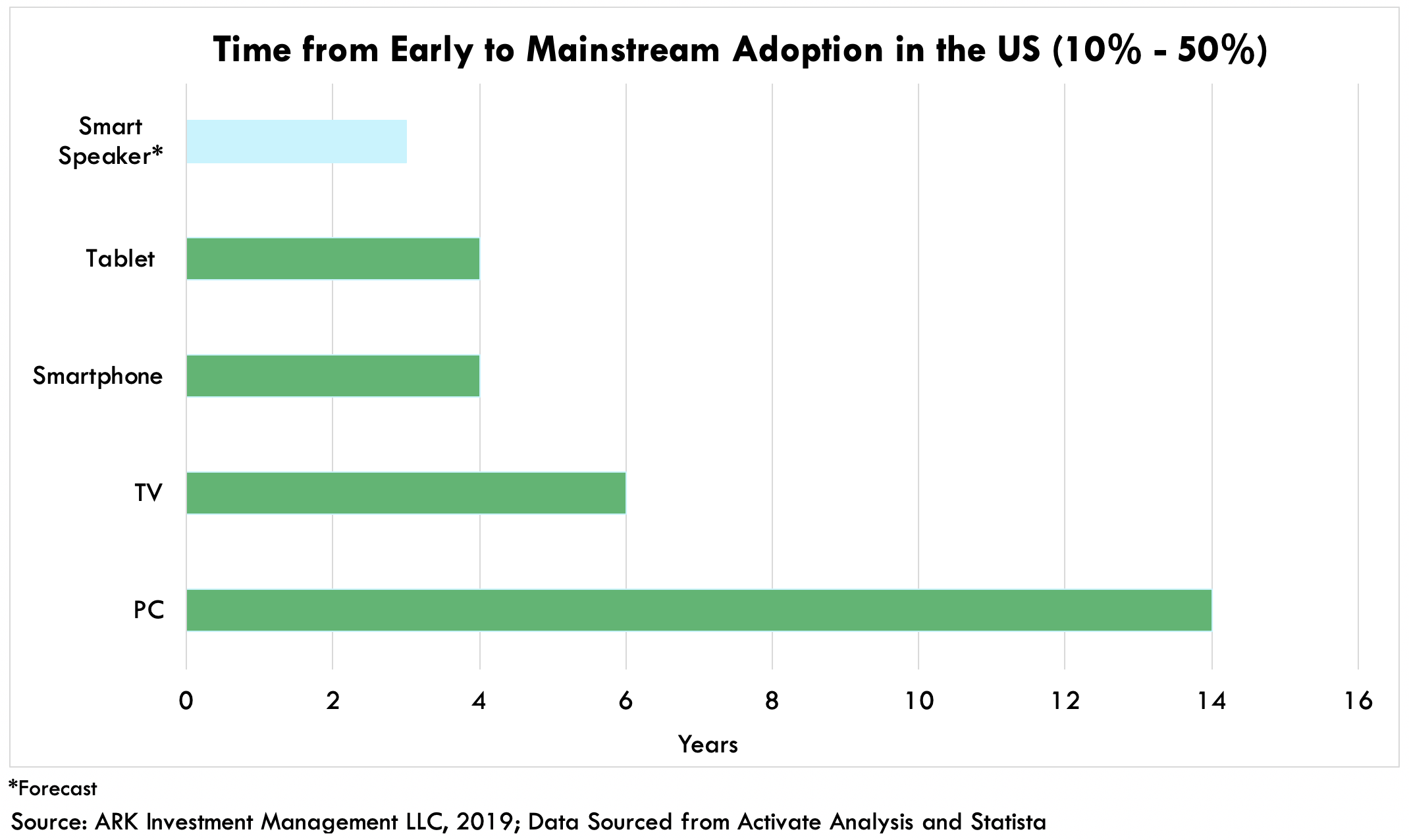 Despite their record rate of adoption, smart speakers seem to be missing a key ingredient for platform success: developers. Why?

During early days of the iPhone in 2008, Apple launched the App Store which encouraged and enabled developers from around the world to build applications on its platform. As the App Store gained traction, iPhone sales soared, increasing financial incentives for the developers contributing their apps to the App Store. Thanks to this virtuous cycle, the iPhone and the App Store enjoyed remarkable success.

We believe that Amazon hoped to replicate Apple’s success with the Alexa Skills Kit, the smart speaker “app store” and developer platform launched in 2015. More than three years later, the results seem to suggest that: most developers are not betting on voice-controlled smart speakers as their next platform opportunity. As of year-end 2018, the number of Alexa Skills had hit more than 80,000 which, while impressive at first blush, pales in comparison to the 425,000 that Apple’s App Store featured roughly three years after its debut, as shown below. In other words, based on the number of skills/apps, Alexa has enjoyed less than 20% of the iPhone’s success at this point in its development. Based on another metric, it has been even less successful. Since the launch of Alexa Skills Kit, ARK estimates that developers have spent only $450 million to develop Skills, less than 5% of the $16 billion we believe was invested in IOS app development three years after the release of the App Store.[2] 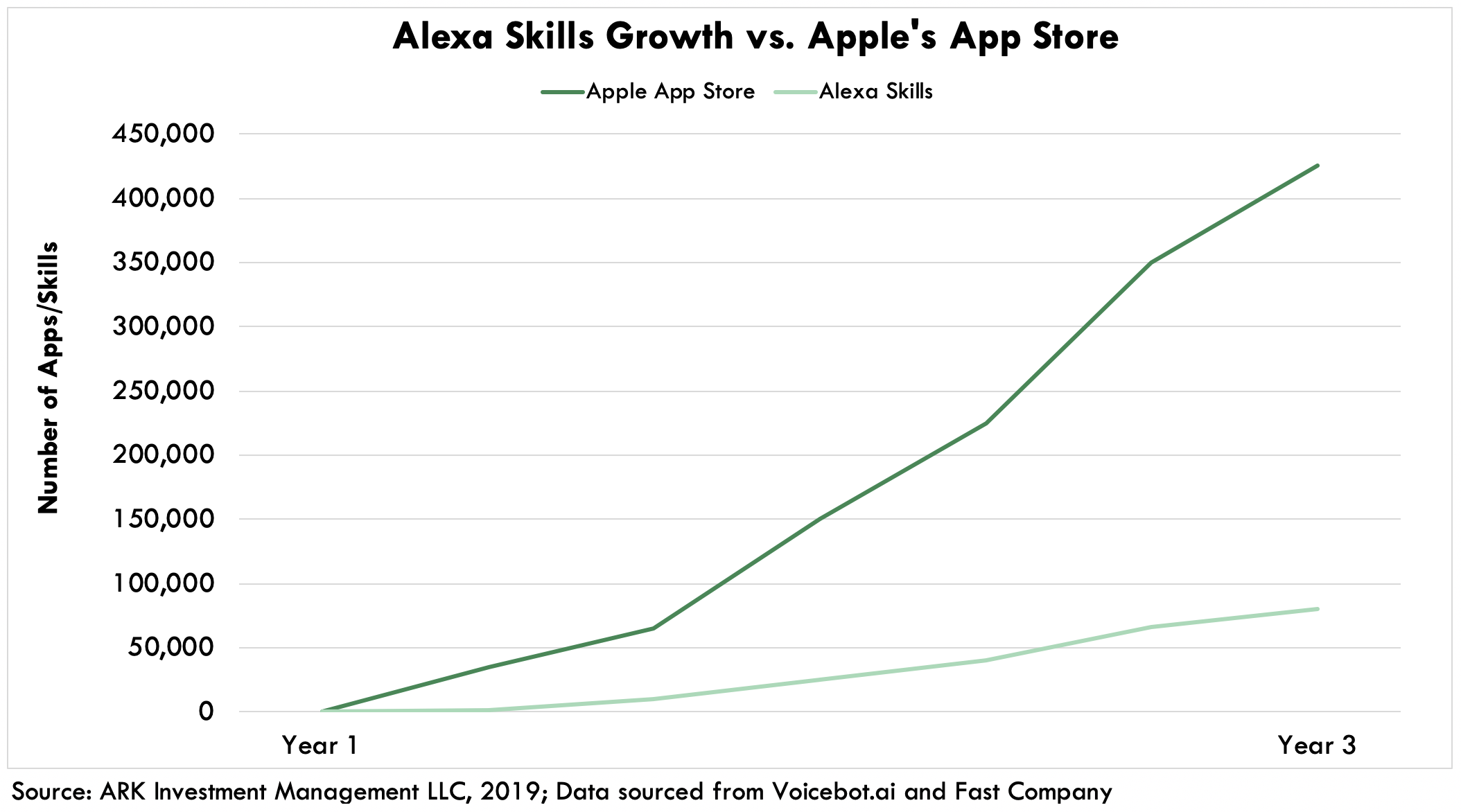 Why then are Alexa speakers being adopted at a record rate? Perhaps the biggest reason is that, as Amazon, Google, Apple, and others fight to dominate smart homes, smart speakers, particularly Alexa, seem to have become the best bargains in the speaker space.[3]

Beyond bargain basement pricing, however, companies developing smart speakers have not been able to develop effective ways to help consumers discover new capabilities or to help developers monetize their skills. Users like the music, timer, news, and weather that the speakers offer, but they haven’t discovered anything smarter or more creative. Typically, they have to search for and access new skills through mobile phone apps which are one step removed and seemingly one step too far.

As a result, low user engagement has discouraged creative development.[4] Thus far, developers have found few monetization options for their skills on smart speakers. Recently, Amazon introduced in-skill purchasing which could work, but their monetization attempts have not been successful in the past.

As their novelty wears off, smart speakers probably will stall out in the absence of a vibrant skill or app marketplace. A few “killer” skills/apps could turbocharge user engagement. While music, convenience shopping, and smart home connectivity come to mind, please stay tuned for Part II of our research on this topic.