The convergence of next-generation sequencing (NGS), deep learning, and other life science technologies has made blood-based cancer detection a reality that should improve in accuracy, decline in cost, and expand to a range of cancer types. Thanks to their laser focus on specific cancer types, Single-Cancer Earlier Detection (SCED) tests have the potential both to detect very early-stage disease and to provide a more user-friendly experience that encourages adherence to follow-up procedures.  Some colorectal cancer (CRC) screening tests have shown 94% sensitivity[1] for early-stage (I/II) tumors, while others boast >57% sensitivity for dangerous precancerous lesions like advanced adenoma, giving oncologists the ability to detect cancer earlier and to prevent it. Ultimately, we think SCED tests will provide illuminating results for specific cancer types and align well with established care pathways, hastening their adoption in the healthcare system.

Lung cancer, the leading cause of cancer death worldwide, offers a compelling case for SCED testing. Recently, the United States Preventive Services Task Force (USPSTF) lowered the threshold for lung cancer screening from 55 years old to 50 and from >30 pack-years of smoking to  >20 pack-years––nearly doubling the high-risk population in the US to ~15 million eligible individuals. Even with reimbursement and guideline inclusion, less than 12-15% of high-risk persons adhere to annual screening guidelines, one reason most lung cancers are not diagnosed until advanced stages.

Delfi Diagnostics, a private company based in Baltimore, leverages the power of deep learning on a cancer signal called “fragmentomics” and is seeking to commercialize a non-invasive screening test for lung cancer. Based on its recent paper, we estimate that the cost-of-goods-sold (COGS) for Delfi’s test at commercial scale would be roughly $50––as inexpensive as low-dose computed tomography (LD-CT)––which could smooth its path into the clinic. Based on our analysis, a test like Delfi’s could fit into the lung cancer care pathway as shown below.

The charts[2] below assume that overall screening will increase from 15% to 60%, similar to that seen in other screening modalities, and that 100% of patients with positive liquid biopsy results will adhere to follow-up LD-CT screening.[3] Our model also sets LD-CT sensitivity at 95% and specificity at 60%, in-line with the USPSTF’s recent evidence report. Instead of standalone metrics for Delfi’s screening test,  we used the combined (Delfi + LD-CT) stage-specific sensitivities (Stage I = 87%, Stage II = 86%, Stage III = 97%, and Stage IV = 96%). We locked specificity at 80%, a substantial increase over LD-CT’s 60% specificity, and assumed that those who opt for LD-CT first and test positive will reflex to a confirmatory procedure (e.g., Veracyte’s (VCYT) Percepta) instead of a second round of screening. Based on these inputs, we believe that a combined Delfi-like screening test + LD-CT screening strategy could quadruple the number of lung cancers detected through screening while reducing cancer detection costs, including overtreatment, as illustrated below.[4] As these data illustrate, upstream patient stratification and downstream follow-up procedures can have a significant impact on the overall cost and utility of earlier cancer detection. 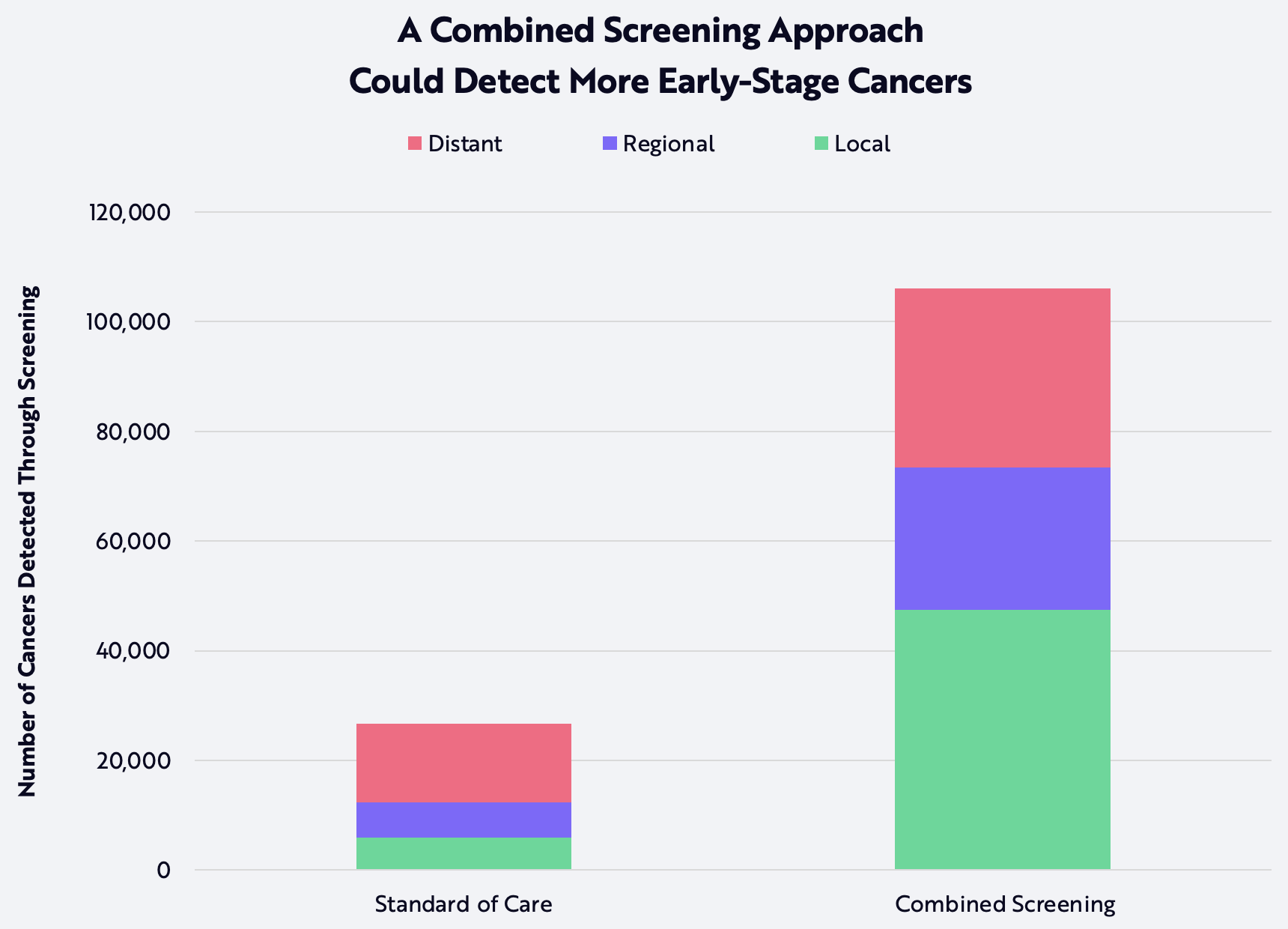 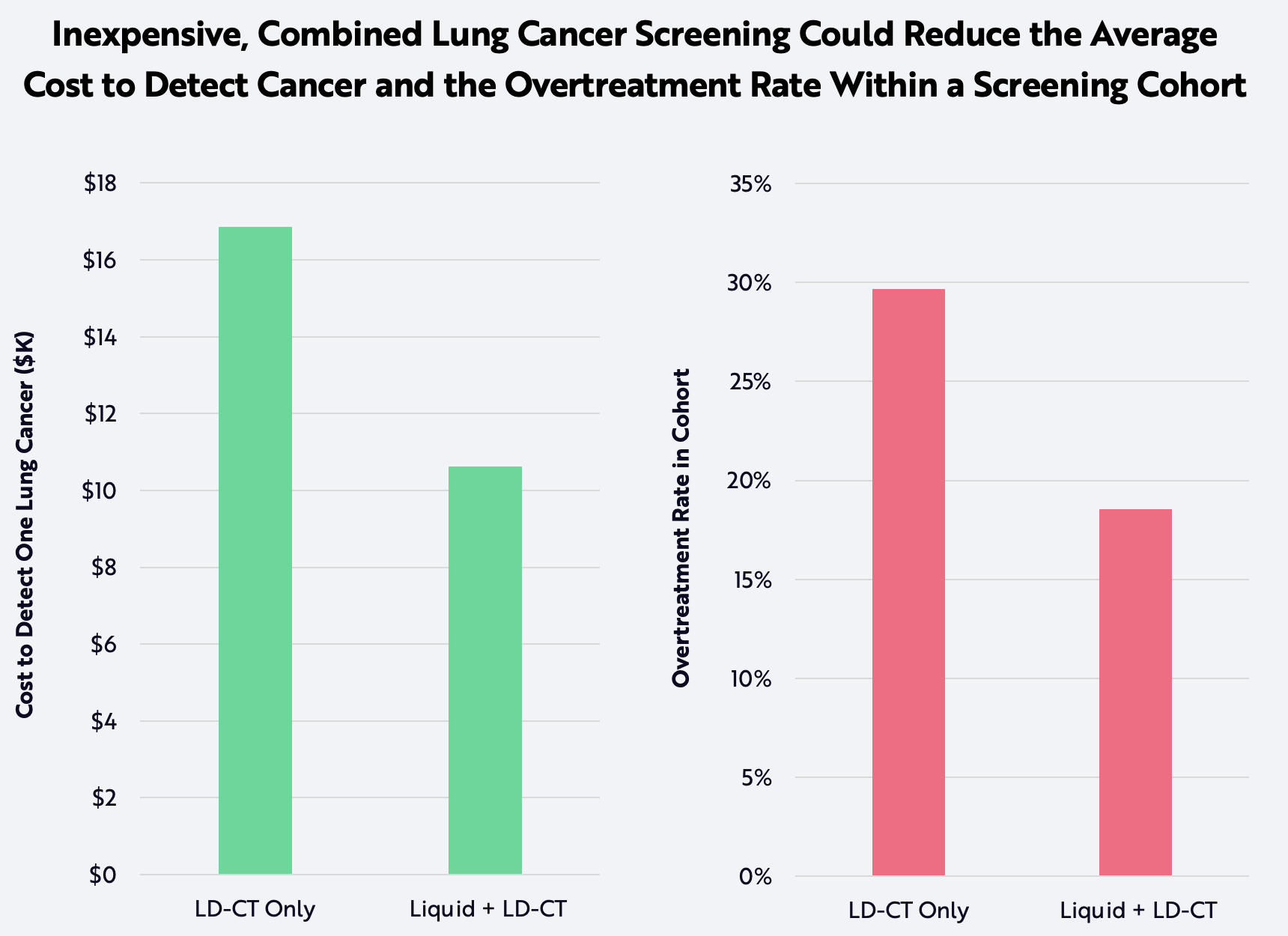 Existing healthcare and regulatory systems are primed to adopt innovative single-cancer screening strategies. Currently, the USPSTF uses an evidence-based framework to grade screening on an A-D scale and evaluates tests prior to their consideration by the Centers for Medicare and Medicaid Services (CMS). While not required to launch a laboratory developed test (LDT) service, many physicians consider FDA Approval as important for adoption. Because several cancer types already have an A or B screening recommendation, test providers are likely to focus on them given the likelihood of CMS reimbursement. For cancers like pancreatic with poor screening, better single cancer screening tests should compel the USPSTF to upgrade their ratings. Although patient-pay options probably will exist, reimbursement is likely key to the widespread adoption of screening.

The speedy translation of novel single-cancer screening strategies also could accelerate the development and adoption of multi-cancer earlier detection (MCED) tests. As diagnostic providers commercialize single-cancer tests, they will build critical infrastructure, institutional know-how, and brand recognition that should propel multi-cancer testing. Importantly, the scientific and technological overlap between single- and multi-cancer detection is immense—enabling companies engaged in both to leverage research and development.

Ultimately, multi-cancer testing will be necessary for cancers not amenable to single-cancer tests.  Thanks to better sequencing technologies, new biomarker discovery, and expanded machine learning (ML) training sets, researchers should continue to improve the performance of MCED tests. We imagine a future of genome-informed cancer prevention that encompasses risk prediction, single- and multi-cancer screening, and a suite of tools used to expedite treatment and mitigate overtreatment.

Despite its tremendous potential, multi-cancer testing faces unique challenges as a first-of-its-kind offering. Because they’re aimed at large, average-risk groups, MCED tests are optimized for high specificity—a low false positive rate. It is difficult for MCED tests to have high specificity and sensitivity simultaneously. As a result, MCED tests struggle to detect very early-stage cancers. In a recent study, one MCED test achieved 77% sensitivity for Stage III tumors and only 17% for Stage I tumors. Adherence to post-result follow-up is also a concern. Some multi-cancer tests aim to predict a cancer’s tissue-of-origin (TOO), ostensibly streamlining the diagnostic pathway. While TOO predictions of true positives can be quite accurate (89%), they always are incorrect in cases of false positives. Since the incidence of cancer in the average-risk asymptomatic population aged 50-70 years is roughly 1%, we estimate that more than 60% of overall TOO predictions will not indicate a tumor. Although issues relating to accuracy and follow-up are likely to improve, they pose challenges to adoption in the near-to-medium term.

The technologies that power liquid biopsies for cancer––next-generation sequencing (NGS) and machine learning (ML)––apply across the continuum of cancer care. Specifically, germline testing and molecular prognostic testing could improve the up- and down-stream “bookends” of cancer screening. As a reminder, germline testing aims to understand genetic predispositions to diseases like cancer, whereas prognostic testing analyzes tumor tissue for the level of aggression.

Aging, smoking, and hereditary cancer predisposition are significant contributors to lifetime cancer risk. Given the ongoing discovery of new risk-conferring variants and the growing adoption of polygenic risk scores (PRS), hereditary genetics is likely to play a larger role in determining cancer risk, potentially increasing the number of individuals eligible for screens and identifying the prevalence of disease by cohort––a major contributor to the overall health economics. Finally, risk-prediction models that incorporate germline genetics could help physicians fine-tune the type and frequency of screening.

Companies like Veracyte (VCYT) have demonstrated the power of molecular prognostic testing in the lung cancer care pathway. Last year, Veracyte launched a nasal swab test that helps physicians determine whether suspicious lung nodules are malignant or benign. Separately, it has built a franchise around its Percepta Genomic Classifier, a minimally-invasive risk stratification tool for inconclusive bronchoscopies. These molecular prognostics improve cancer screening by mitigating overtreatment and ensuring timely treatment.[5]

Diagnostic labs probably will combine both single- and multi-cancer screening strategies. Several powerful single-cancer tests are likely to emerge while multi-cancer screening technologies continue to incubate. Single-cancer tests will benefit cancer types linked to high-risk groups, underutilized screening, and ultra-sensitive detection.  With sustained improvement and increasing evidence, multi-cancer earlier detection (MCED) could emerge as the frontline screening tool for tens of millions of average-risk individuals in the years ahead.

Thoughts or questions about the article? Let us know!