If World Health Organization (WHO) estimates are correct, the current Ebola outbreak could be out of control: as of mid-October, it has killed over 4,000 people and could cost the three most impacted countries Guinea, Liberia, and Sierra Leone $815 million dollars, or 6% of GDP. In the worst-case scenario, Liberia could lose over $230 million, 12% of the country’s GDP. In addition, the potential death toll is tremendous, potentially reaching anywhere from 12,000 to 120,000 by the end of this year, as shown in the graph below. For the whole of West Africa, at the high end of loss estimates, the hit will be more than $25 billion through 2015.[1] 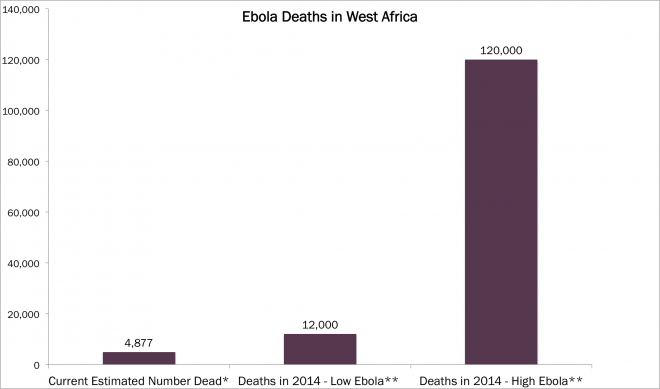 To make matters worse, a study suggests that the Ebola virus already has mutated roughly 50 times. The ability of viruses and bacteria to mutate rapidly means that as sequencing costs decline [2] the technology will have an important role in future epidemics.

DNA sequencing has been used to track epidemics in the past, but its role in the present is clear: if a pathogen mutates in such a way that diagnostics can no longer detect it or treatments no longer kill it, the results can be catastrophic. Consequently, anticipating and tracking genetic mutations will be paramount to containing an epidemic.

The question about which sequencing technology will be used remains open. Illumina [ILMN] is the market leader and can offer sequencing at the lowest price per sequence. However, Pacific Biosciences [PACB] is the leader in the long-read sequencing technology used in microbial research. Both of these machines are large and unwieldy, difficult to transport and install on the frontlines of an epidemic.

For this reason the minION USB DNA sequencer by Oxford Nanopore, a private company, may be the best positioned at only four inches long. Much delayed, the minION launched commercially in September and has the ability to sequence up to 80,000 base letters long, giving it the longest read lengths in the market. Its accuracy is a subpar 65-80%. In response, Oxford Nanopore encourages redundant testing, which is feasible because it can sequence up to 150 million bases in just six hours.

Many people think of DNA sequencing as a technology that belongs only in research laboratories. In reality, it is a valuable tool in the fight against new and deadly potential epidemics.

Tags: DNA Sequencing, Genomics
See More
See all articles
You are leaving ark-invest.com
By clicking below you acknowledge that you are navigating away from ark-invest.com and will be connected to ark-funds.com ARK Investment Management LLC manages both web domains. Please take note of ARK’s privacy policy, terms of use, and disclosures that may vary between sites.
PROCEED