Automation has revolutionized the agricultural industry for centuries thanks to advancements such as the plow, tractor, GPS-controlled combine,  prescriptive planting technology, and now robots. As a result, yields have continued to improve while employment in the sector has declined dramatically. Over the years, many people have worried that the plow would replace their jobs in the field, and it certainly did.

In 1790 farmers represented 90% of the labor force, but this percentage has declined ever since. By 1840, in the midst of the Industrial Revolution, farmers made up 69% of the labor force, by 1920 only 27%, and by 1990 a measly 2.6%. Advancements in technology have enabled employees to work in occupations that require less manual labor, but command higher wages for contributions at more highly-skilled jobs.

Technology has replaced much of the manual labor required in agriculture. Milking robots save farmers money and keep cows healthy. Grape-harvesting robots and self-driving tractors are other examples in this sector. Similar disruptions are taking place in the Agriculture, Forestry, and Fishing and Hunting sector.

We estimate that by 2035, robots will replace 316,000, or 60%, of the 530,000 jobs in the sector at that time. The investment in automation will be enormous – on the order of $16.5 billion through 2035.  The resulting gains will also be incredible.  GDP generated by the agriculture sector in 2035 will be 55% greater with automation than without, as automation will add $63 billion to GDP by that time.  Similarly, output per worker will be 55% greater with automation than without. 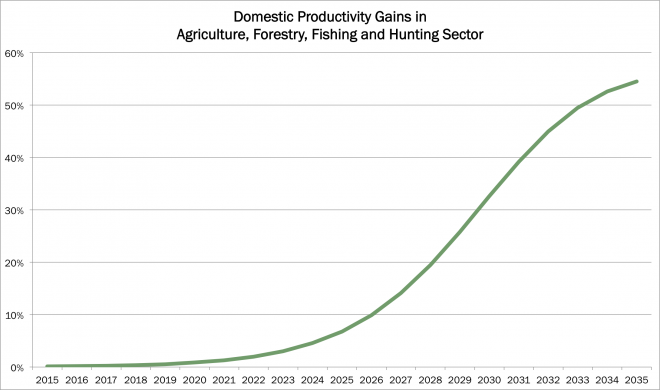 While these multi-billion dollar returns will be significant for the US economy, the impact of global agricultural automation will be profound. According to the World Bank, more than one billion people are employed in agriculture globally, roughly 2,500 times the size of the US market alone. During the next twenty to thirty years, robots could enable these workers to pursue more skill-based and higher paying jobs.

Tags: Artificial Intelligence, Blockchain, DNA Sequencing, Energy Storage, Good Deflation, Inflation, Macroeconomics, Robotics
See More
See all articles
You are leaving ark-invest.com
By clicking below you acknowledge that you are navigating away from ark-invest.com and will be connected to ark-funds.com ARK Investment Management LLC manages both web domains. Please take note of ARK’s privacy policy, terms of use, and disclosures that may vary between sites.
PROCEED