On some level, the argument for the adoption of solar has been simple: at some future date, declines in the cost of solar power will generate cheaper electrons than those from traditional power plants. For decades, this forecast of “grid parity” has supported the case for subsidizing a technology that has been around for decades but remains, in large part, uneconomic. ARK’s analysis suggests that even if the solar panels were to cost nothing, residential solar would not make economic sense given the high costs of customer acquisition, logistics, and panel installation. That said, Building Integrated PhotoVoltaics (BIPV) may have the potential to change this investment paradigm.

While the dramatic cost decline of solar panels has given analysts reason to forecast that grid parity is within reach, based on our research module prices already have dropped by so much that incremental declines will do little to effect the economics of solar. In the table below, ARK demonstrates that the cost of modules could drop to zero and yet an investment in residential solar still would be uneconomic.[1] 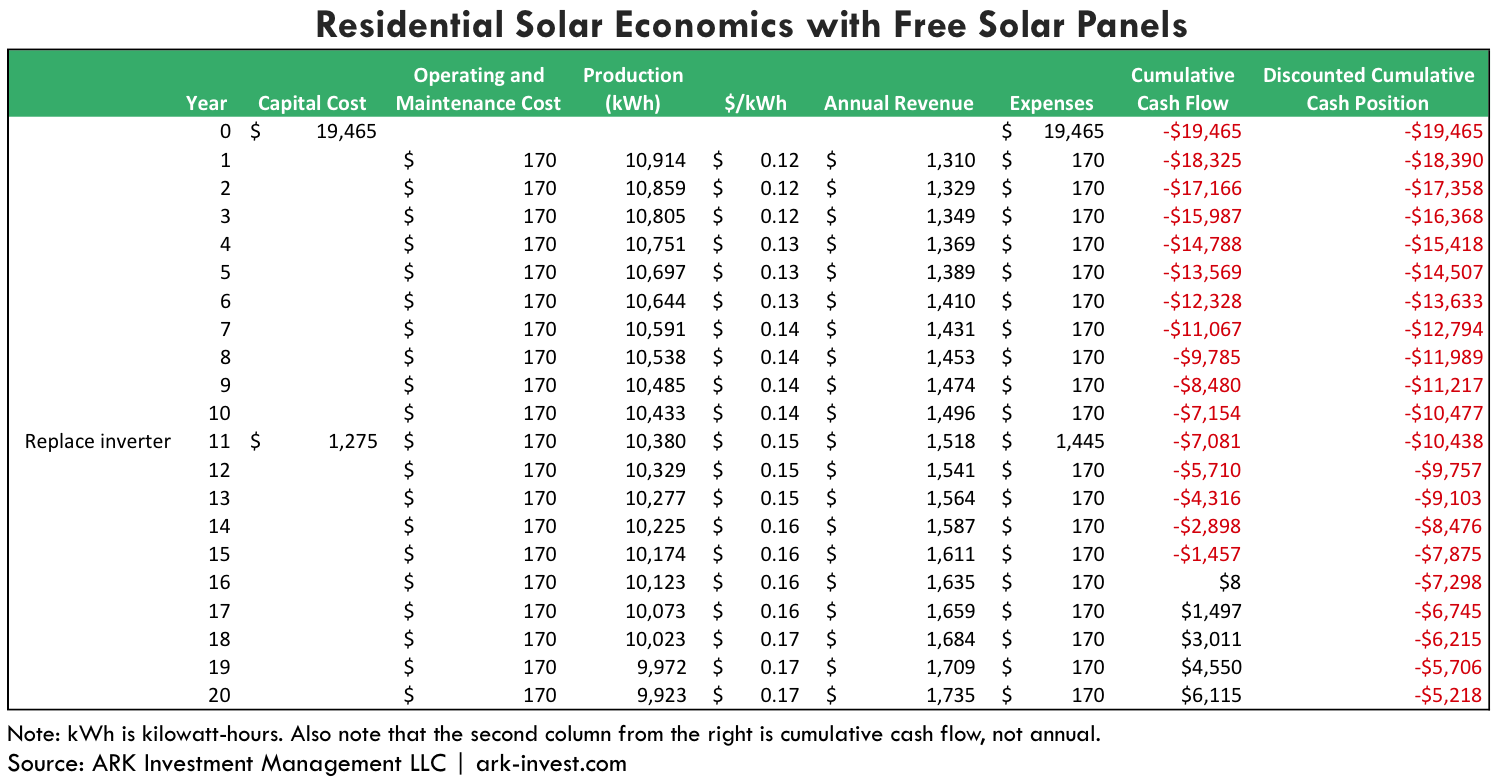 In the third quarter of 2016 SolarCity’s [SCTY] total cost per watt installed was $2.89, over four times the $0.60 spot price of mono crystalline silicon (c-Si) solar modules.[2][3] ARK’s analysis reveals that even with free solar panels and a total cost per watt installed of $2.29, the net present value [4] of an unsubsidized residential solar project would be roughly $5,000.[5][6] In our opinion, no amount of price decline for solar panels would matter: at $0, the project would not be worth the investment.

BIPVs have the potential to change the economics of a solar investment. Now under Elon Musk’s direct leadership, SolarCity soon will produce and sell a solar-integrated roof, targeting customers committed either to purchasing new homes or to rebuilding their roofs. We think homeowners should be able to finance the incremental solar hardware with mortgages, a much cheaper source of funding than SolarCity has been able to offer historically. SolarCity also should be able to improve sales efficiency by targeting builders like Toll Brothers instead of individual homeowners, reducing labor expense, particularly for installers.

BIPV is not a new concept. While on paper BIPVs have made economic sense for residential solar, historically execution has been an issue. Dow Chemical [DOW], for example, introduced Powerhouse solar shingles in the U.S. more than five years ago but announced recently that it was exiting the business, highlighting its inability to scale and maintain quality. Musk, however, seems to have some solutions, soon to be commercialized.

So, how might the solar roof math make economic sense? The cost to build or rebuild a typical roof is in the range of $5,000 and $12,000. According to ARK’s estimates, the solar roof’s hardware will cost more than that of a roof made up of solar modules, as will the associated operating and maintenance costs, particularly repairs, given the seamless integration required. That said, even if the solar roof were to cost $12,000 more than a typical roof, the lower electricity bills during its lifetime could offset the additional costs, as shown below. 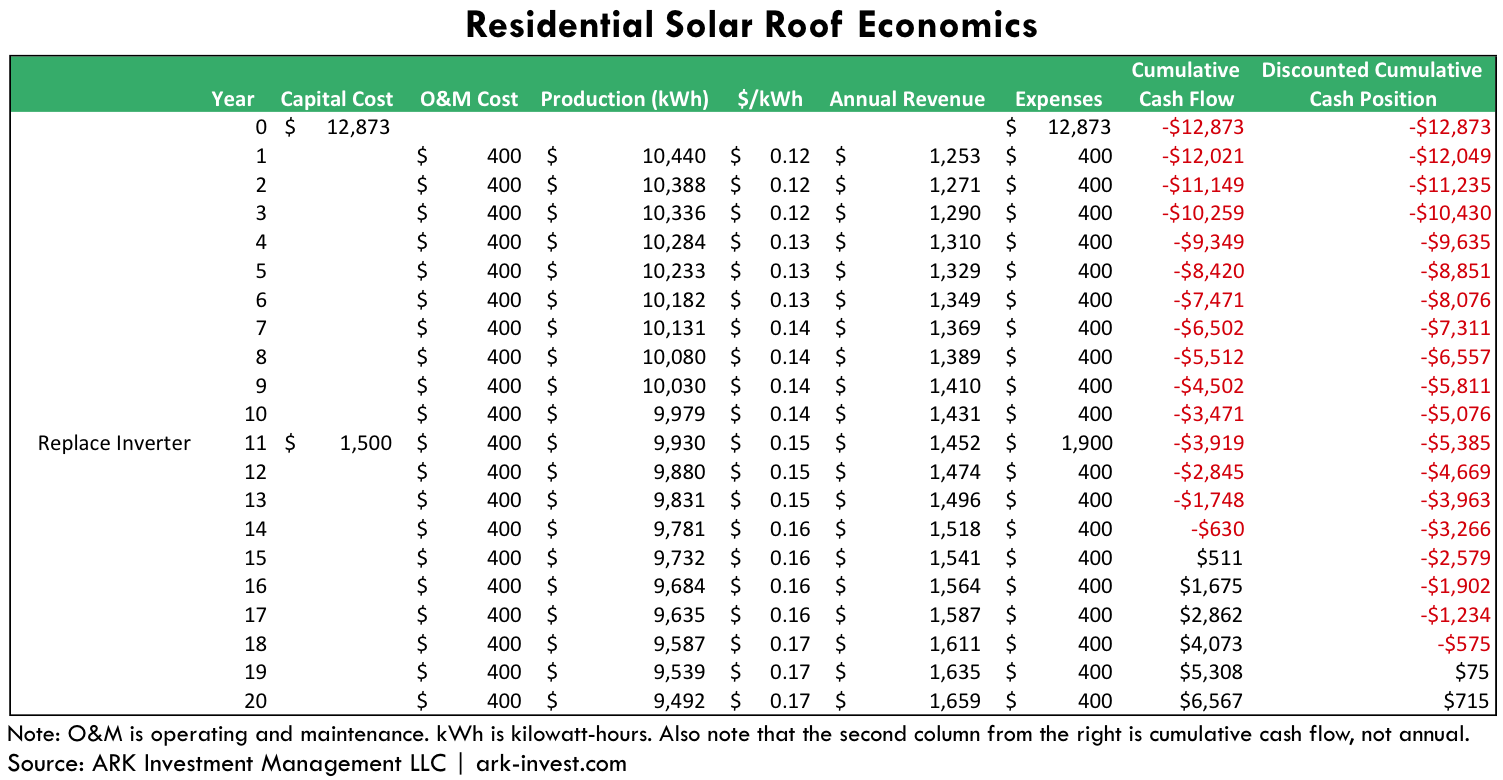 While installation and sales costs have killed the economics of traditional residential solar, the added hardware of a solar roof, as opposed to the combination of hardware and labor, might make economic sense for SolarCity. Given roughly 50,000 new homes sold in the US per month [7] and an estimated five million roof replacements per year,[8] the total market available to BIPV could be consequential. Moreover, by tying the marginal costs of the roof more directly to the price of its underlying solar modules, solar roofs actually might make residential grid parity a reality.[9]

Tags: Artificial Intelligence, Blockchain, DNA Sequencing, Energy Storage, Market Insights, Robotics
See More
See all articles
You are leaving ark-invest.com
By clicking below you acknowledge that you are navigating away from ark-invest.com and will be connected to ark-funds.com ARK Investment Management LLC manages both web domains. Please take note of ARK’s privacy policy, terms of use, and disclosures that may vary between sites.
PROCEED