Over the past ten years the pharmaceutical industry has spent over $500 billion dollars to produce only 227 new drugs, called New Molecular Entities (NMEs). In 2010 alone the pharmaceutical and biotechnology industries spent more on R&D than the Industrial Engineering, Aerospace & Defense, and the Software and Computer Services industries combined.[1] 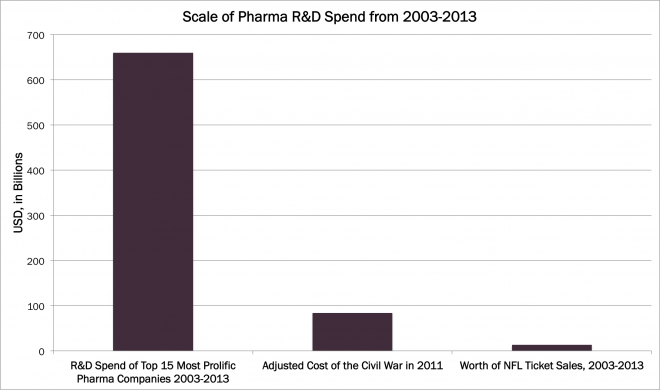 Yet, only three out of every twenty drugs—or about 15%—generate enough revenue to cover their development costs. Further, the projected cost of creating one successful NME is expected to exceed $5 billion by 2016. Clearly, this business model is not sustainable.

Consider that at the beginning of the traditional drug development process, pharmaceutical companies look at a pool of 5,000 to 10,000 compounds. By the time clinical trials begin, generally only five compounds are in contention. After a great deal of time, effort, and R&D spending, 90% of these remaining compounds will not get FDA approval. The need to spend hundreds of thousands of dollars screening numerous compounds may soon be a thing of the past, thanks to in-silico drug discovery. 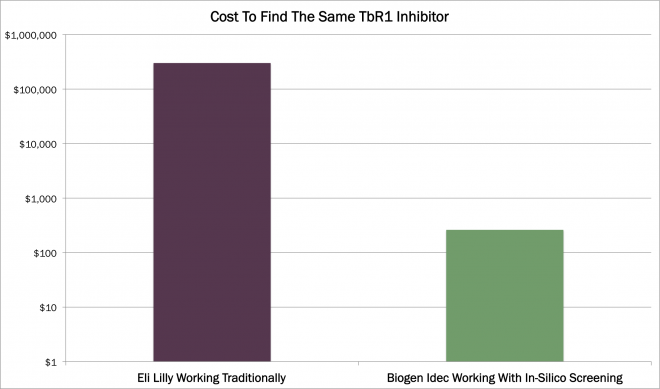 One key example, shown in the figure above, is the different ways by which Biogen Idec [BIIB] and Eli Lilly [LLY] discovered an inhibitor for the protein TbR1 [2], which is implicated in both Alzheimer’s and Parkinson’s disease. Biogen used computer models to identify 87 promising compounds that were then put through chemical testing. Lilly, on the other hand, went with enzyme-based assays from the outset. While Lilly spent less per assay – $1.50 rather than $3.00 – the sheer volume of compounds caused the company to spend $299,739 more than Biogen to find the same inhibitor.

In-silico technology has not yet reached wide adoption in the pharmaceutical industry. But, changes are coming. The potential for computational methods to save one of the world’s biggest industries tremendous amounts in R&D spending is just beginning to be unlocked.