ARK previously estimated that, given regulatory approval in the US, an Amazon drone could deliver a package in less than half an hour profitably today for $0.90, cutting the cost of domestic shipping by roughly 90%. Adjusting for our updated assumptions, particularly the efficiency of autonomous flight and the amount of human intervention, ARK now estimates that parcel drones could deliver packages profitably for only $0.25. Given frictionless and inexpensive delivery, consumers probably would buy many more goods online, growing ecommerce’s share of retail sales from 14% in 2019 to 60% in 2030, with drones delivering more than half of the ecommerce volumes, as shown below. 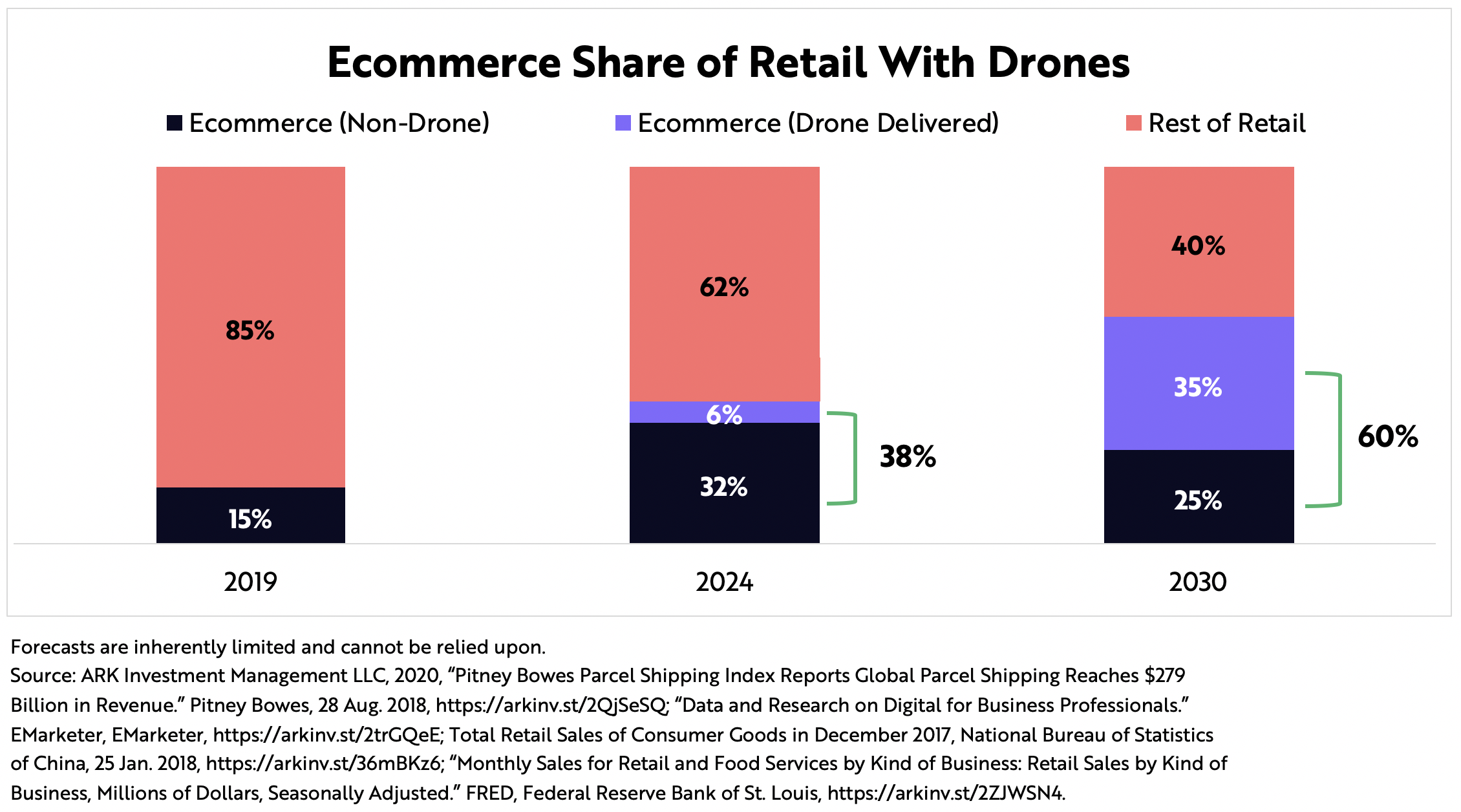 ARK expects inexpensive parcel drone delivery to change consumer shopping behavior. Promotions with free shipping tend to increase the size and number of orders. Indeed, with free two-day delivery, Prime customers spend twice as much on Amazon than do non-Prime customers. If drones could deliver packages in fewer than 30 minutes for less than $1, as we believe will be likely, the shift to online shopping would accelerate.

Pending regulatory approval, revenue from parcel drone delivery could total $113 billion by 2030, as shown below. At roughly $4 per parcel today, traditional delivery generates roughly $280 billion in revenues.[1] ARK believes that as drones cut shipping costs, delivery volumes will increase thanks both to rising ecommerce sales and to consumer preferences for quick, inexpensive shipping. Heavier packages probably will be split up into lighter loads to facilitate drone transport. While many companies like Alphabet, Rakuten, JD.com, and/or carriers like DHL and UPS should be beneficiaries, Amazon could take disproportionate share with free drone deliveries for both Prime subscribers and customers signing up for home drone surveillance services. 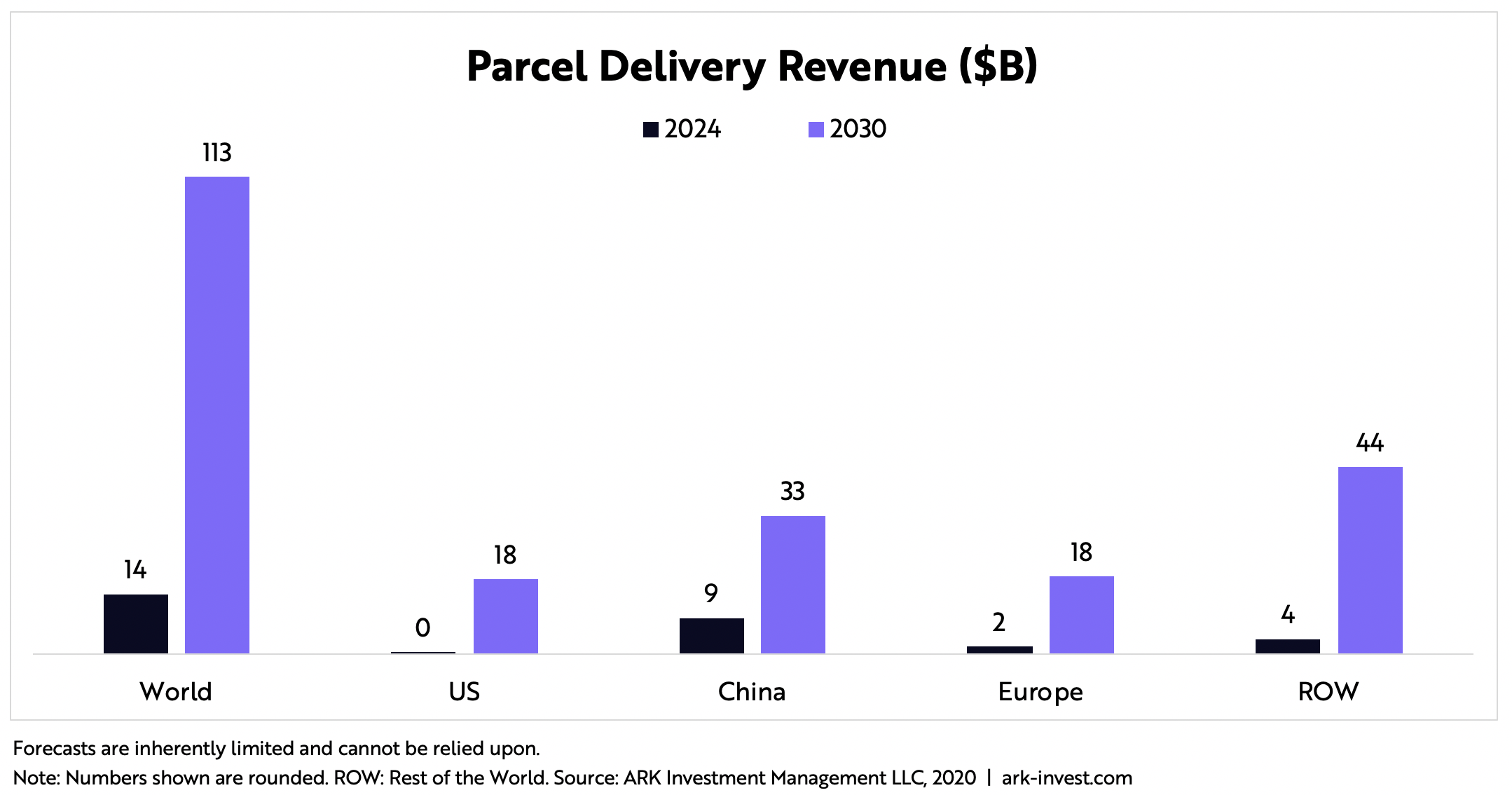 While autonomous cars fall under state regulations in the US, drones face more onerous federal regulations. In response, companies like Amazon and Google are testing drones in more friendly regulatory regimes like those in the UK, Canada, the Netherlands, and Australia. Chinese authorities have been even more friendly. JD.com, for example, has been testing drones for several years in more than 100 villages in rural China. In addition to safety considerations, companies experimenting with drones face regulatory concerns about noise pollution. That said, based on recent approvals, US regulators are making progress, perhaps out of fear of being left behind technologically.

Other beneficiaries of the shift to drone delivery services should be mapping providers and drone hardware providers. Third party companies like Airmap are partnering with regulatory authorities to offer digital infrastructure and traffic management services to drone delivery service operators. Out of the $113 billion that ARK estimates for global drone delivery revenues in 2030, mapping providers could potentially garner 5%,[2] or $6 billion, as shown below, while the drone hardware market scales to $25 billion.[3] 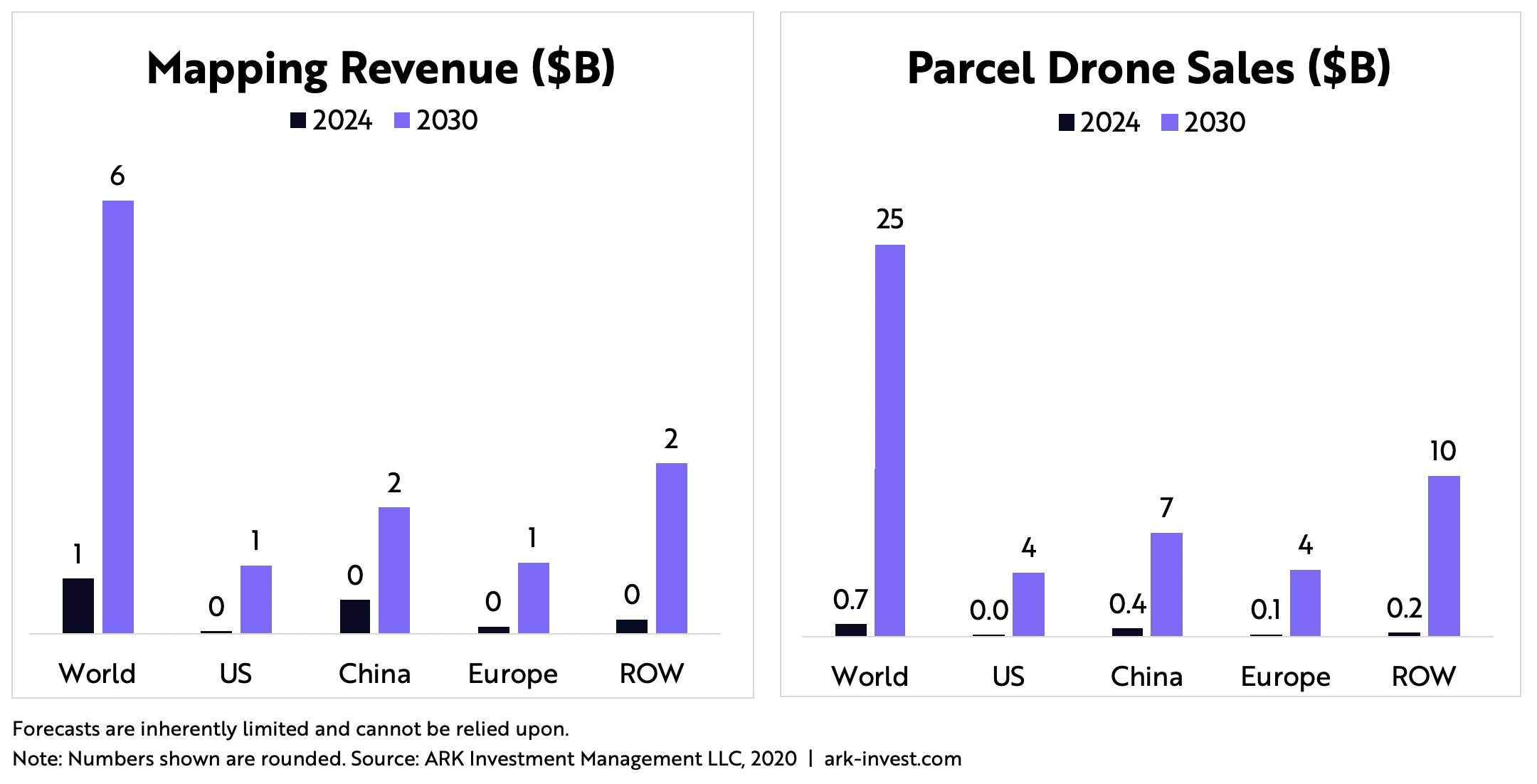 Finally, thanks to its convenience and cost effectiveness, drone delivery could expand total retail sales. Consumers probably will purchase goods online more often, perhaps multiple times a day, if they don’t have to leave their homes, exacerbating the struggles of shopping mall owners. Parcel drone delivery services probably will impact rural and suburban neighborhoods disproportionately, in contrast to autonomous taxi services, which ARK expects to be more successful in urban areas. While this analysis has focused on parcel delivery, autonomous food delivery also should be an excellent use case for drones. In other words, drone delivery could reshape shopping and eating experiences around the world completely. 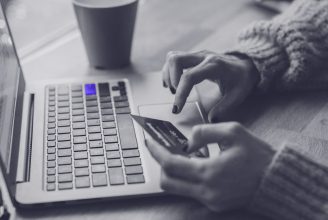