The International Data Corporation (IDC) projects the global public cloud computing market comprised of Infrastructure as a Service (IaaS), Platform as a Service (PaaS), and Software as a Service (SaaS), will be $127B in 2018, more than double $56.6B in 2014.[1][2] It is called the public cloud because through smart software, the same underlying hardware can provide utility to separate companies, referred to as multi-tenancy. This principle is very similar to that of tenants in an apartment building, where partitioning allows people to derive utility from the same chunk of physical resource without disrupting one another. In this way, the public cloud cuts costs through resource sharing, allowing companies to efficiently rent a variety of computing resources as a service.

SaaS delivers a no hassle, prepackaged solution through a web browser, outsourcing nearly all technological headaches. Not only is the software provided, and often customized to the company’s needs, but the underlying hardware necessary to run the software also is included in the service. Such a model is drastically different from on premise solutions, in which companies have to purchase and maintain expensive hardware, not to mention install and periodically update temperamental software. SaaS subscription fees are per seat and recurring, replacing the high cost capital outlay and large IT teams required for troubleshooting.

The benefit of an integrated platform is that a company’s data can reside in a single data lake, enabling previously elusive insights by breaking down data silos. For example, NetSuite’s full SaaS offering allows a member of a sales team to enter an order, automatically posting it to a warehouse for shipment, and to a financial ledger for billing. The process takes place on a single platform, integrating data that can flag problems in the pipeline. On premise solutions tend to be pieced together with fickle and latency-prone middleware.

While SaaS solutions are popular, many companies already have software solutions, but need to outsource processing power, extra storage, or more robust networking capabilities. IaaS provides that service. With IaaS, large companies own and manage monumental amounts of hardware, and rent it by the minute to meet spikes in demand, perhaps at year end or tax time. Intuit [INTU], for example, rents storage from Red Hat [RHT], and has dropped its costs of peak storage at tax time by a factor of 16.

Amazon [AMZN] is the clear leader in IaaS. In 2013, it provided five times the compute capacity of its 14 nearest competitors combined. Now, Microsoft [MSFT] and Google [GOOG] are in hot pursuit, while Rackspace [RAX], IBM [IBM], HP [HPQ], Cisco [CSCO] and many others are providing niche solutions. Competition in the IaaS space hit a fever pitch during 2014 as Amazon, Google and Microsoft engaged in a dramatic price war. IaaS could become a ‘race to zero’; effectively free, with providers dependent upon ancillary features, functionality, and services.

PaaS simplifies and expedites application development, deployment, and maintenance on an array of operating systems and devices. Targeted at software developers, PaaS provides building blocks that take applications from concept to reality rapidly, often by supporting an array of programming languages. Unlike SaaS, which provides apps for internal operations, PaaS offers tools to build a company’s customer interface. Thanks to Salesforce’s [CRM] PaaS, Salesforce1, companies are launching 80% more apps per year with a 70% accelerated time to market and a 75-85% reduction in infrastructure costs, resulting in a 520% return on investment.

PaaS reduces time to software-launch by integrating with IaaS. Ease of use and integration are key PaaS differentiators. Salesforce acquired and integrated PaaS provider Heroku onto its Salesforce1 platform, and RedHat did the same for OpenShift on its Red Hat Enterprise Linux platform.

Clearly, PaaS commands higher margins than the price competitive IaaS, while SaaS solutions enjoy gross margins around 80%. In 2010, UBS [UBS] estimated that Amazon Web Services 2014 gross margins would be in the low 50% range, while PaaS margins are somewhere in between the two. Conversely, according to IDC, IaaS should experience the most rapid growth among the three at 30% annually, while PaaS and SaaS lag at 26% and 20% respectively, as shown below.[3] 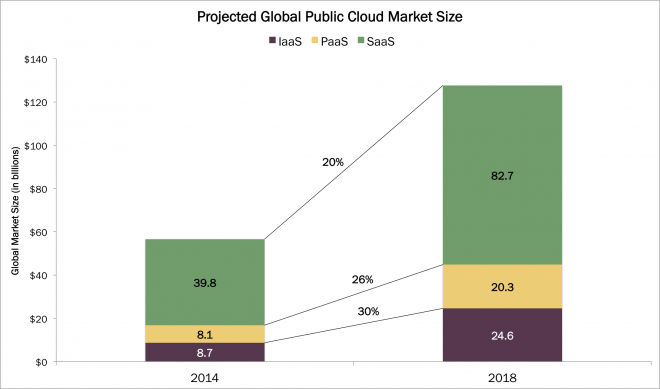 Billions of dollars of platform related decisions will be made as the cloud evolves during the next few years. Traditional enterprise software companies face a cloudy outlook.