How Streaming Could Create a $50 Billion Music Industry

“I know of only two ways to make money—bundling and unbundling.”

Few industries have felt the disruptive power of the internet like the music business. Global music revenue targeting the consumer market dropped from $24 billion in 1999 to $13B in 2016, a 63% drop when adjusted for inflation, according to the IFPI.

The collapse in music seems to be history now. In 2016, the industry returned to growth, powered by a new business model—streaming. In our view, streaming is the “new bundle”, improving both the value proposition for listeners and the revenue potential for the music business. Indeed, during the next five years, the streaming music market could grow fivefold, to $50 billion.

The music industry has gone through three transitions: physical albums, downloads, and streaming. In each, a technological breakthrough created a new listening format and a new business model defined by bundling or unbundling.

The album was the original bundle, thanks to the creation of LP vinyl records. With play time extended from 10 minutes to 45 minutes, musicians could create and sell songs by the bundle instead of individually. Although the format changed in subsequent decades, first to cassette and then to CDs, the economics remained the same, and at $15 per album the record industry hit a record $24 billion in revenues in 1999. 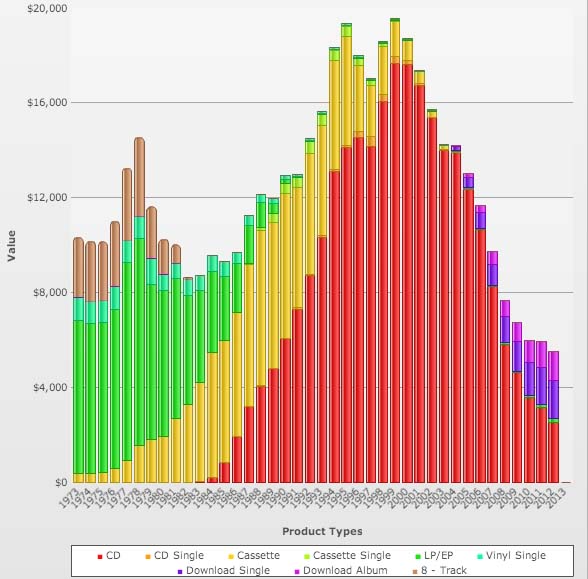 At that point, however, the internet changed everything: distribution was instantaneous and free, iTunes replaced the record store, YouTube [GOOG] displaced MTV [VIAB], and music piracy reduced the perceived cost of music to zero.  The album and its model were all but doomed. Consumers began to buy a la carte, one or two digital songs per album, for a few dollars instead of by the bundle for $15. From 90% of music sales in the late nineties, albums dropped below 50%, as shown above. Revenue collapsed as a result— today, the recorded music business in the US is about a third of what it was during its peak in the nineties.

While the internet unbundled the music business, it has reversed course and is in the process of creating a bigger and better bundle. Streaming subscriptions bundle almost all of the music ever created, more than 40 million songs, for roughly $10 per month.

Unlike the album bundle, the streaming bundle is a win-win for both the consumer and the music industry. For less than the cost of one album per month, consumers can listen to almost all music ever recorded on-demand, and the music industry has been able to substitute a fickle, hit-driven business with a recurring revenue model. Consumers love the new bundle, as more than 150 million people now subscribe and, as shown below, they have sent streaming music revenues soaring for the five years ended 2016. 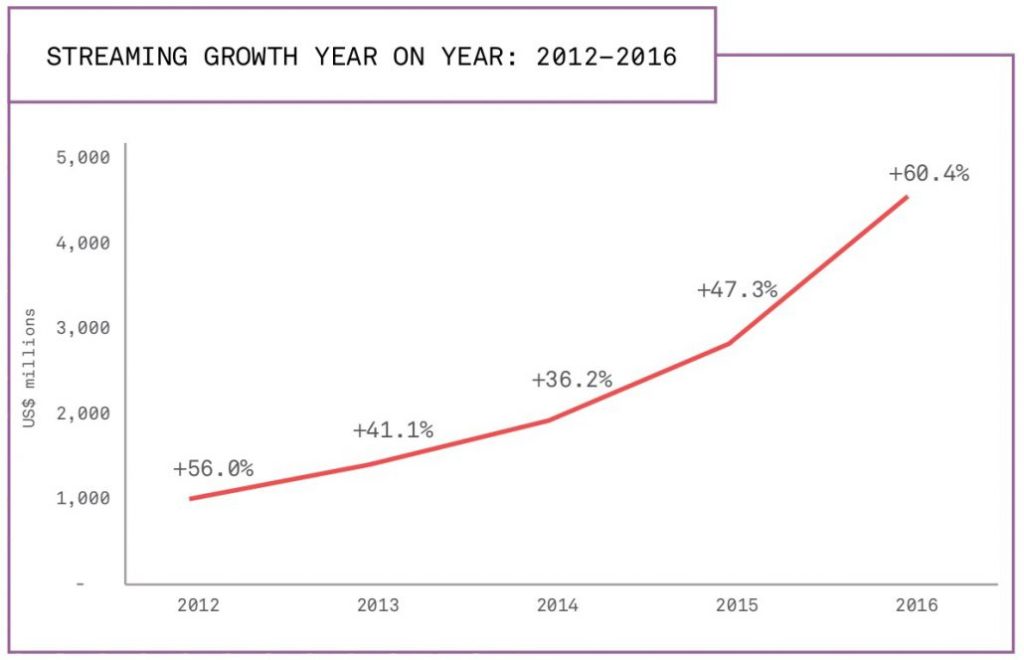 Beyond providing an economically attractive bundle for the music industry, streaming subscriptions could expand the music industry’s total addressable market (TAM) dramatically. Streaming music’s TAM will be dependent not on the number of record stores or PCs, but on the three billion smartphones users, increasing to more than five billion around the world during the next five years, based on ARK estimates. Penetration of just 16% would deliver nearly 800 million subscribers and $50 billion in revenue, as shown below.

At full maturity, streaming penetration should be much higher than the mid-teens. Cultural norms have evolved so that now music plays a much larger role in day to day living than has been the case historically. Knowledge workers, for example, work while listening to music, something that would not have been acceptable even a decade ago. As a result, music is gaining more share of the consumers time than other forms of entertainment like video.

In the US, 40% of millennials already pay for a streaming music service, suggesting that most people will be subscribers over time. As listening hours grow, streaming services should gain pricing power. According to ARK estimates, if 50% of smartphone users were to subscribe to a music service costing $8 per month, music industry revenues would scale more than 15-fold to $300B. 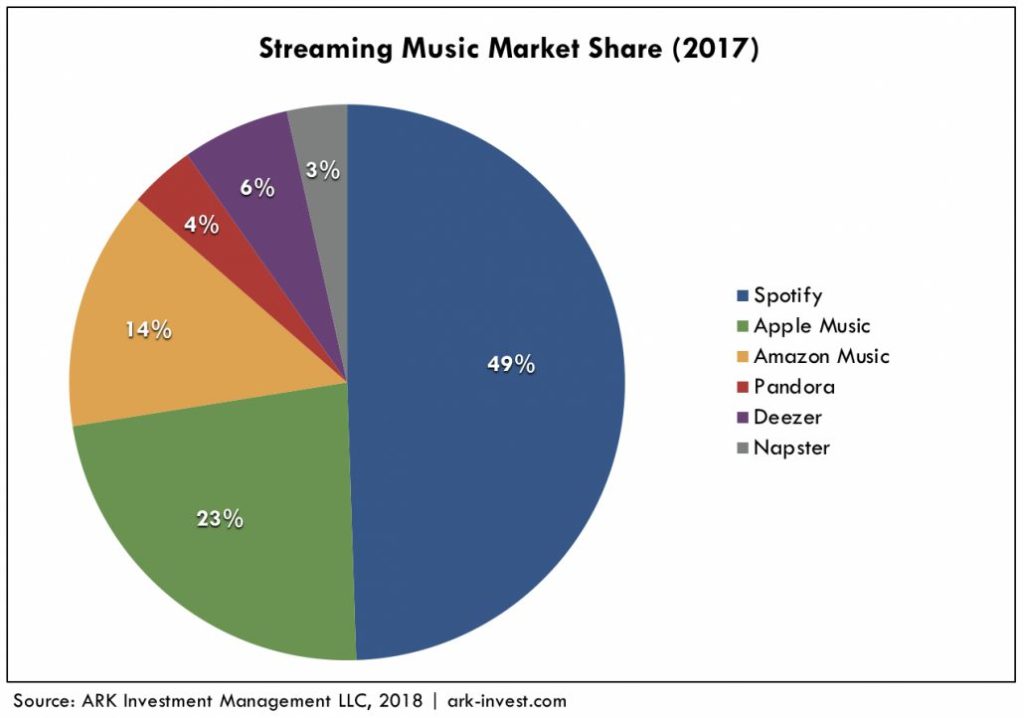 That said, given their platform and distribution advantages, the question is whether or not Apple and Amazon, or perhaps Google, will be able to trip up Spotify. Unlike Netflix [NFLX], Spotify has no original content and is at the mercy of three major music labels. For distribution, Spotify relies on its competitors, Apple and Google, who control the global smartphone market and who steer their users by default to their own streaming music services. With little leverage over its suppliers and a somewhat adversarial relationship with its distributors, Spotify appears to be stuck between a rock and a hard place.

What Spotify has going for it, however, is focus, platform neutrality, influential playlists, and a growing set of tools for artists. Music is one among dozens of ‘strategic initiatives’ for its competitors, while it is the only reason that Spotify exists: it has no choice but to out-innovate and out-execute the competition. Spotify is the only music service that works seamlessly across all smartphones, PCs, TVs, and cars, another significant advantage. Its curated playlists have become popular and influential, with “Rap Caviar,” “Rock This,” and “Viva Latino” garnering millions of followers and reaching more listeners than the most popular terrestrial radio stations. Lastly, Spotify has launched a set of tools called “Spotify for Artists”. The app provides artists with details important to their businesses, such as listener demographics and listening rates as they plan tour locations and set lists. More than 100,000 artists are using the app today.

Spotify’s primary leverage is in its ability to influence listenership. Already a third of total music streams originate from Spotify’s playlists, giving Spotify the ability to make or break artists through selective promotion. Spotify may seem or sound like a ‘dumb pipe’, but it is beginning to play the roles that radio stations, distributors, and concert promoters did in the old model. If successful in capitalizing on these roles, Spotify should be able to command gross margins greater than the 30% typical of distributors.

The internet gives, and it takes away. For the music industry, it took away, first through piracy then through unbundling the album. Now it seems ready to give. Streaming as a technology and subscription as a business model are transforming the total available market for recorded music, setting it up for at least a decade of sustained growth. We expect music streaming revenue to grow at a compounded rate of 30% per year, from $10 billion in 2017 to $50 billion by 2023.  And over the long run, as smartphones reach every pocket and music becomes the soundtrack to our lives, we believe it could grow into a $300 billion industry.