As of the end of 2014, almost three billion people had internet access, with 2.3 billion on mobile broadband subscriptions. By 2017, more than half of the world’s population, or 3.5 billion people, are expected to own a smartphone, swamping the one billion in fixed broadband connections projected in the 2014 Internet Society Global Internet Report.

Google [GOOG] is the leading online advertising platform, with more than 30% market share of total digital advertising, and 47% of mobile ad spending in 2014. Mobile contributed an estimated 27% to Google’s total ad revenues in 2014. According to eMarketer estimates, the mobile display market grew 87% year-over-year in 2014, compared to only 3% growth in the desktop display market. While seemingly a benefit to Google, the shift to mobile actually could put it at risk.

On the desktop Google’s core search links potential consumers to a company’s goods or services. Consumers find it easier to search for retailers instead of remembering and typing web addresses. Google’s desktop search platform is powerful, simple, efficient, and effective.

By contrast, on a wireless device Google’s mobile search platform is often not the preferred option. Apps are more powerful, simple, and efficient than typing. A mobile user with purchase intent can cut Google out of the value-chain altogether by not searching, going instead to Amazon [AMZN], The Gap [GPS], or eBay [EBAY] apps.

Facebook [FB] in particular is benefiting from the transition from desktop to mobile. In 2012, it accounted for just 5.4% of the global advertising market. By year-end 2014, it was expected to increase to 22% market share.

When mobile users do search, Google may not be the default engine. Apple’s [AAPL] Siri directs its users through Microsoft’s [MSFT] Bing, and the default search on the iPhone’s mobile browser—a slot held by Google since the iPhone’s 2007 launch—is up for renewal this year.

Google seems to be playing from behind in other mobile areas as well. Facebook seems to be doing a better job tracking users across devices thanks to its access to user identities, and is investing heavily in mobile advertising solutions, such as the Atlas platform which it purchased from Microsoft in 2013. Facebook has become a fierce competitor. During the past two years, its share of global mobile internet ad revenue has soared from 5% to 22%, while Google’s has declined from 53% to 47%, as shown below. 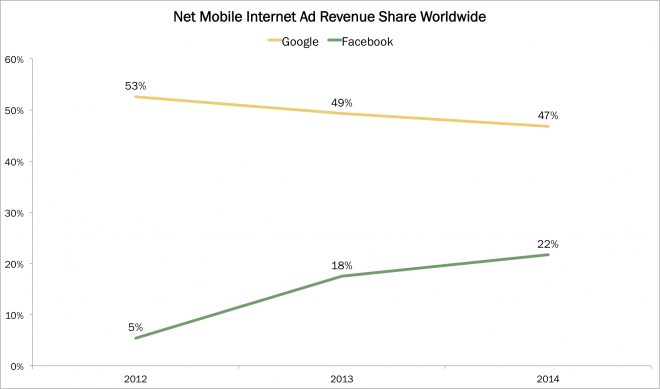 With the number of mobile broadband subscriptions further increasing, Google has several competitive weapons in its arsenal to fight back. Its mobile operating system, Android, powers almost 82% of the smartphones in the world, up from almost 79% in 2013. By comparison Apple iOS’ share has stabilized at roughly 15%. Consequently, Google has access to widespread distribution but must find more creative ways to monetize it. YouTube, the second largest driver of mobile traffic, gives Google an opportunity to take advantage of the mobile video ad market. Its recently announced partnership with Twitter [TWTR] also could attract advertisers to Google and eyeballs to Twitter.