At Amazon [AMZN], more than 15,000 Kiva robots work alongside employees on distribution center floors. At Lowe’s [LOW], robots guide customers to desired products. But why is the surge in robots taking place now? Key among the reasons is robots’ improved ability to sense and navigate through unfamiliar and changing environments. Particularly noteworthy are advances in machine vision systems, the generation of useful information from a camera-feed. Combined with the falling costs of cameras, lasers, sonar, and other sensors, sophisticated algorithms are sharpening machine vision.

In 2014, global investment in machine vision systems totaled almost $16 billion, and if the US is any guide, it is poised to increase more than ten-fold during the next fifteen years. As shown below, if machine vision continues to represent 5% of the total investment in robotics systems, global sales could approach $30 billion by 2020, and surpass $210 billion by 2030,[1] compounding at an annual rate of 18% during the next fifteen years. The unit growth in machine vision systems could be even higher, given the deflation associated with new technologies. 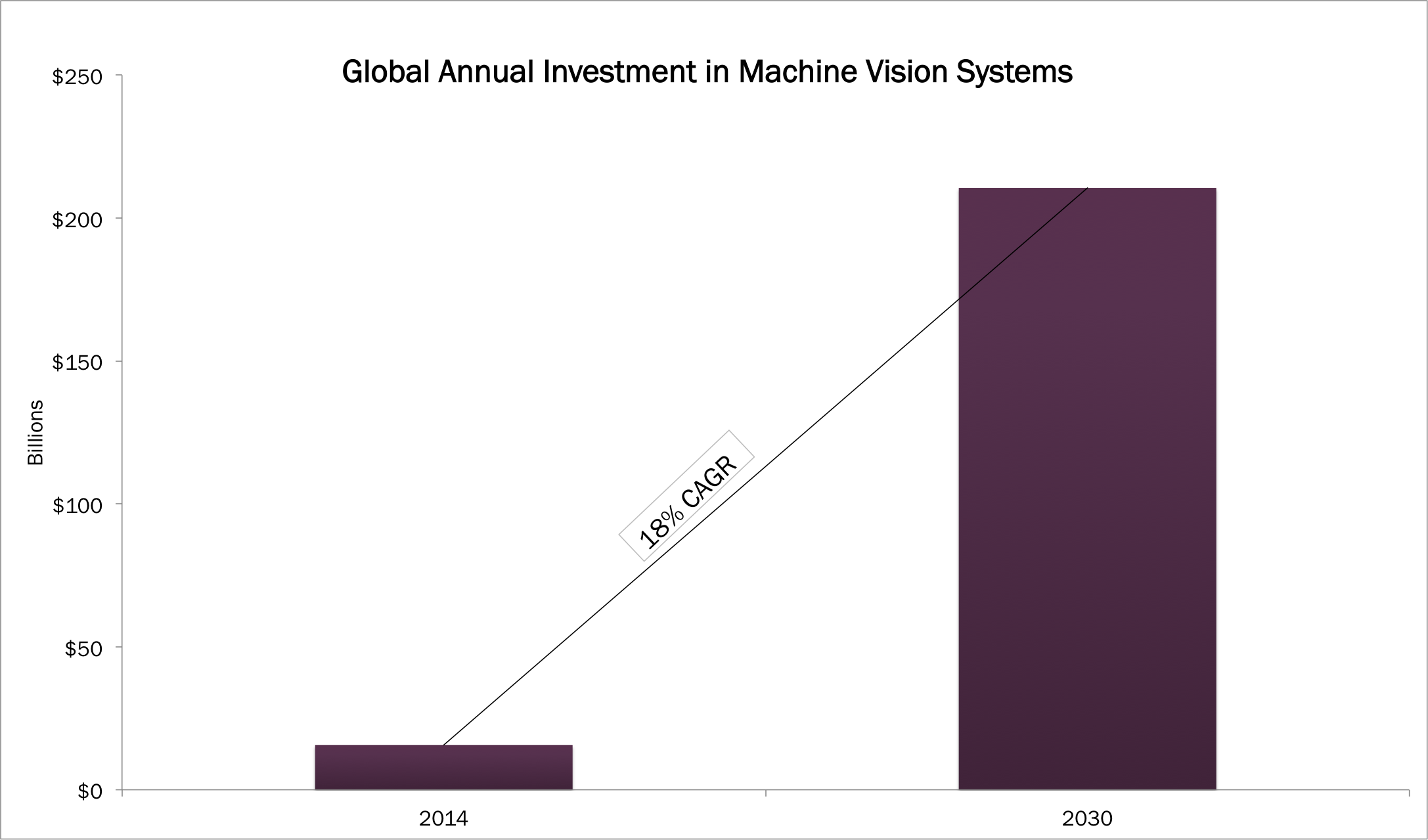 Among machine vision manufacturers, Cognex [CGNX] is well positioned to benefit from this rapid growth. Cognex manufactures sensors, components, and software for machine vision systems. Ambarella [AMBA] and Mobileye [MBLY] also should benefit, producing advanced video and image processing chips and cameras, respectively. In addition, Ambarella and Mobileye should benefit as machine vision moves into autos, wearable devices, and unmanned aerial vehicles (UAVs). All of these companies also will become part of mobile robot ecosystems, such as those at iRobot [IRBT] and Adept Technology [ADEP], as well as Microsoft’s [MSFT] Kinect sensor suite and Intel’s [INTC] RealSense.

Thanks to advances in machine vision, robots will be able to make sense of and maneuver around unfamiliar and dynamic environments. Machine vision will play a key role as robots permeate, infiltrate, and integrate into the new world.

Tags: Food Delivery, Robotics
See More
See all articles
You are leaving ark-invest.com
By clicking below you acknowledge that you are navigating away from ark-invest.com and will be connected to ark-funds.com ARK Investment Management LLC manages both web domains. Please take note of ARK’s privacy policy, terms of use, and disclosures that may vary between sites.
PROCEED