Will Tesla’s [TSLA] devotion to last decade’s battery system technology undermine its competitive advantage over the latter half of this decade?

On further reflection: No!

While a simple analysis of the relative price declines of the two major battery form-factors—cylindrical and pouch—would suggest that the likes of General Motors [GM] and BMW [BMW.DE] will produce electric vehicles (EVs) that compare favorably with Tesla’s within the next few years, we think a more complete accounting of the performance characteristics of the battery systems reveals that the competitive crossover-point won’t occur until the early 2020s. In short, Tesla’s lithium-ion cylindrical battery system loses less electricity and contains more energy per unit mass compared to the competition’s lithium-ion pouch battery system – a competitive edge that ARK believes will last into the 2020s.

Tesla dominates the EV market today, thanks in part to its lower cost technology. As shown below, the Model S would have cost twice as much had it been produced with pouch cells instead of cylindrical cells. The earliest Tesla EV, the Roadster, would have cost even more. 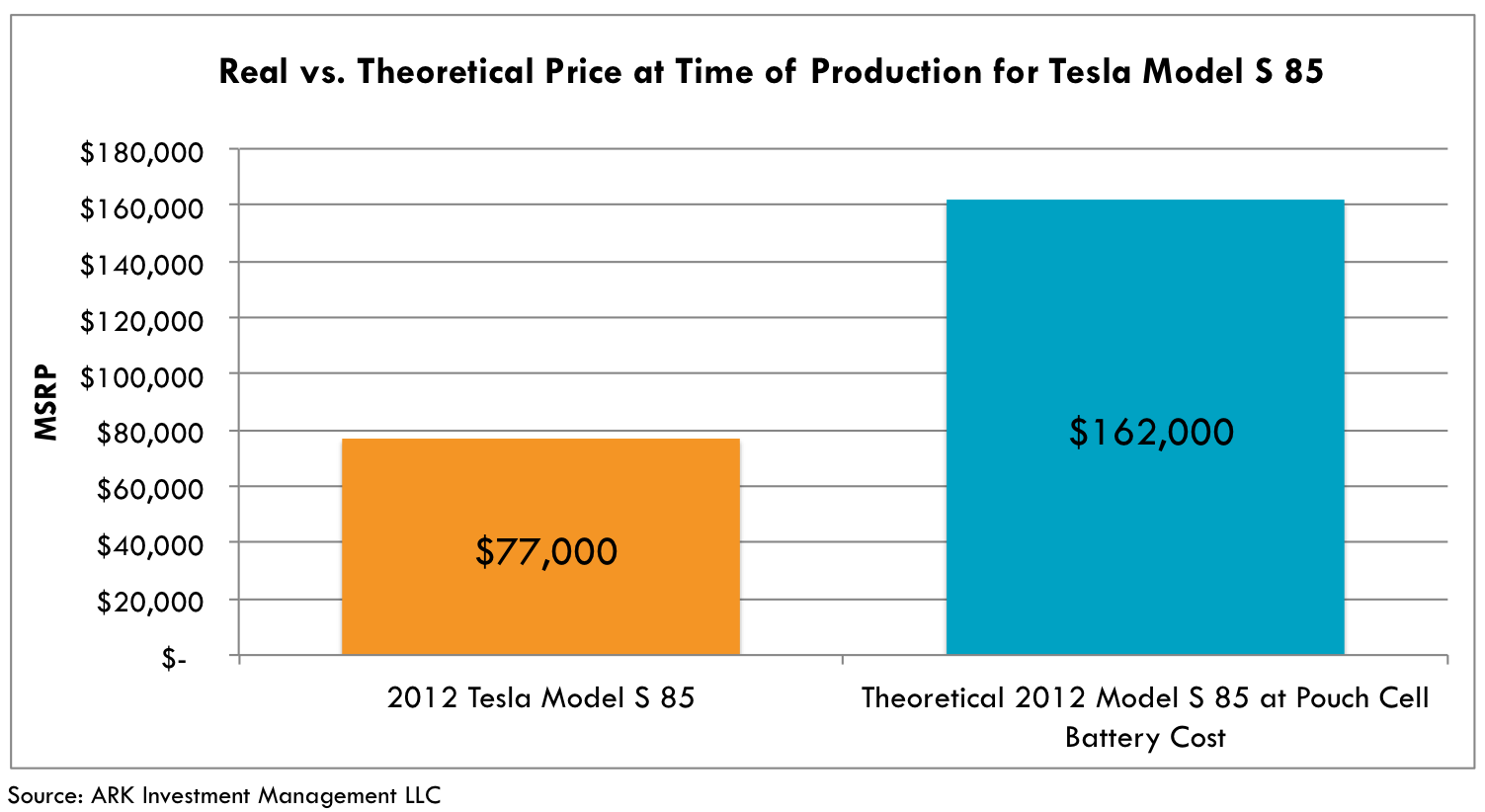 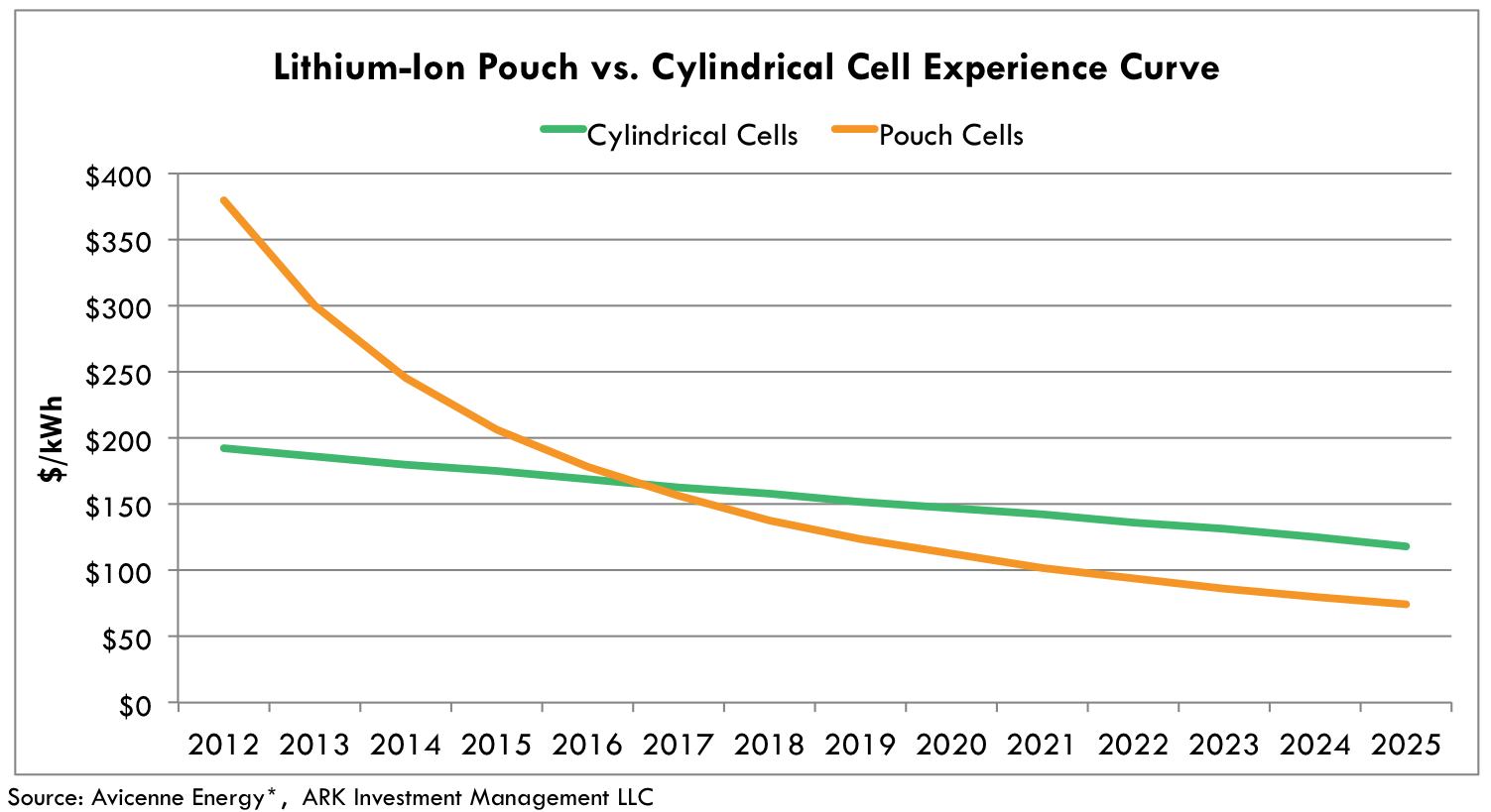 As seen below, cylindrical cells have roughly 50% higher specific energy compared to pouch cells. Specific energy is particularly relevant for EV applications compared to consumer electronics because extra weight reduces range. Batteries with higher specific energy will use fewer kWh to achieve a given range, therefor lowering the cost of a trip. Moreover, when added to the anode, silicon can increase the specific energy of a lithium-ion battery. Last year with the introduction of the 90 kWh battery pack, Musk said, “It’s a baby step in the direction of using silicon in the anode.” 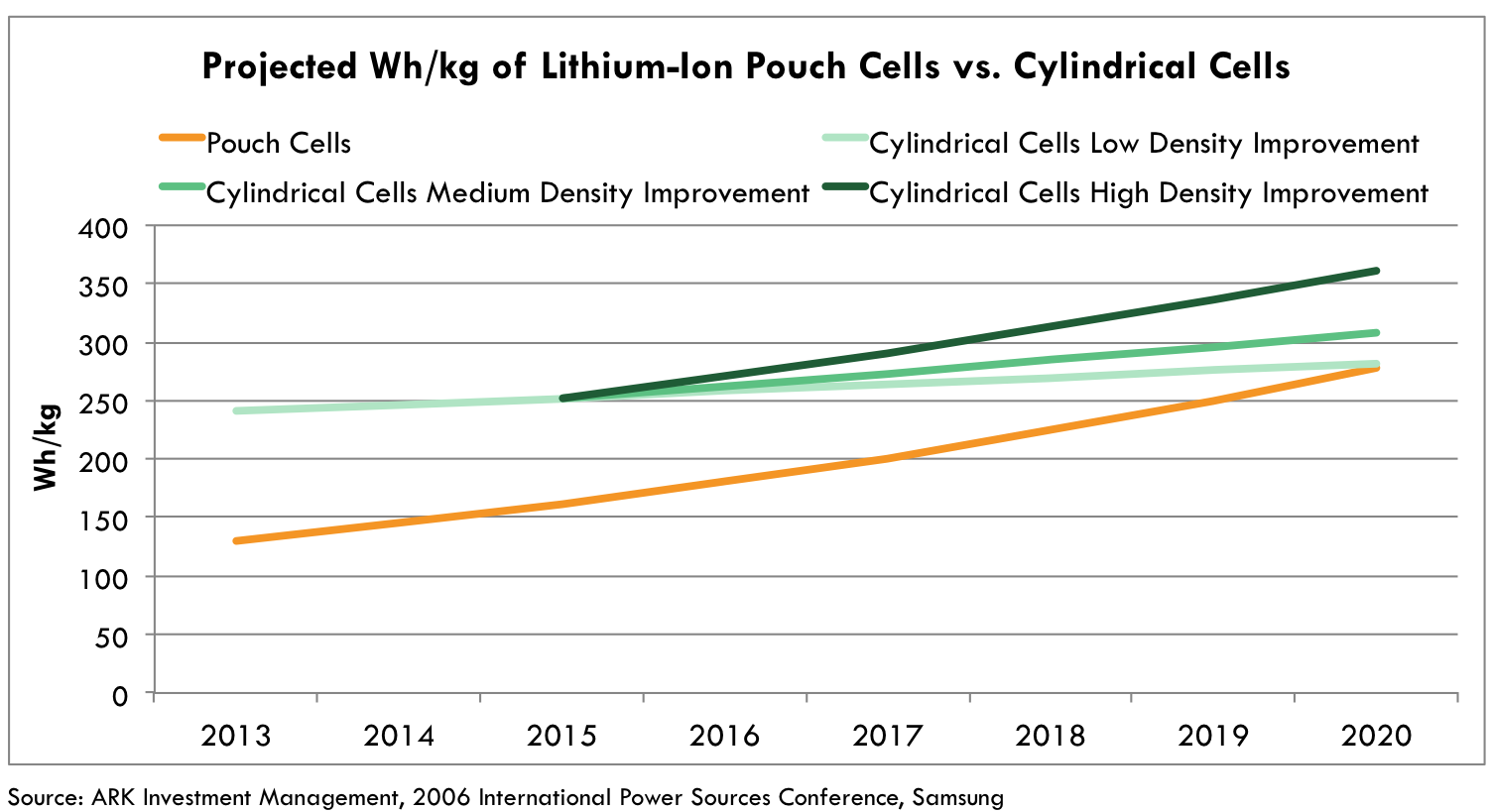 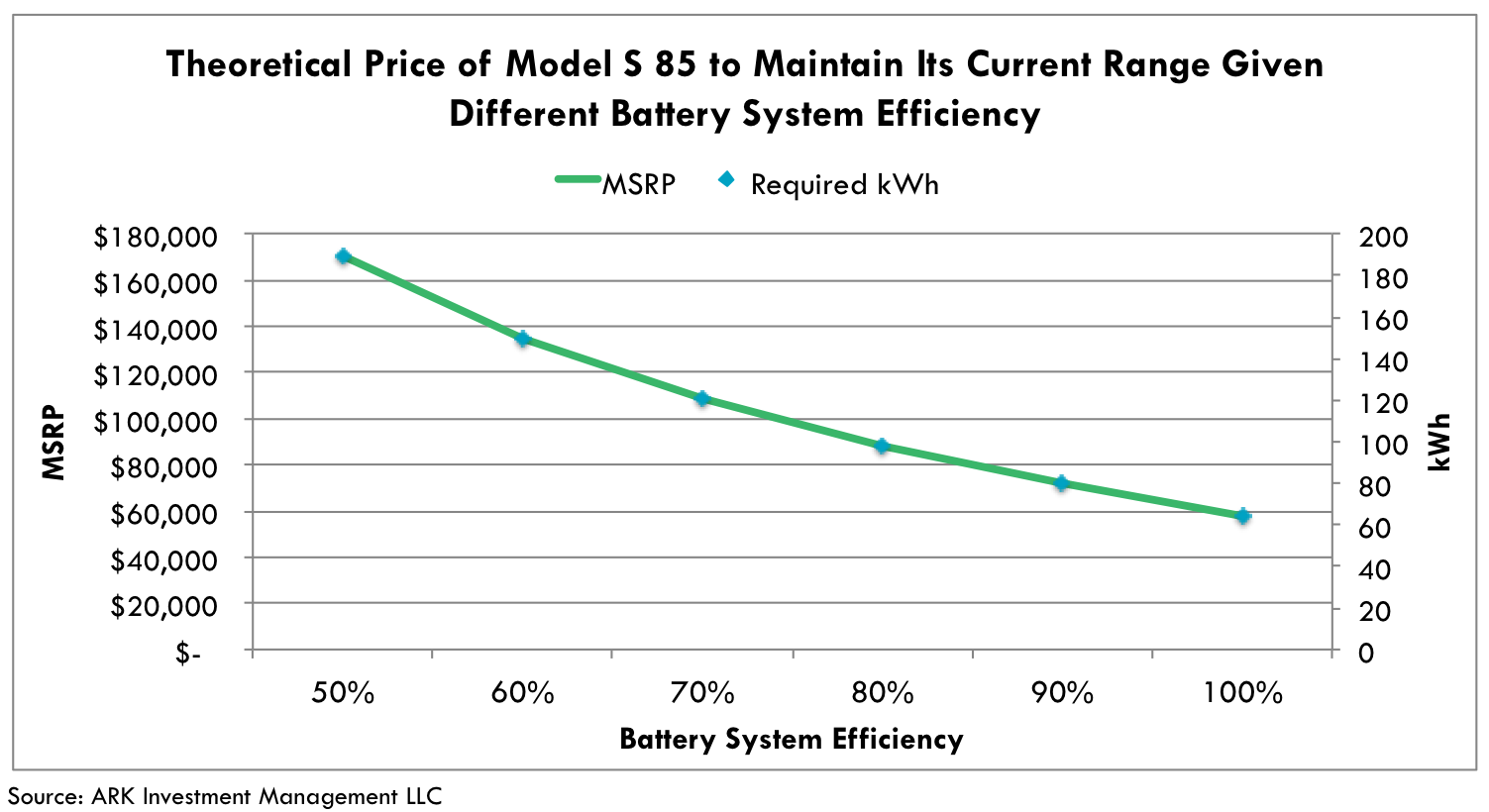 Taking all three battery characteristics (price, specific energy, system efficiency) into account, cost per kilowatt hour, specific energy, and battery system efficiency, ARK estimates that the cost crossover point between a 200-mile range EV using pouch cells and one using cylindrical cells will occur in the early 2020s. Consequently, all other things equal, we think Tesla will enjoy a five-year completive advantage before the competing battery technology catches up, as shown below. 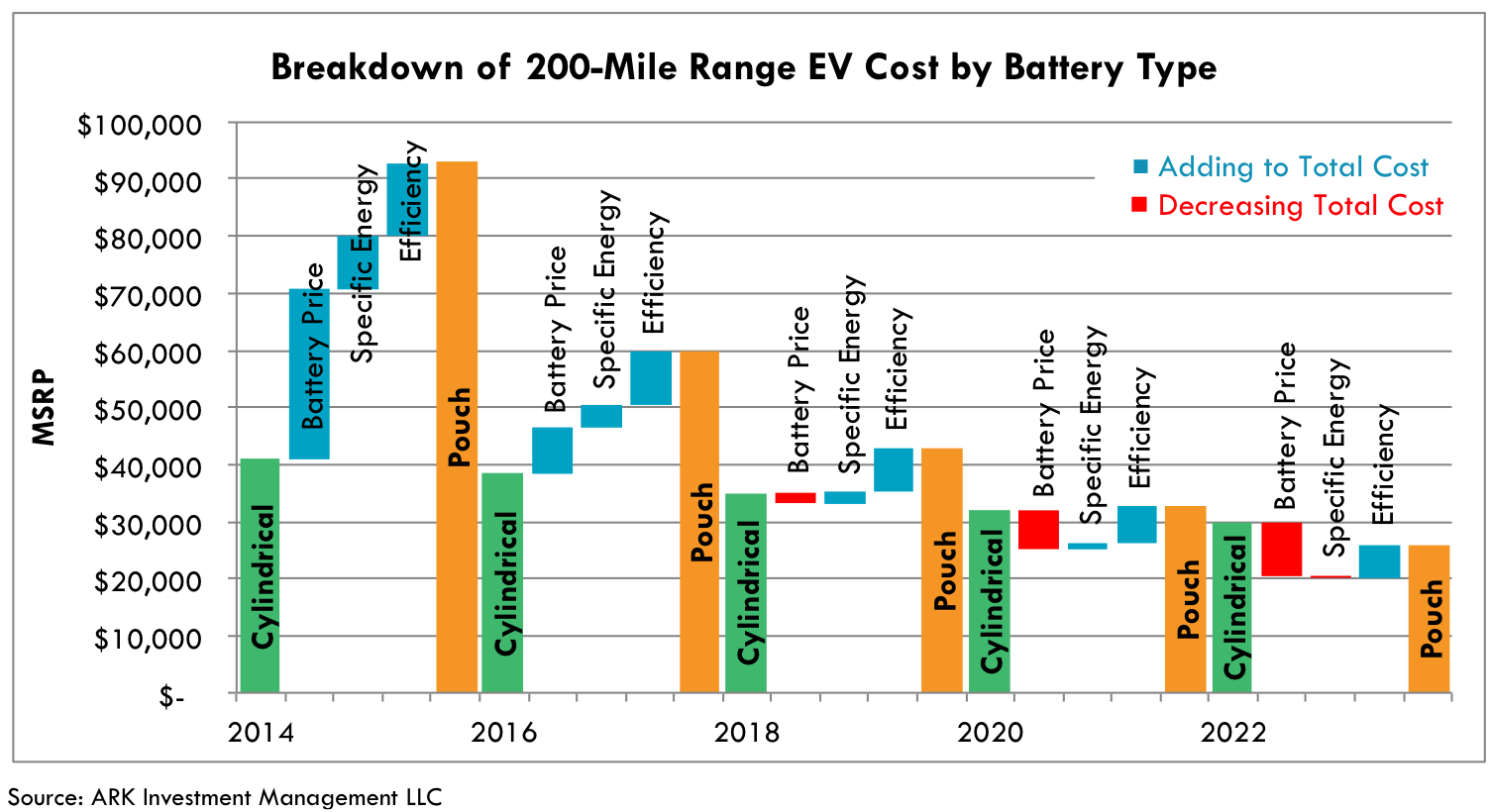 Of course, Tesla will use a larger format cylindrical cell in future cars,and competing car manufacturers will improve battery system efficiency over time. Because the battery and electric drivetrain make up roughly 20% of the total cost of an EV, ARK believes that Tesla should be able to offer either cheaper EVs or EVs with improved features and functionality at the same price as competitors. By 2020, an important differentiator will likely be autonomous features and functionality, an area in which Tesla is currently leading the pack.