Conventional guidelines for monitoring the recurrence of cancer involve routine physical exams and medical imaging. Recurrent tumors often are aggressive, especially if they appear in locations different from those in the original diagnoses. Yet, while PET and CT scans can surface important information about existing tumors, they rarely detect emerging tumors which, with time, can quickly become intractable.

Currently, liquid biopsies are powered by next-generation DNA sequencing (NGS) technology. They target a narrow range of mutations associated with cancer and search thousands of DNA fragments circulating in the bloodstream to identify tumor-derived DNA fragments (ctDNA). Because only trace amounts of ctDNA are present in the blood, detecting cancer recurrence requires exhaustive, ultradeep sequencing. The sequencing intensity and the cost of an LB depend importantly upon the number of mutations. By tracking the number of mutations as well as changes in sequencing depth and costs, ARK has developed a model of the market adoption of LBs for the monitoring of cancer recurrence.

LBs should target an increasing number of regions over the next five years. Although all well-known cancer driving genes impact just 2% of the human genome, LBs today focus only on subsets correlated to a particular cancer indication. These regions are further restricted to Tier 1 mutations that are highly clinically validated. Currently, researchers are focused on discovering and classifying lesser known variants, hoping to expand the number of Tier 1 mutations. While many newly classified mutations could be included in future LB target regions, they are likely to remain indication-specific. When a patient relapses, the recurrent tumor usually shares the same mutations as the original tumor even if it appears in a different location, suggesting that the original cancer cells were not fully eradicated. As a result, the target regions of future tests should be tuned to the same cancer driving genes as the original subpopulation of tumor cells. LB target regions are therefore poised to include a growing list of indication-specific Tier 1 mutations.

Despite ongoing improvements in next generation sequencing (NGS), the sequencing depth required to analyze ctDNA probably will remain high. Detecting tumor recurrence is complicated not only by healthy DNA but also by a process called clonal hematopoiesis (CH). CH leads to unrelated mutations in blood cells that obscure cancer signals, a problem that researchers are addressing with clever tools. More efficient target enrichment enzymes, for example, can amplify ctDNA for easier detection, and error correction algorithms can suppress background noise.

The clinical adoption of LBs for monitoring cancer recurrence may increase as their accuracy improves and their costs decline relative to conventional tests. NGS-powered diagnostic tools should be able to detect recurring tumors earlier and more reliably than most contemporary methods. While sequencing cost declines will be a tailwind for LBs, their adoption will depend on the depth of the sequencing and the sensitivity of various target regions, as shown below for lung cancer. Despite their expanding intensities, LBs for lung cancer may become cheaper than both CT scans and bronchoscopies within the next five years. Meanwhile, these LBs are also positioned to detect cancer earlier, less-invasively, and with more accuracy. 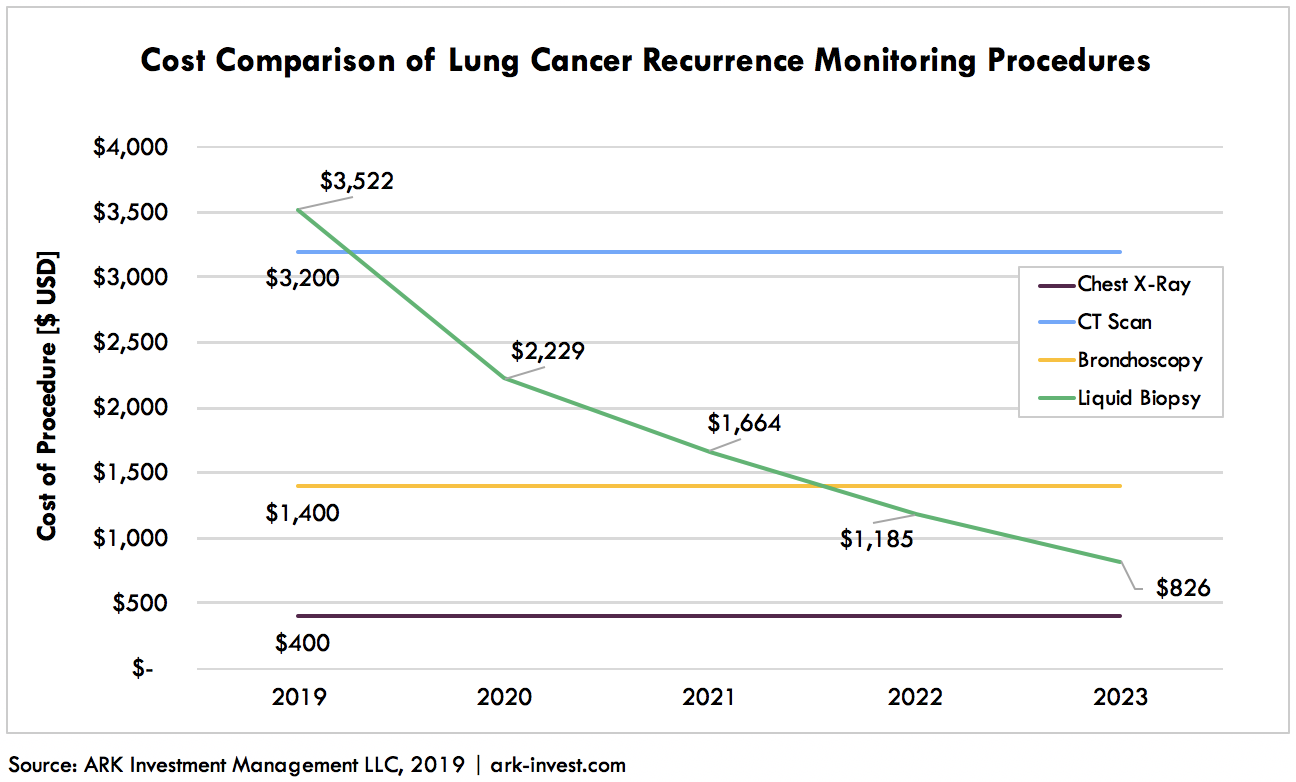 As they proliferate, LBs will generate tremendous amounts of genomic data. As shown below, should all patients with a particular form of cancer undergo an LB based on standard surveillance guidelines, the data generated could be explosive. Each bar measures the number of whole human genome data equivalents produced for each cancer indication in one year. The increase in test intensity across cancer types is primarily a function of the number of Tier 1 mutations likely to be included in future LBs for each indication. Sequencing productivity will be critical to the trajectory of cost and price declines which, based on Wright’s Law, should make liquid biopsies imperative as healthcare systems treat cancer around the world. 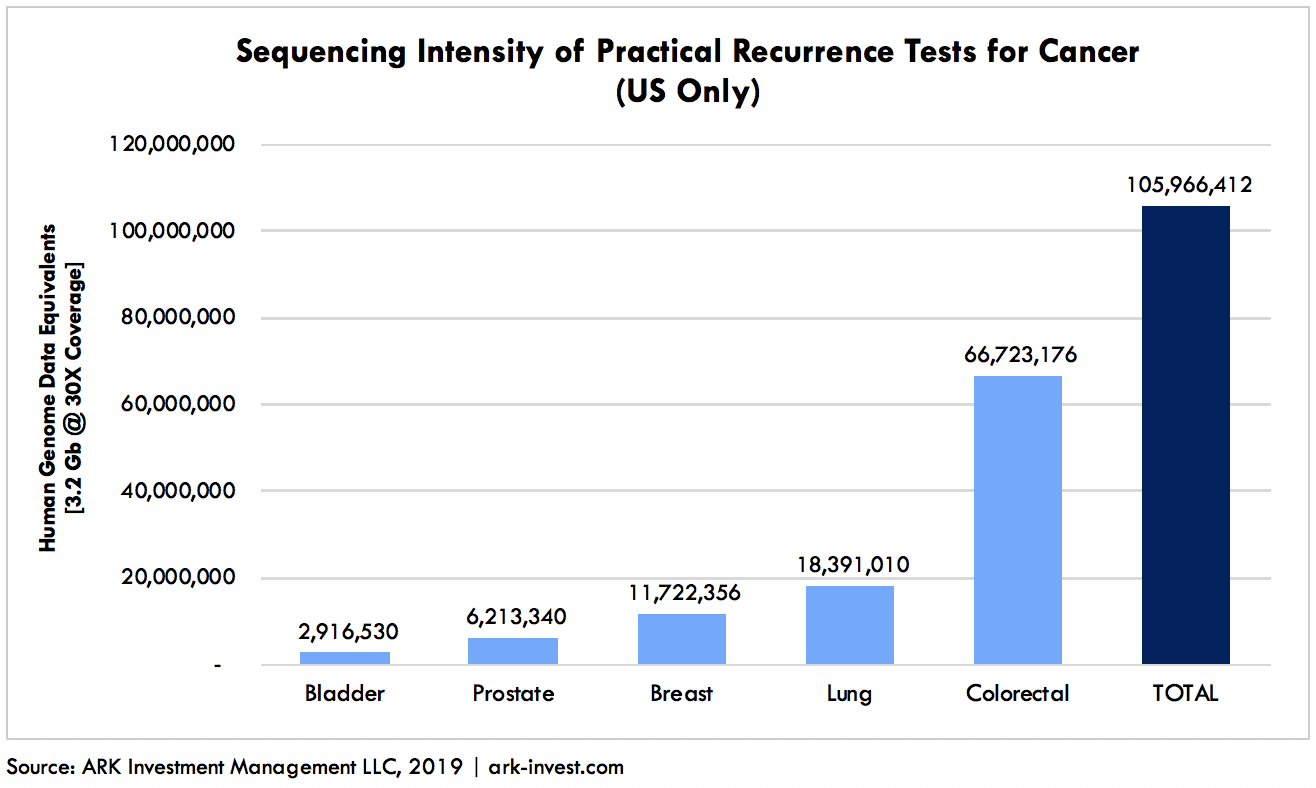