While the Internet of Things (IoT) may not be well-known to the average consumer, it is here. Beyond computers, smartphones and tablets, internet connected devices such as speakers, thermostats, fans, lights, locks and refrigerators are currently available, and many more items will become connected within the next years, as shown below.[1] In January 2015, Samsung [SSNLF] announced that 90% of the goods it produces will be part of the IoT by 2017, and 100% by 2020.

One example of the next wave of IoT devices is a refrigerator that includes cameras sending photos to the cloud upon any movement. Cloud-based image analytics decipher when items run out. The refrigerator then automatically sends a message to Amazon [AMZN], with which the owner has stored their preferences. In less than an hour, an Amazon drone could deliver and replenish the item.

The International Data Corporation (IDC) forecasts that the IoT market will grow roughly 21% per year to $7.1 trillion by 2020. In US households alone, nearly four billion devices will be connected by 2020, and nearly seven billion by 2025, as shown below.[2] 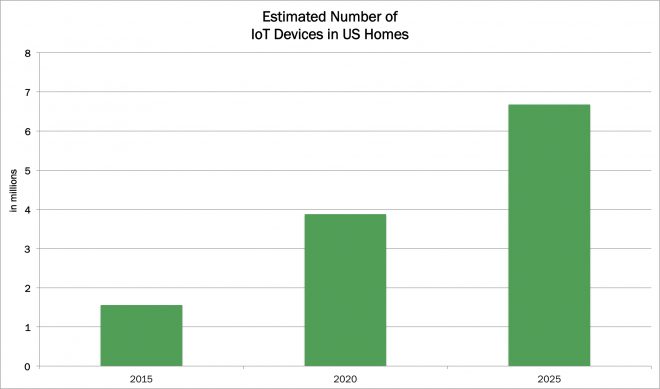 While the number of devices sounds large, its rate of growth is slowing significantly. While the proliferation of smartphones and tablets drove the annualized growth of the IoT installed base by more than 50% from 2005 to 2010, it dropped to 34% during the past five years, and will slow further during the next ten, as shown below.[3] 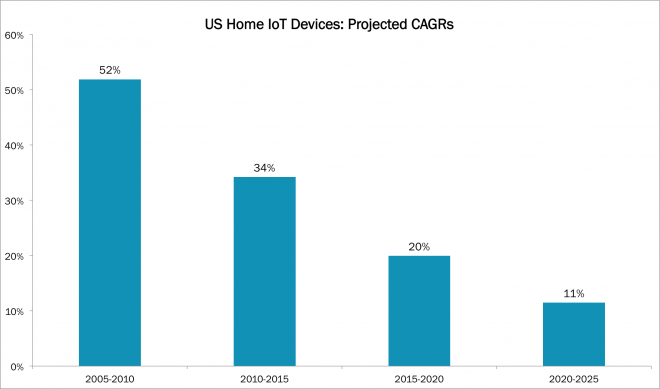 The chart illustrates that the consumer connected IoT has passed the steepest portion of its adoption S curve. Many consumer devices have been adopted en masse during the last ten to twenty years and already have enjoyed accelerated replacement cycles. That said, some consumer product categories could catch fire from here unexpectedly. For example, consumers are paying ten times the average thermostat price for Google’s [GOOG] Nest, due to ease of use and energy savings benefits. Given less power-hungry communication standards at some point in the future, other candidates for Internet connectivity include toys, clothing, and keychains.

More than likely, the next round of IoT proliferation will take place in the industrial, medical, and enterprise spaces. Companies exposed to a variety of products and services within the IoT will be in the best positions to benefit. For example, NXP Semiconductors [NXPI] produces hardware components for small devices, with a focus on security. ARM Holdings [ARMH] licenses powerful processors, graphics processing units (GPUs), and microcontrollers (MCUs). Tableau [DATA], a data analytics company, has created a visualization application called Project Elastic that promises to make analyzing your IoT data as addictive as swiping through Tinder