Kevin Ashton coined the term Internet of Things (IoT)[1] in 1999. In January 2014, Cisco’s (CSCO) then CEO, John Chambers, pegged its global financial impact at $19 trillion by 2020. Now in the role of Executive Chairman, Chambers went on to say at Fortune’s 2015 Global Forum that he expects 500B internet connected devices by 2025. For the IoT to harness and fulfill its potential, however, unified communication standards must facilitate add-on connection of devices, creating an IoT standard that allows for fluid data transmission.

It is important for a thematic investor to discern which communication standards will prevail, because they will have a strong network effect, boosting associated companies. ARK Invest predicts that Bluetooth Low Energy (BLE)[2] will be the predominant network IoT standard for small sensing devices, which will provide tailwinds to chipmakers, device makers, and more that are heavily focused on BLE.

Currently, the standardized stack of Wi-Fi,[3] BLE and national cellular networks serves as the IoT communications backbone. With time, this networking IoT standard will have to become more flexible to accommodate additional end-uses. For example, Wi-Fi is great for connecting a computer to high speed Internet, but too energy intensive for many small sensing devices. BLE is low energy, but historically has been hampered by limited range. Cellular networks are widespread, but bandwidth is limited and data rates are expensive.[4] 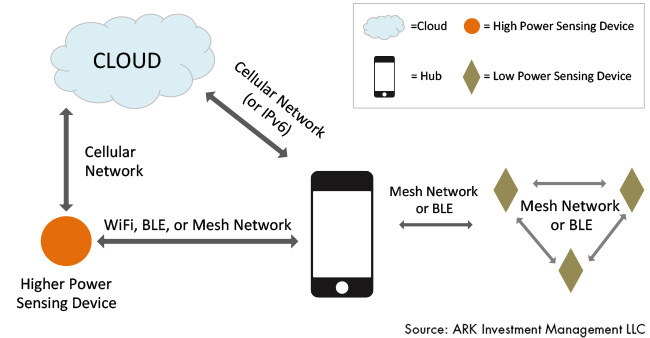 It will be particularly important to have tier 1 cellular modem manufacturers, like Qualcomm [QCOM] and Broadcom [BRCM], on the same page. Both believe BLE is preferable as the low energy solution. At one point, Chris Boross, President of the Thread group, argued that BLE wouldn’t work because it is not a true mesh network. Qualcomm countered by acquiring CSR and its CSRmesh technology in late 2014 for $2.5B.

Tags: Drones, Ecommerce
See More
See all articles
You are leaving ark-invest.com
By clicking below you acknowledge that you are navigating away from ark-invest.com and will be connected to ark-funds.com ARK Investment Management LLC manages both web domains. Please take note of ARK’s privacy policy, terms of use, and disclosures that may vary between sites.
PROCEED