Surprisingly, while the “Internet of Things” (IoT) is nascent, research suggests that its growth rate in US homes has peaked,[1] at least for now, as shown below. Before it can reaccelerate, the IoT ecosystem must overcome four hurdles: high prices, complicated interfaces and controls, unreliable interoperability, and the inaccessibility of data driven insights. If it can overcome these challenges, as ARK Invest believes it will, the IoT will enjoy network effects likely to dwarf any of those that have come before it. 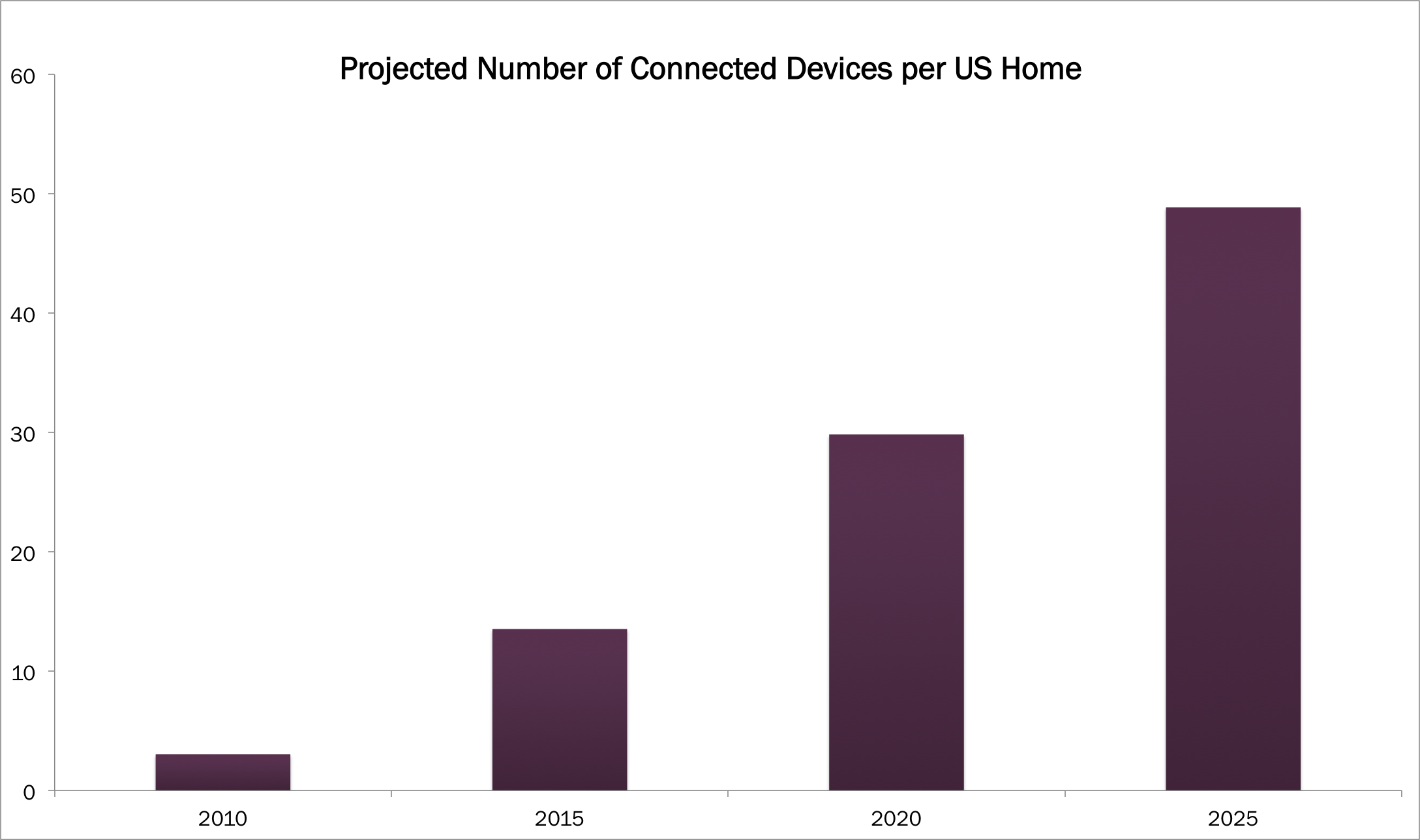 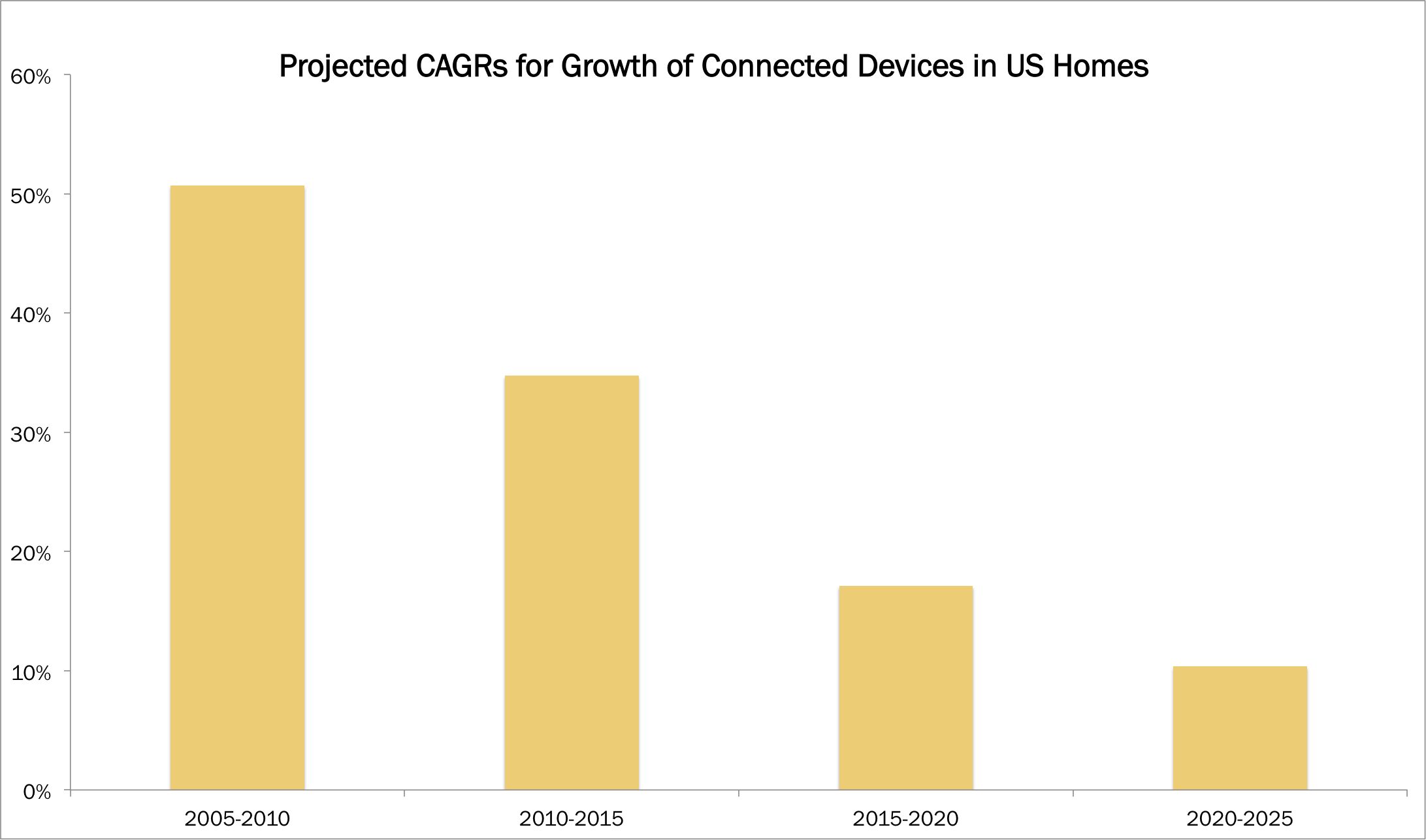 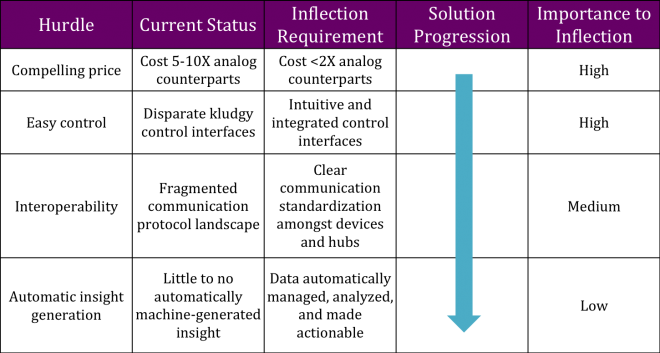 The average IoT device costs five to ten times more than its analog counterpart, with a Fitbit weight scale retailing for $130, and Nest [GOOG] thermostats for $249. Both of these products deliver high profit margins. For example, CNN Money reports that the hardware within Nest is roughly $69, less than 30% of its per unit retail price.

Chips with WiFi and Bluetooth capability, the primary connectivity components in an IoT device, cost less than $13 per unit when 500 units are purchased. If Cisco’s [CSCO] prediction of a decline of 25% in annual connectivity prices is correct, then by 2025 these chips will cost less than $2, as shown below. 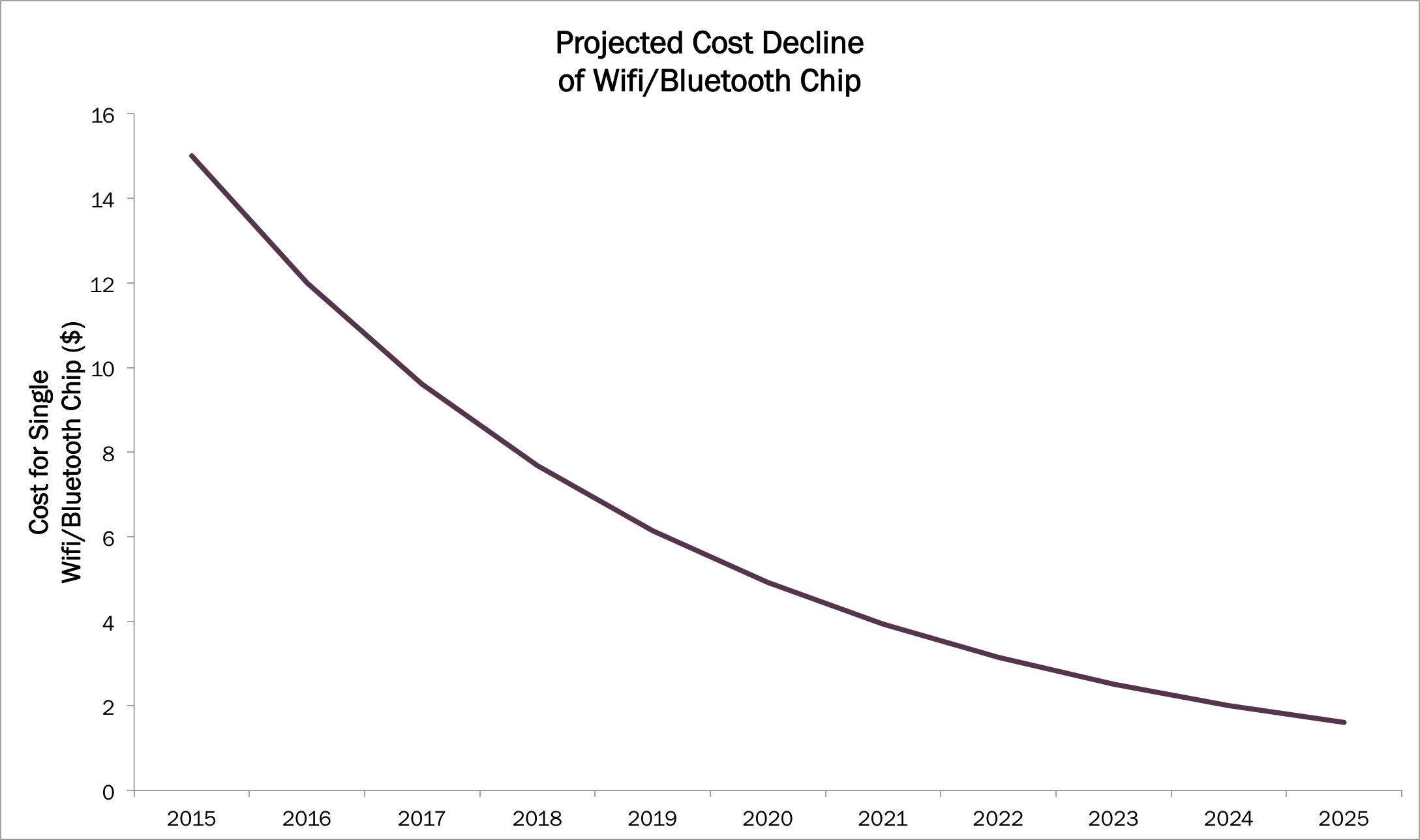 Several companies are developing apps to control multiple devices, increasing the efficiency of the IoT ecosystem. Most of these control aggregators are private, chief among them Arghon Artificial Intelligence Engine and Peel. Through its acquisition of another private company, Aviate, Yahoo [YHOO] is learning how users interact with their phones, and could potentially configure and reconfigure home screens based on IoT device locations and context. Google Now has the potential to provide a similar service.

Some companies are bypassing screens altogether, improving battery life as an important byproduct. Released in late 2014, Amazon’s Echo [AMZN] is a voice controlled music speaker that also can control Belkin’s WeMo smart outlets and Philips [PHG] Hue lights. It also has the potential to serve as a voice controlled ordering platform for Amazon Prime. Alternatively, Thalmic Labs is focused on gesture control, so that hand movements can direct objects; for example, a swipe of the hand through the air might shut off a noisy robot vacuum which is drowning out an important phone call.

The IoT ecosystem will evolve, guided by standards as devices increasingly communicate and share information. While standards still are being debated, the Allseen Alliance, which Qualcomm [QCOM] initiated and the Linux Foundation has adopted, appears promising as an open source solution.

A number of companies are surfacing to enable this IoT ecosystem. Ambarella [AMBA], for example, makes a system on a chip (SoC) for IP[2] cameras that not only capture and compress video, but also can be programmed to send only relevant information, like all pixels containing the color red. In February, CEO Fermi Wang declared at the Stifel 2015 Technology, Internet & Media Conference that Ambarella is transitioning away from video capture as its prime focus, and towards video analytics. Such in-camera analytics could provide all kinds of alerts: for example, when children arrive home, or the post office has delivered packages, or a stranger is prowling around the house.

Other companies are enabling the analysis of data aggregated from multiple devices. Tableau’s [DATA] Project Elastic is empowering consumers and businesses to explore many data sets on tablets simply by swiping, pinching, and zooming. An alternative option is GoodData’s “Insights as a Service,” which capitalizes on the network effect of people analyzing all kinds of data sets on its platform, to inform consumers and businesses on how to analyze their own data in the context of a much broader universe. Arghon AIE is also a thought leader in this field, as it feeds insights to users based on the multiple-device-data it collates and pushes through its Artificial Intelligence Engine. Potential insights include discovering the link between frequency of a refrigerator door opening and weight gain, or a link between the quantity of coffee brewed in an IoT Coffee Maker and sleep habits.