In May 2015, ARK did its first survey of user engagement with the three largest social platforms: Facebook [FB], Twitter [TWTR], and Instagram. We found that while Facebook dominated in absolute reach and Twitter owned real time news, Instagram was becoming the go-to destination for savvy brands and celebrities. In June of 2016, we repeated the same survey. While we expected similar trends, we were surprised at how much Instagram followers and engagement have skyrocketed among brands and celebrities. Instagram seems to be cementing its position as the ideal platform for premium brand advertising. Consequently, we think Instagram could capture a large share of premium print and TV advertising dollars as they migrate online.

Almost all major brands host official accounts on Facebook, Twitter, and Instagram. Users voluntarily “follow” these accounts to receive posts, pictures, and videos. The number of followers is a good measure of the reach of a brand on a social platform.

In the second quarter of 2015, Instagram followers began to surpass Twitter and Facebook for certain brands online, as shown below. Instagram’s monthly active users (MAUs) overtook Twitter’s in 2015, so its share gain in that competition was not surprising. 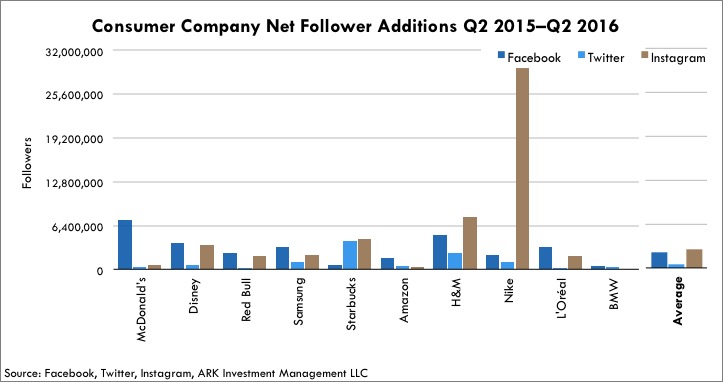 This year, however, for the first time Instagram followers have exceeded Facebook followers for a major brand—Nike [NKE]. This share shift is surprising because Instagram only has a quarter the number of MAUs. More surprising is the magnitude of the growth (as shown below): Instagram now has nearly two times the number of followers. 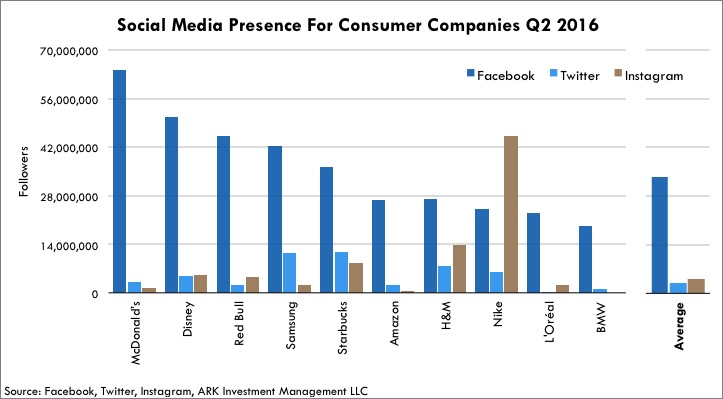 Among celebrity accounts, Instagram’s growth was even more dramatic. Instagram was the fastest growing account for eight out of ten celebrities by a wide margin. As shown below, Justin Bieber, Taylor Swift, Beyoncé, Selena Gomez, and Ariana Grande added 30-45 million Instagram followers each. 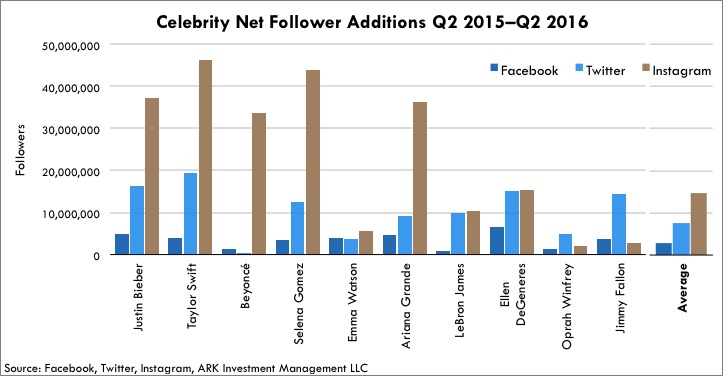 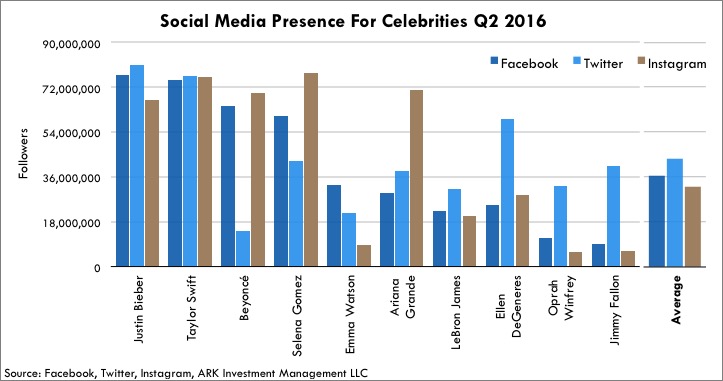 Each social network appeals to a specific demographic for a specific reason. Instagram’s disproportionate distribution power among brands and celebrities suggests that it is becoming a mobile-centric lifestyle magazine/channel—a new breed of Conde Nast/Cosmopolitan/MTV. Just like glossy lifestyle magazines, Instagram’s advertising blends seamlessly into organic content, making it more attractive and engaging than obtrusive banners and web page takeovers. 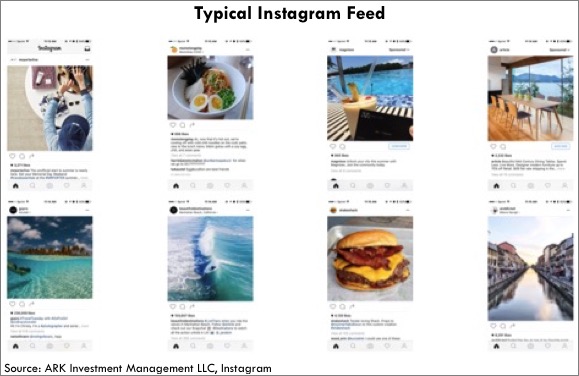 Instagram has become an ideal platform to reach young and affluent audiences, as they migrate from TV. TV viewership is heavily skewed toward older audiences, as shown below. In the US, TV viewing among 18-24 year olds has dropped by a third in the last four years according to Nielsen. 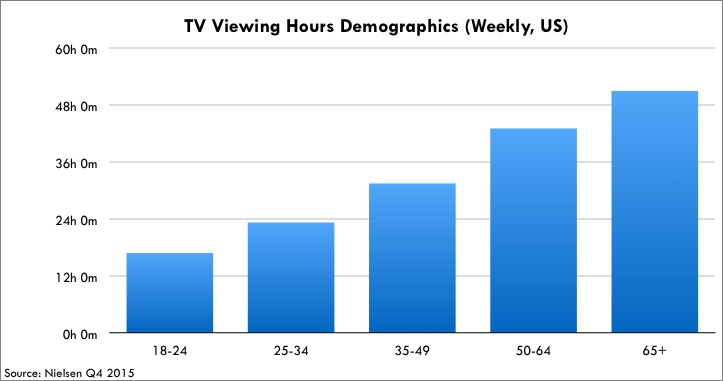 In contrast, more than half of Instagram’s users are between 18 and 29 years old, and less than 5% are older than 65, as shown below. 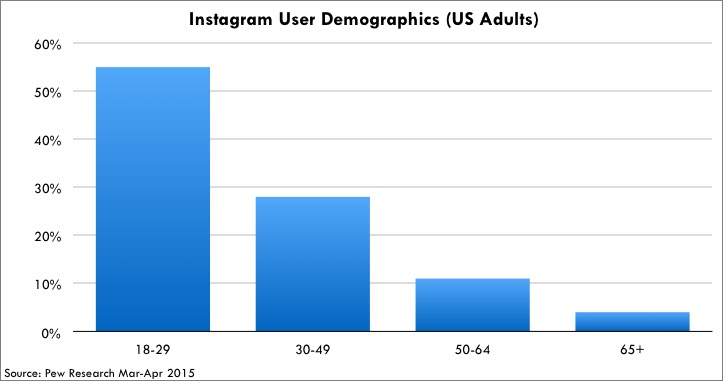 With the generational shift in media consumption away from TV toward mobile devices, advertisers likely will shift their budgets toward digital platforms like Instagram, YouTube, and Snapchat. Print will be the biggest loser, as shown below. 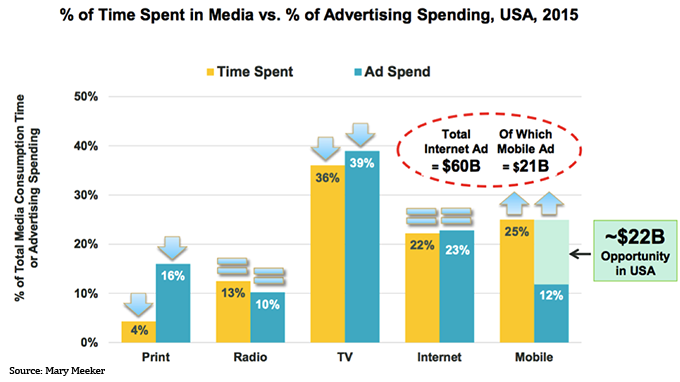 These days, Instagram is impacting lifestyle content dramatically. While a typical Condé Nast publication has circulation in the single millions, Instagram reaches over 400 million people monthly. As shown above, advertisers not only over-spend on print but they under-spend on mobile relative to consumer engagement. This presents a sizable opportunity for mobile centric apps like Facebook, Instagram (owned by Facebook), and Twitter. Instagram’s combination of high production value, captive mobile audience, and Facebook-backed measurement and targeting may be the solution that finally helps fill the $22 billion mobile opportunity.

Tags: Advertising, Digital, Video Streaming
See More
See all articles
You are leaving ark-invest.com
By clicking below you acknowledge that you are navigating away from ark-invest.com and will be connected to ark-funds.com ARK Investment Management LLC manages both web domains. Please take note of ARK’s privacy policy, terms of use, and disclosures that may vary between sites.
PROCEED