Illumina [ILMN] is the cornerstone of our Genomic Revolution theme, and one of our highest conviction stocks.  In response to an earnings preannouncement this week, it dropped as much as 25% in one day.  While investors fear that it has passed its fastest growth rate, in our view Illumina is leading a genomic revolution that has just begun.  The real surprise will be a significant reacceleration in its growth rate during the next few years.

Before addressing the quarter, let’s put DNA sequencing and Illumina’s positioning into perspective.  DNA sequencing is unlocking the code to life, disease, and death.  It is decoding cancer pathways and helping researchers discover how to shut them down. DNA is the body’s “instruction set,” determining its predisposition to sickness and health, as well as its response to food, drugs, and the environment. The composition of the nucleic acid in DeoxyriboNucleic Acid (DNA) is the cause of every biological process.  Illumina’s DNA sequencers read the “instruction set” to determine the nucleotide pairings that ultimately characterize gene sets.

Illumina is to the genomic revolution what Microsoft and Intel were to the computing age, or Google is to search. Illumina has more than 90% market share of the base pairs of DNA sequenced around the world today.  If anything, its share has increased as the competition has struggled: Complete Genomics sold out to the Beijing Genome Institute; Roche shut down its 454 sequencing business; Oxford Nanopore has delayed sequencer launches in response to high error rates; and Pacific Biosciences’ “long read” sequencers are cost prohibitive for human DNA sequencing.

DNA sequencing is following a cost curve decline that is steeper than microprocessors enjoyed during the past 40 to 50 years.  This cost curve is a set-up for extraordinary growth in unit demand for DNA sequencing once today’s growing pains disappear and more entrepreneurs join the race to eradicate diseases and extend human life.  Since 2001, and as shown below, the cost to sequence one whole human genome has dropped from $100 million to $1,000, or more than 50% per year, a decline unrivaled by any other general purpose technology platform in history. 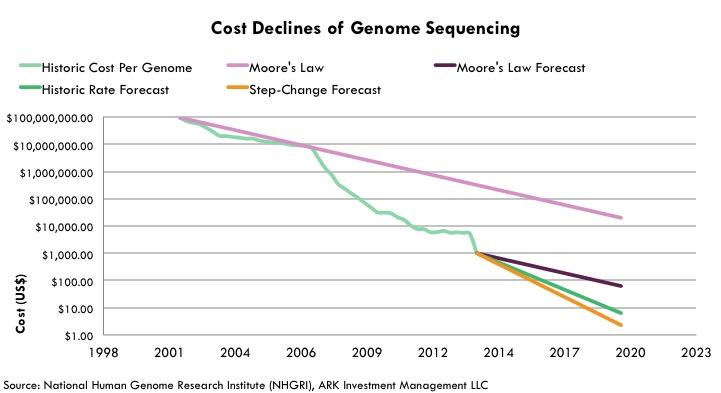 Based on ARK’s research–illustrated below–even with a slowdown in the rate of cost declines, the number of whole human genomes sequenced should catapult from 600,000 in 2015 to 50 million by 2020, more than doubling annually in the coming five years.  It is important to note that these numbers do not include the sequencing of plants, animals, viruses, or bacteria.  On this basis, the total number of genomes sequenced over time will extend into the trillions.   We are truly in the earliest days for one of the more provocative examples of exponential growth in the world of disruptive innovation. 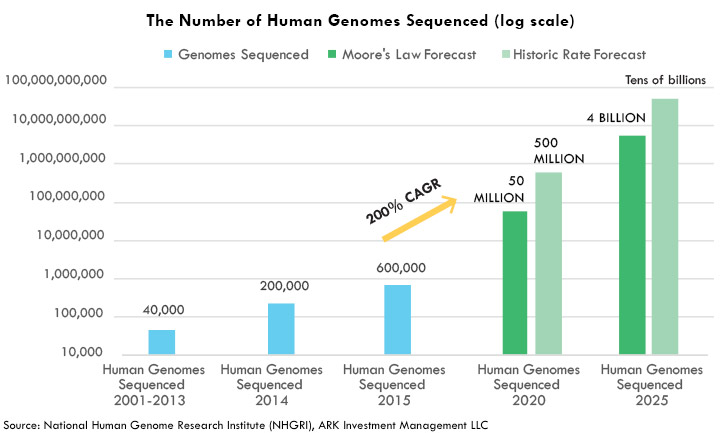 SO, WHAT THE HECK HAS HIT ILLUMINA’S STOCK?

In short, CEO Jay Flatley explained that two factors have hit Illumina, both of which are short term in nature, and neither a showstopper to the genomic revolution.  In fact, one of the perceived issues will provide a bridge for many more companies to join the revolution.

The first factor was management’s “execution” in Europe, which the company is addressing in full force.  A number of technology companies, notably Salesforce.com, have faced the same problem and, with more focus from the home office, have turned around dramatically.  Illumina’s book-to-bill elsewhere, 1.4 in the US and 1.2 in Asia-Pacific, suggests that its business in most of the world is gathering momentum.  We believe that Europe should not be far behind.

The second factor behind Illumina’s second quarter weakness was due to cannibalization, but it was the “good” kind. Illumina is enjoying great success at the high-end of its market with the HiSeqX-10 sequencer, which costs $10 million, and thanks to it, Illumina is able to sequence a whole human genome for $1,000.  Its less expensive sister products cannot match that price point per unit for sequencing a whole human genome.  Consequently, smaller labs increasingly are outsourcing their sequencing needs to large service providers instead of buying lower-end machines.  While Illumina’s overall revenue growth was a tepid 6% on a year-over-year basis, HiSeqX shipments increased 20% and, pointing to an increase in the capacity utilization of existing machines, consumables were up 24%. Indeed, the growth in total consumables has accelerated from 18% on average in 2014 and 23% in 2015.

Illumina has 90% share of one of the most dynamic and important innovations in history.  Based on ARK’s research, Illumina’s declining cost curve will permeate the $3.5-4 trillion health care and agricultural biology industries while improving wellness and life expectancy in ways that we cannot fathom.  As illustrated above, ARK expects that the sequencing test market, as we know it today, will generate revenues in the $5-10 billion range within the next five years. The phrase “as we know it today” obfuscates how wide-open the market and appetite for DNA sequencing currently is and will continue to be in the future. For example, Grail–a joint venture in which Illumina owns a 51% share and has secured investments from Bill Gates and Jeff Bezos–is aiming to detect cancer in its earliest stages, as opposed to late stage detection. Grail hopes to have liquid biopsy tests on the market by 2019.  According to Illumina’s estimates, detecting stage 2 cancers will open up a $20-30 billion opportunity– and in stage 1, a $200-300 billion opportunity–putting the 25% drop in Illumina’s market cap to $20 billion in stark relief!