According to the CDC, nearly 80% of office-based physicians in the US currently use some form of electronic health record (EHR) for managing their patient data. This number has increased over the past decade from about 20%, as shown in the below chart from a CDC report published earlier this year. The adoption of electronic health records has been motivated by the hope that health IT will improve the quality and efficiency of health care delivery, as well as by federal incentive programs put in place in 2009.

This adoption is happening at the same time as software-as-a-service (SaaS) models are disrupting traditional enterprise software. Healthcare IT is no exception. AthenaHealth [ATHN] was the first pure play health care cloud services provider to go public. Others, such as CareCloud and Practice Fusion, are private, while some of the established companies are beginning to offer cloud services alongside their legacy client-server-based products.

The cloud is starting to separate the winners from the losers in the EHR space. As shown below, 2011 and 2012 were big years, with most companies enjoying annual revenue growth at or above 20%. Since then, growth has decelerated to 10% or less…with one notable exception. It is clear AthenaHealth is taking market share and continues to grow at a rate of 30% or higher. 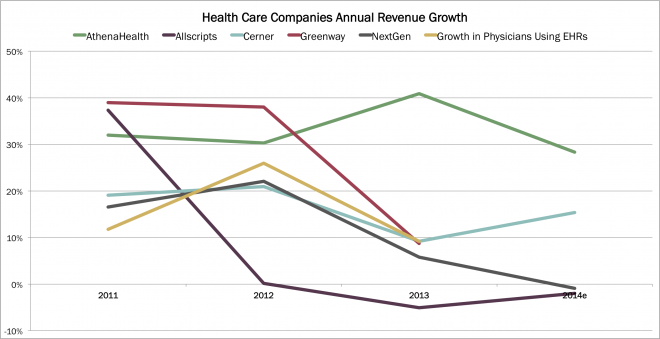 Normally 80% adoption would suggest that the transformation in health IT is mature, as it is for the legacy solutions. Indeed, thanks to fiscal stimulus the government subsidized the rapid move from 50% to 80% penetration and probably gave a lot of traditional enterprise software one last gasp. Now, however, SaaS is proving to be the better solution. Much of AthenaHealth’s incremental growth is at the expense of the established vendors. The adoption of health IT spawned a new industry, just in time for cloud computing to disrupt it.