A special thank you to Cyrus Sigari for his insights and contributions to this piece. To stay up to date with all eVTOL (electric vertical take-off and landing drones) and Urban Aviation news be sure to subscribe to his TransportUP’s newsletter.

Each year in the US, roughly 350,000 cardiac arrests occur outside of hospitals (OHCA), and only 12% of the victims survive. One reason the survival rate is so low is that ambulances take 11 minutes on average [1] to arrive on the scene after a call to 911. While impressive, a shorter response time could save many lives, as shown in the chart below. 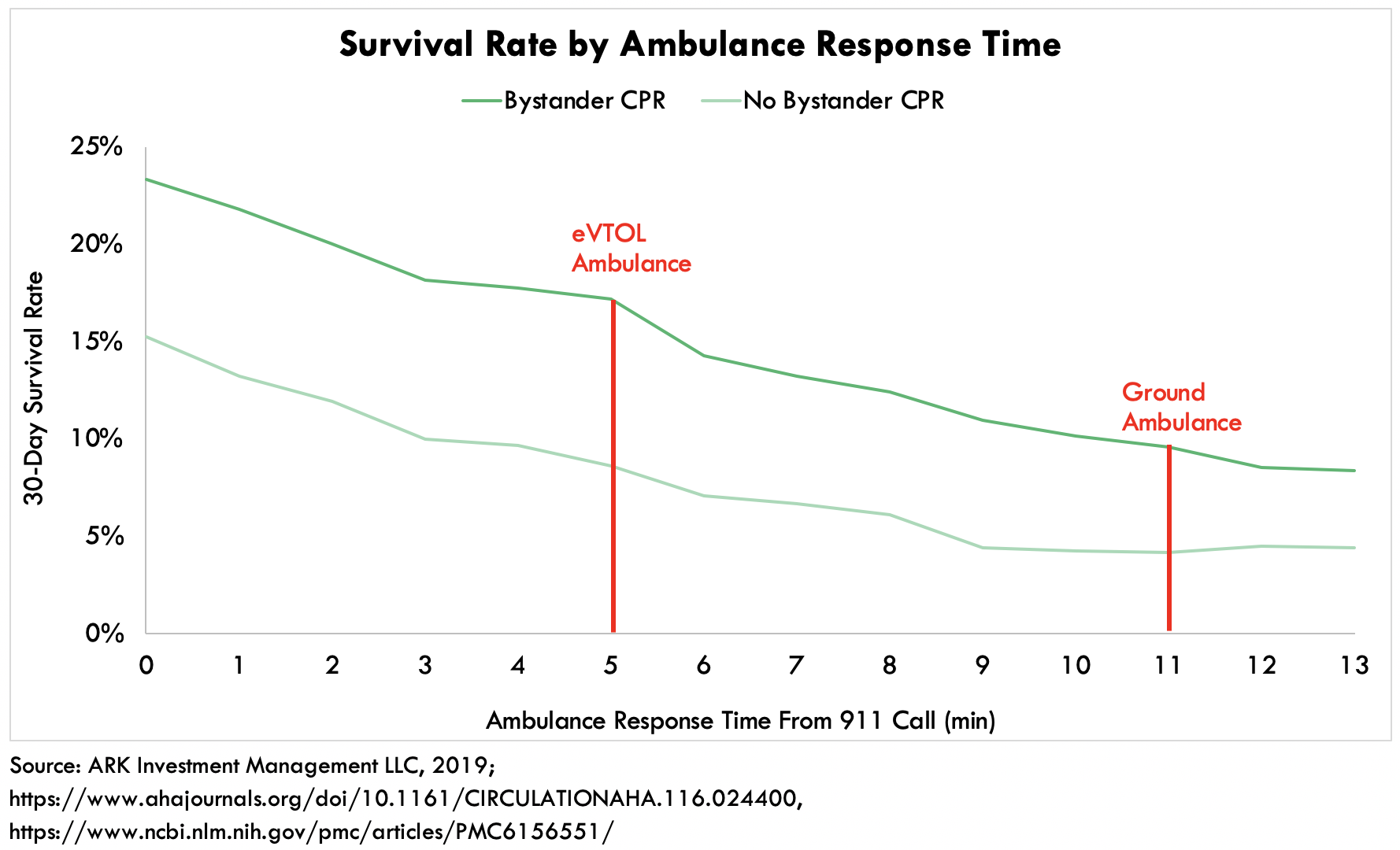 In this blog, we build the case for a sizable eVTOL opportunity in the US based only on the OHCA opportunity. We conclude that the health care system should be willing to pay more than $880,000 for each life-saving trip, creating a $20 billion market for eVTOL ambulances.

ARK’s models assume that after a 911 call reporting a cardiac arrest, a medical technician will be dispatched in an eVTOL and followed by a traditional ground ambulance, as shown in the schematic below. As a result, response times will be faster, incremental costs will be minimal, and transportation by way of ground ambulances will be safer. 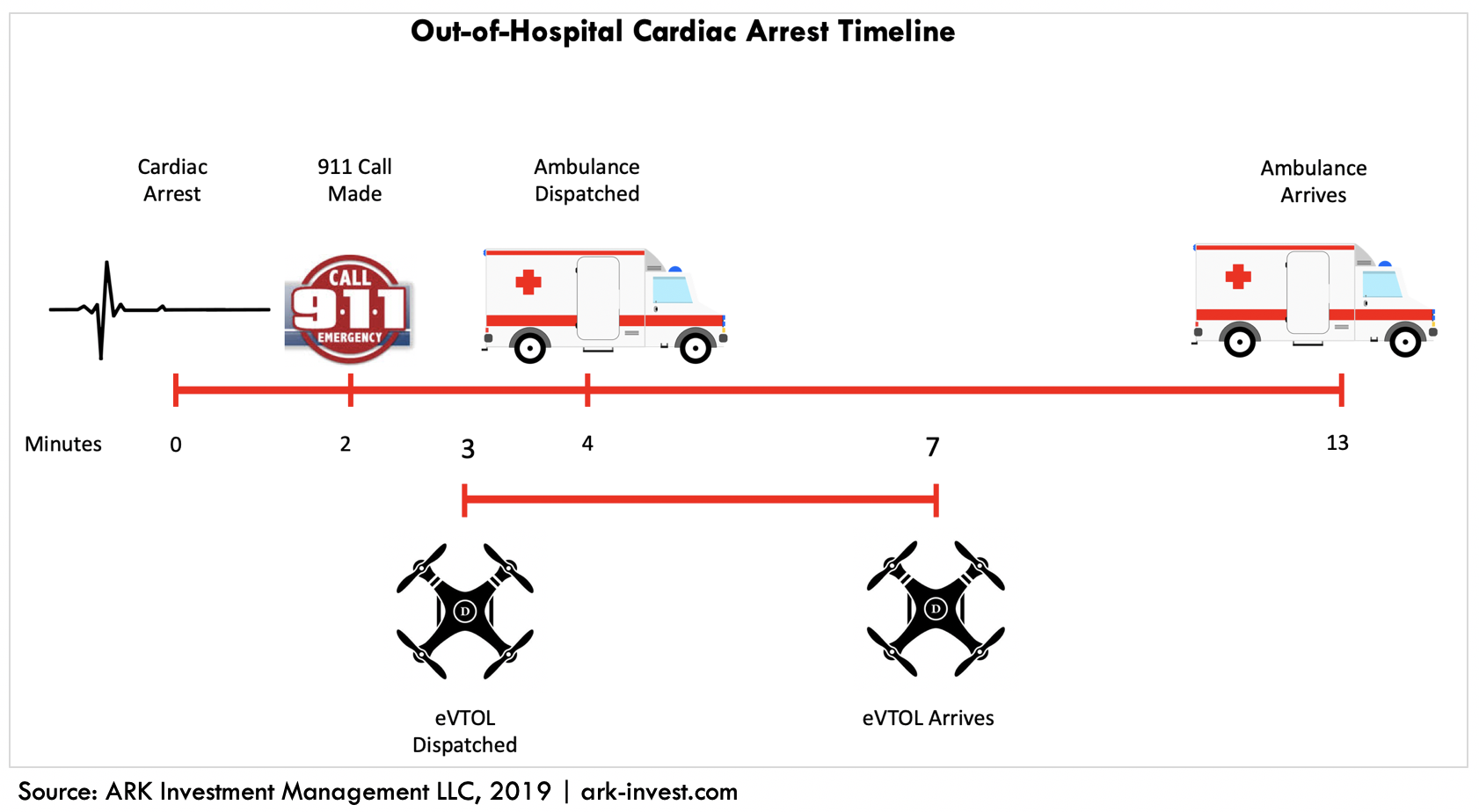 Ambulance operators face fixed costs that are much higher than variable costs, making upfront costs particularly high, as shown in the chart below.[2] 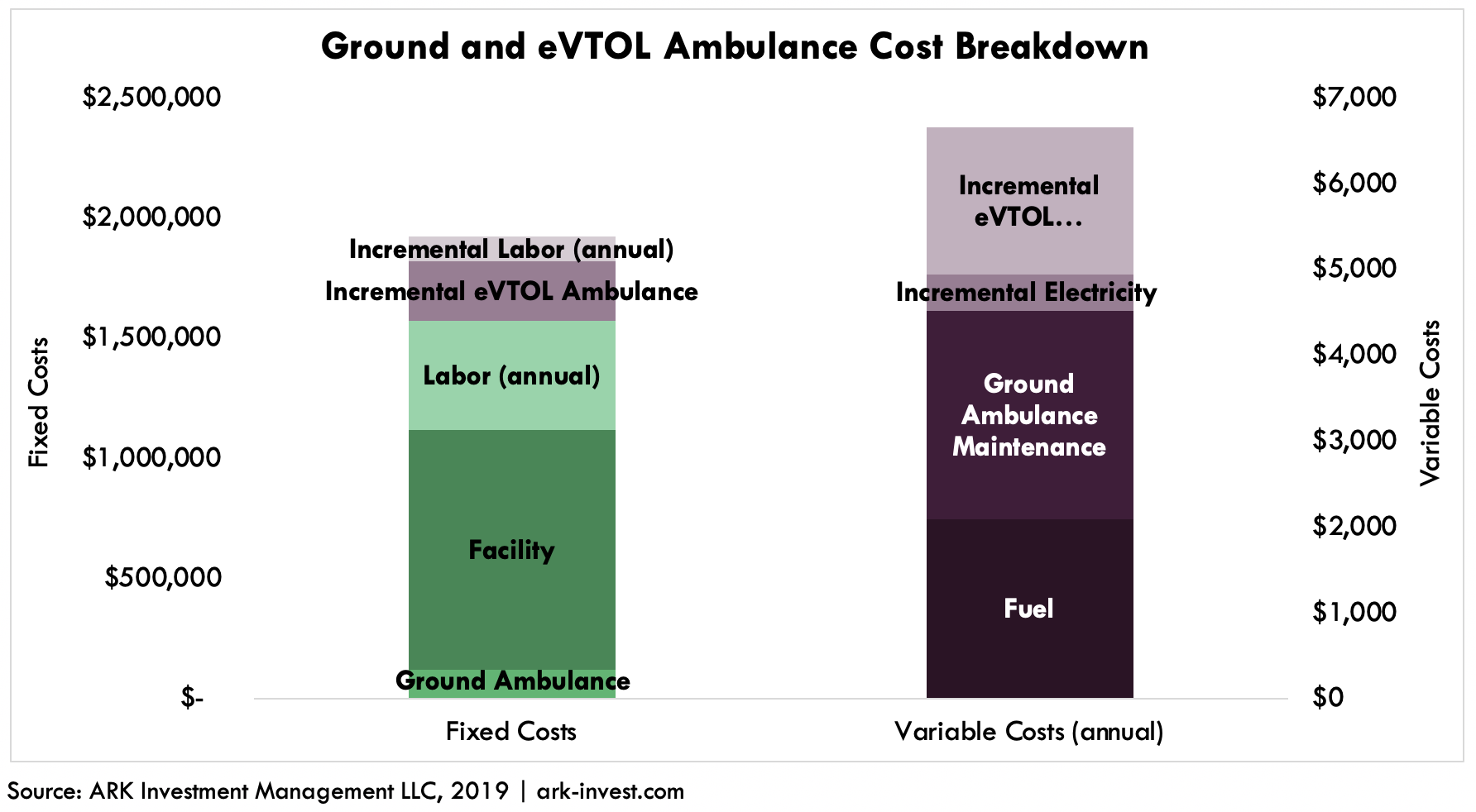 In early days, ARK expects a first generation eVTOL like Opener’s Blackfly to cost $250,000, compared to roughly $120,000 for a traditional ambulance. Integrated into existing air traffic control systems, it probably will require a pilot or remote operator and cost $360 on average per ride, much less than the $1,000 for a traditional ambulance.[3] Over time, prices likely will fall even further toward $150 thanks to the emergence of autonomous eVTOLs operating in software-centric air traffic control systems. We illustrate these differences in the chart below.[4] 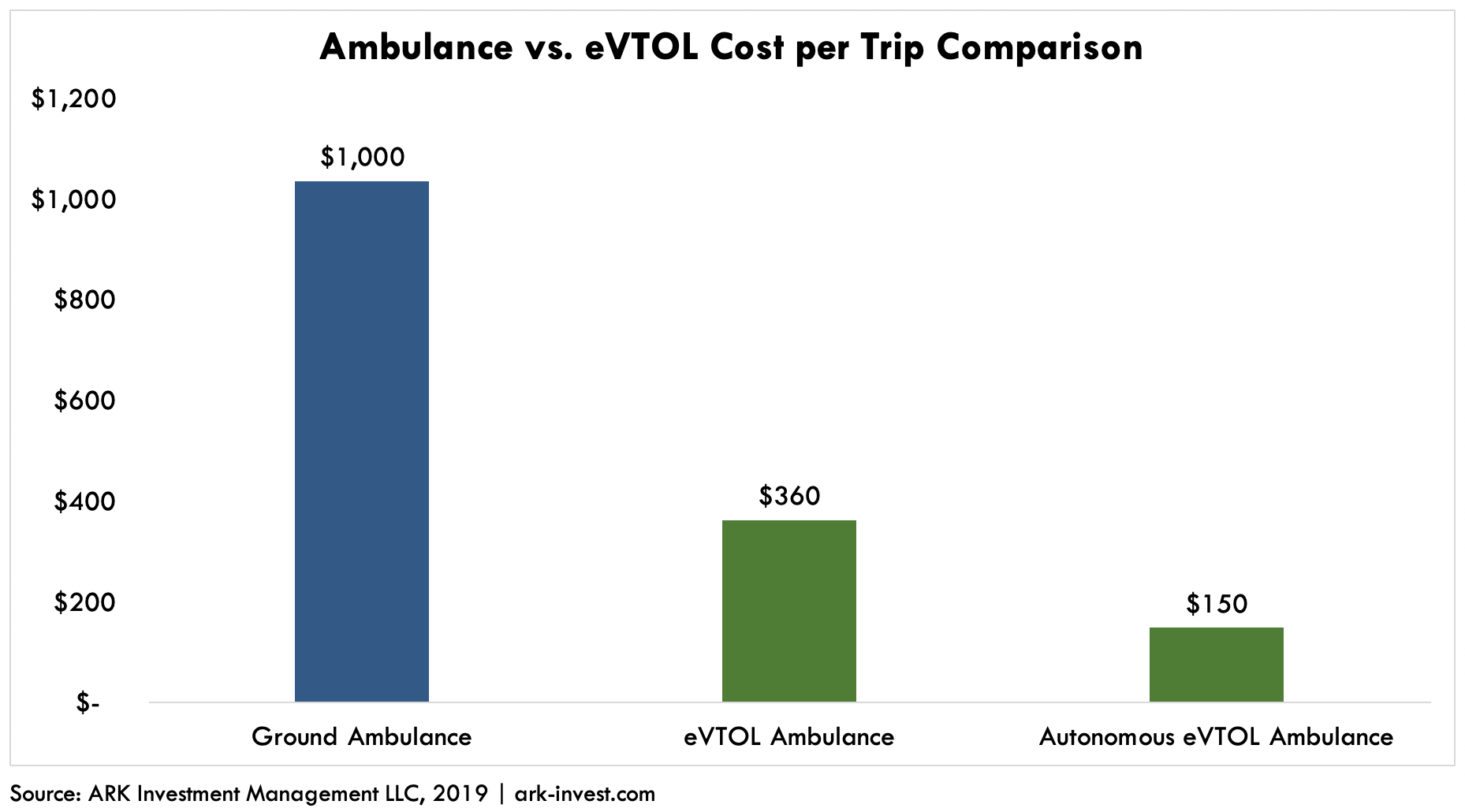 Given the high fixed cost base, utilization should be the key driver of eVTOL unit economics. ARK expects the utilization of eVTOL ambulances to be much higher than traditional ambulances, because they travel faster, can cover larger territories, and depart soon after traditional ambulances arrive on the scene. In contrast, based on ARK Invest’s research, ground-based ambulances typically treat patients for 1-1.5 hours and are underutilized in widespread rural areas.

According to a number of studies,[5] ambulance response times and whether or not CPR starts before an ambulance arrives play important roles in OHCA patient outcomes. Only ~12% or 42,000 of the 350,000 annual OHCA patients in the US survive. An eVTOL could reduce the ambulance response time to five minutes from eleven minutes, which suggests that an additional 20,000 lives could be saved.  If so, the OHCA survival rate would increase from 12% to 18%.

Saving 20,000 lives per year will come with incremental costs which, according to our research, will be dwarfed by the benefits. Of OHCA survivors, 60% were alive after 15 years, as shown in the chart below.[6]

Based on rough estimates, each life would be worth roughly $880,000, given the weighted average life expectancy following cardiac arrests and factoring in GDP per capita,[7] which applied to roughly 20,000 lives would yield an annual benefit of $18.3 billion. If the eVTOL ambulance service were to cost an additional $150 per patient, the annual cost in the US would be an incremental $2.7 billion, suggesting that the benefit would be more than six times the cost, as shown in the chart below.[8] 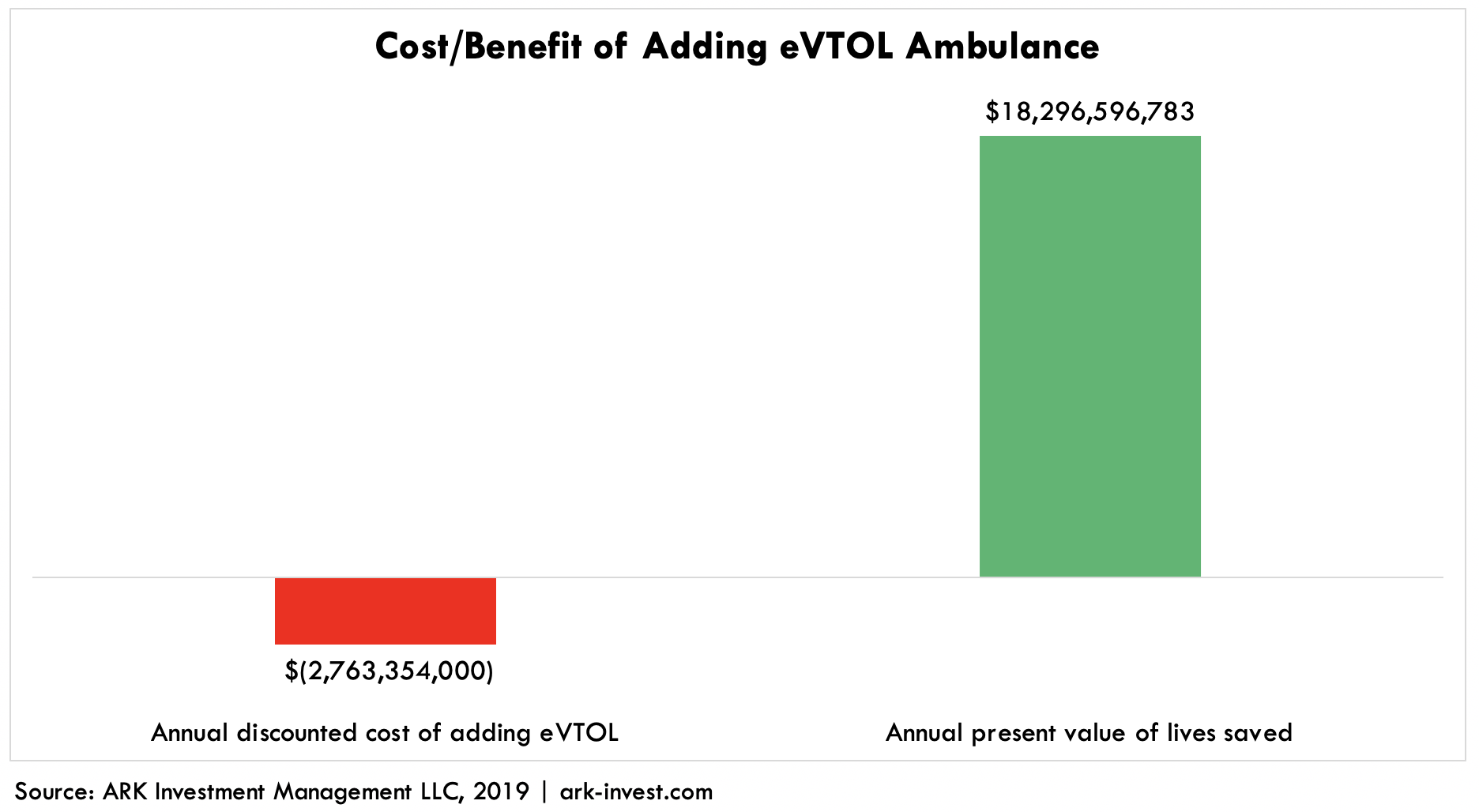 Based on the NASEMSO survey of the EMS industry, ARK estimates that complete coverage of the US would require 78,000 eVTOLs (similar to the number of ground ambulances), each costing $250,000, creating nearly a $20 billion addressable market for eVTOL ambulance manufacturers.

Not included in the cost benefit section above are the lives saved from reduced ambulance collisions. Ambulance transportation involves some terrifying experiences as they careen through intersections while racing to the scene. According to NHTSA, ambulance crashes are responsible for 33 fatalities per year on average in the US,[9] which means that they are more dangerous than helicopters, as shown below. That said, helicopter ambulances are roughly twice as dangerous as ground ambulances. ARK’s research suggests that eVTOLs will be much safer than traditional helicopter ambulances, given their reduced size and better maneuverability. 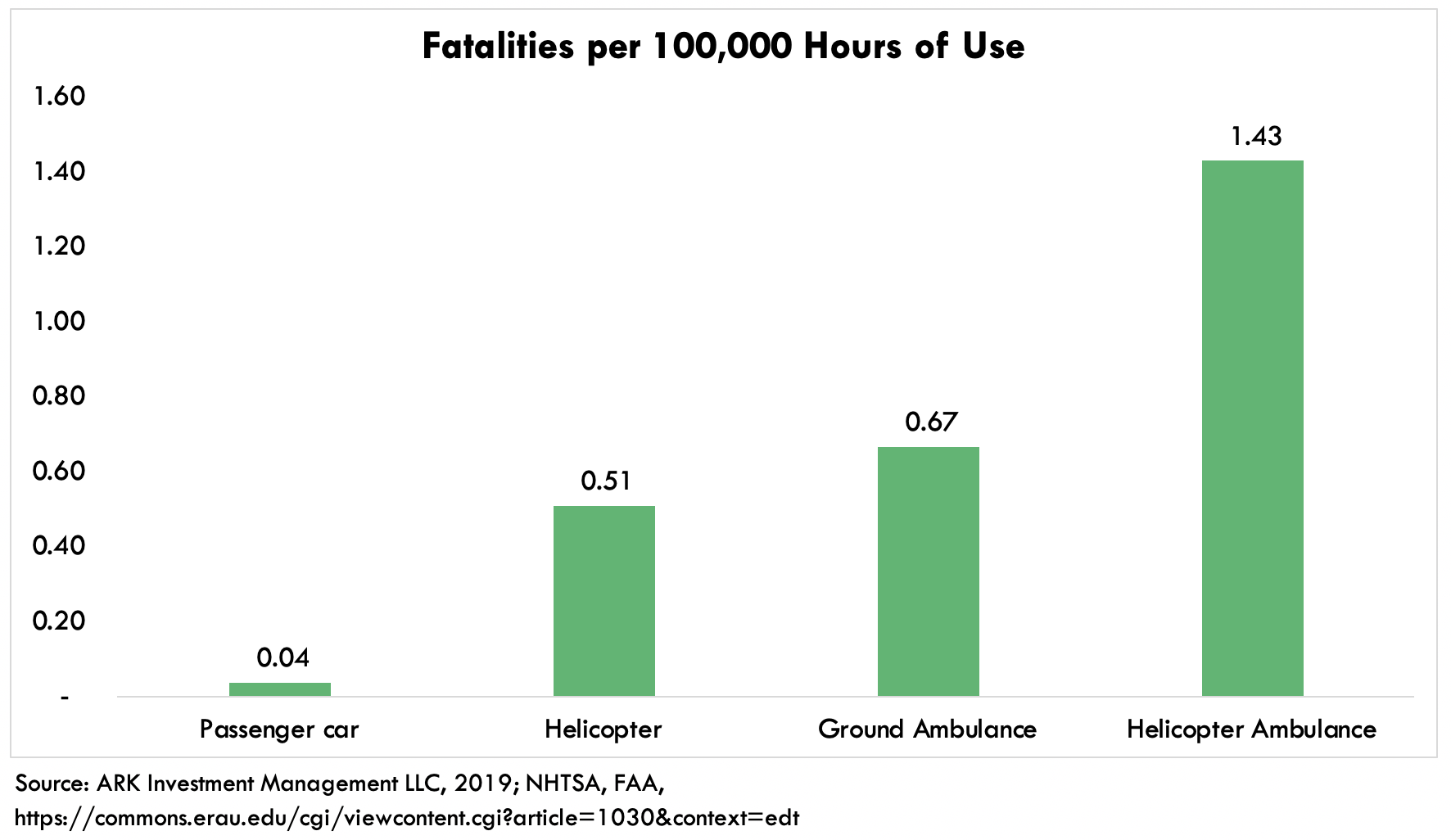 Many experts characterize ground ambulances as ineffective, costly, and dangerous solutions in response to OHCAs, but not only are they the best solution today but, unlike eVTOLs, they also can operate in nearly all-weather conditions. A number of obstacles may be preventing broad adoption of eVTOL ambulances today, but their use case for first responders is compelling. ARK’s work suggests that rural areas are better suited to eVTOL ambulances given the slower response times and systems engineering issues typical in less well populated areas.

Tags: Energy Storage, Sustainability, Sustainable Investing, Wright's Law
See More
See all articles
You are leaving ark-invest.com
By clicking below you acknowledge that you are navigating away from ark-invest.com and will be connected to ark-funds.com ARK Investment Management LLC manages both web domains. Please take note of ARK’s privacy policy, terms of use, and disclosures that may vary between sites.
PROCEED