The Case for an EV Semi Truck

While automakers are waking up to the realization that electric drivetrains are the future of passenger vehicles, many manufacturers remain skeptical that heavy-duty hauling vehicles will succumb to electrification. They continue to assert that batteries are too expensive, too slow to charge, and too heavy to be incorporated into long-haul fleets. Not surprisingly, they scoffed when Tesla [TSLA] announced plans to launch an Electric Semi Truck (EV Semi) later this year.

In contrast, ARK’s research illustrates that EV Semis could prove superior to existing long-haul trucking options. Though the upfront cost of EV Semis will be higher than that for traditional models, their total cost of ownership (TCO) will be significantly lower. As shown below, an EV Semi owner will enjoy roughly $500,000 in savings over the 15-year lifespan of the vehicle.

While controversial on the surface, this conclusion incorporates three factors often overlooked in determining the total cost and efficiency of an EV Semi:

According to ARK’s research, two factors will play outsized roles in determining the range efficiency (kWh per mile) of an EV Semi: multiple motors and regenerative braking.

On its first quarter earnings call in 2017, Elon Musk announced that the Tesla EV Semi will have “a bunch” of Model 3 motors with different power requirements, allowing each to operate at maximum efficiency. The Model S 75D (dual motor) has a longer range than the Model S 75 for this reason. By combining motors, Tesla should be able first to provide the output necessary when an eighteen-wheeler accelerates, and then, critically, to reclaim the energy as the eighteen-wheeler brakes. Fully loaded semis require much more power than a single 250 kW motor can provide. With multiple motors, EV Semis can satisfy power requirements as they accelerate and brake.

While multiple motors are critical to performance, regenerative braking has a more profound impact on the performance of an EV Semi. Vehicles spend a lot of energy getting up to speed,[1] with eighteen-wheelers expending proportionately more so. When a non-EV Semi applies the brakes to slow down, it loses all of that energy: all of the fuel used to get the rig up to highway speed dissipates via heat and sound. Not so with an EV Semi: the electric motor can run in reverse, harnessing the energy and recharging the battery. In that way, EV Semis can recoup up to 90% of their kinetic energy, compared to 0% for non-EV Semis.

In other words, an EV Semi that is heavier than a traditional semi can be just as efficient thanks to regenerative braking. Alternatively, as shown below, ARK estimates that, at the same weight and the same energy input, an EV Semi with a single electric motor and regenerative braking should be capable of traveling 75% farther than a traditional semi. With multiple motors maximizing regenerative energy-capture, EV Semis should be able to travel more than twice the distance.

Two factors will limit the amount of energy recoverable through regenerative braking: first, the amount of power produced by running the electric motors backwards and second, the battery pack efficiency. That said, an EV Semi hauling around tons of weight should not kill range efficiency. According to ARK’s estimates, if the EV Semi has roughly 900kw of motor power, the sum of four motors and 87% efficiency, it can recover a significant amount of energy.

While EV Semis pay less of an energy penalty than do traditional semis for taking on more weight, analysts question whether the additional battery weight will negate that benefit. In most cases, the answer is no.

As shown below, most trucks “cube-out,” or run out of space in the trailer, before they “weigh-out,” or hit the maximum 80,000 lbs weight limit. The net weight difference between an EV Semi and traditional semi is less than 3,000 lbs. As shown in the chart illustrating the distribution of trips by weight, the battery would impose a limitation only on trucks weighing greater than 77,000lbs, which comprise less than 7% of trips.

Range is another risk frequently cited in forecasts for both passenger EVs and long-haul EV Semis. To date, many analyses have concluded that EV Semis will not gain traction in the absence of a 400-mile+ range. In our view, because most truckers stop every two to four hours to stretch their legs, use the bathroom, or check on their loads, such an assumption seems off base. Because these frequent stops typically last a few minutes, an EV Semi simply needs to be able to recharge quickly.

With a supercharging network in place, EV Semis would be able to operate efficiently at a range of roughly 200 miles with an average weight load.[2] The supercharging implementation could be an extension of Musk’s comment regarding the use of Model 3 components in the truck. Much like SpaceX created the Falcon 9 rocket with nine Falcon 1 rockets, Tesla could combine four or five Model 3 drivetrains and produce a fast-charging EV semi. As shown in his tweet below, Musk says that the next generation of superchargers could provide much more than 350 kW of power. While a 350 kWh battery would take roughly an hour to charge, four or five Model 3 batteries could be charged simultaneously in ~15-20 minutes.

A supercharging network could offer EV Semis unlimited range without the extra weight of a bigger or spare battery. In addition, given the traffic density of most trucking corridors as shown below, the infrastructure could be built out efficiently while accommodating the majority of demand. 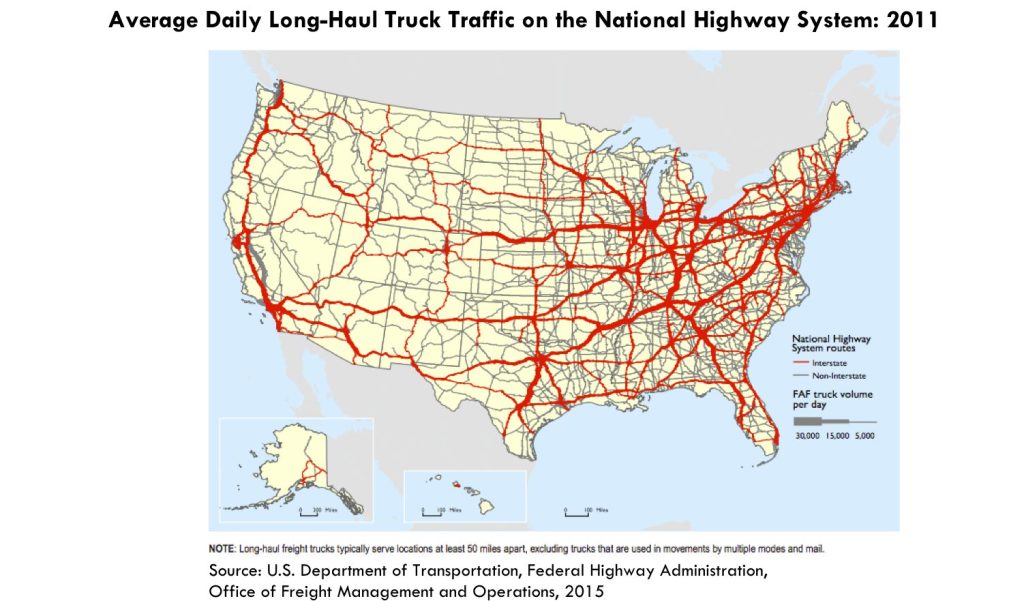 An EV Semi has the potential to lower the total cost of ownership without sacrificing the performance of a traditional semi-truck. Indeed, according to our research, EV Semis could reduce the cost per ton mile by roughly 18%, as shown in the chart below, without taking into account other performance enhancements like autonomous driving that Tesla is likely to incorporate. ARK’s research shows that with lower labor costs and higher truck utilization, an autonomous EV Semi could reduce the cost of shipping substantially.

ARK anticipates that EV Semis with autonomous capabilities could drop the shipping costs to less than 3 cents per ton-mile, with much of the savings accruing to consumers via lower cost e-commerce offerings and faster deliveries. From Tesla’s perspective, the commercial prospects could prove quite compelling, as the North American addressable ton-mile market today is roughly $200 billion per year. At $0.03 per ton-mile, the market would shrink by more than half, but at such a low price point trucking could take ton-mile share from rail. Moreover, leveraging the Model 3’s infrastructure to build a number of different vehicles in the same factory provides Tesla with a competitive advantage.

To learn more about EVs and EV Semis, please download ARK’s white paper: The Future of Autos and Trucks is Electric.