According to a recent Oxford University study, automation will eliminate more than eight million American jobs by 2025. Astoundingly, during the next decade through 2035, the number of displaced workers will rise more than nine-fold to approximately 75 million.[1] For perspective, the current civilian US labor force is 156 million.

While robots will take jobs, they also will create them. Jeff Burnstein, President of Robotics Industries Association (RIA), observes that since unemployment bottomed in 2010 at nearly 10%, “amidst record years for robot sales, unemployment has steadily fallen toward pre-recession levels… Automation is helping bring work back to the United States.”

As a first order effect, a boom in robot production is creating manufacturing jobs, roughly two per robot on average per year. The International Federation of Robotics reports that the robotics industry employed 180,000 workers globally in 2011, up from 150,000 in 2008.[2] Currently, ARK estimates that robotics employment has risen to roughly 210,000 globally and 26,000 in the United States. Stocks like iRobot [IRBT], Intuitive Surgical [ISRG], and Adept Technologies [ADEP] should be in an accelerated hiring mode in the next few years.

Based on ARK’s projections of robot adoption, if historical hiring trends hold, the US robotics industry will employ nearly two million workers in 2025, and nearly five million in 2035, as shown below. In other words, robot related employment gains alone will offset roughly a quarter of the eight million automation related job losses by 2025. 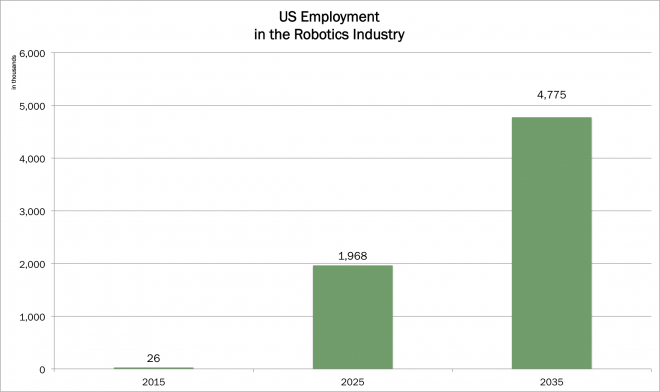 As a second order effect, new workers will assist in the design, production, sale, and distribution of industrial and professional robots. Automation will also enable the development of more affordable and higher quality products and services, supporting innovation across many sectors of the economy.

In the first half of 2014, a record 14,000 robots valued at $788 million sold in North America. Unit growth was 30%, and revenue growth 16% as prices declined at a double digit rate. Clearly, the price elasticity of demand associated with this general purpose technology platform is turbo charging unit growth.

Tags: Agriculture, Automation
See More
See all articles
You are leaving ark-invest.com
By clicking below you acknowledge that you are navigating away from ark-invest.com and will be connected to ark-funds.com ARK Investment Management LLC manages both web domains. Please take note of ARK’s privacy policy, terms of use, and disclosures that may vary between sites.
PROCEED