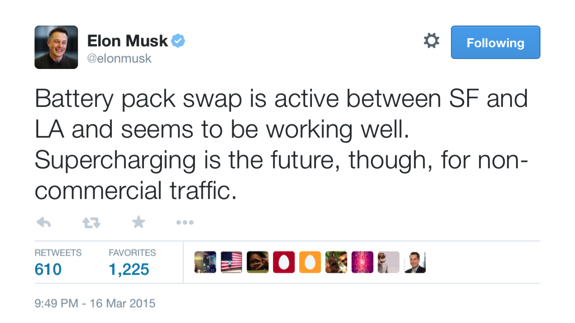 A battery pack swap typically takes three minutes, which is quicker than a 20 minute supercharge, and comparable to the amount of time it takes to fill a gasoline powered car.[2]

however, it also is much more expensive.[3] 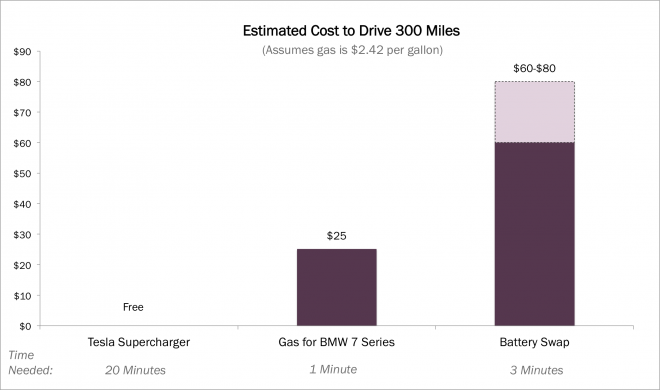 An $80 charge does not cover Tesla’s cost. If battery swapping were an option at every supercharger station today, and if two percent of Tesla drivers [4] value their time enough to pay $80 per swap, saving the 17 minutes that a free supercharge would take, then each station would service only one swap customer per week. At this rate, it would cost about $3,722 per swap,[5] as shown below, and Tesla would lose roughly $3,600 per swap. 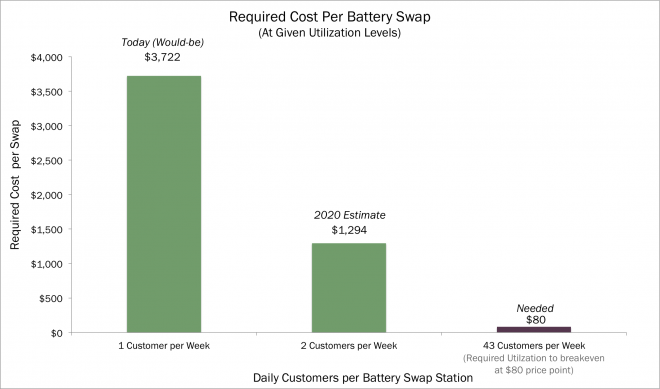 Realistically, battery swap costs will not decline significantly during the next five years, making the investment case difficult in the short run. As shown above, by 2020 the utilization of the battery swap stations could increase to about two swaps per station per week as Tesla’s installed base increases,[6] pushing the cost of the swap to roughly $1,300, still too expensive to make a profit.

California recently changed ZEV credit standards, specifying that cars must have long drive ranges and be able to charge in 15 minutes or less to qualify for ZEVs. At 20 minutes+, supercharger times fall outside this bound, while battery swaps only take three minutes. More important, ZEV credits are worth $3,000-4,000 when sold to other automakers.