Digitization is unlocking voluminous amounts of data in every industry around the world. Businesses and individuals now are creating 2.5 quintillion bytes of data daily and, during the past five years, have generated 90% of all of the data ever recorded in human history, as shown below.[1] Data aggregators like Facebook [FB], Tencent [TCEHY], and Google [GOOG] have been prime beneficiaries, using data to both increase user engagement on their platforms and maximize the value of their advertising.

In the hunt for high-volume and high-value datasets, data-exploiting companies have been in hot pursuit of the mobile payments opportunity. Mobile transaction platforms that enable peer-to-peer payments, micro-transactions, and sharing economy services have gained significant traction during the past few years and now facilitate more than $9 trillion in annual transactions, most of which are in Asia. While the ramp in transaction volumes has made headlines, the value of the data generated as a byproduct of those transactions does not seem to be well understood.  Data is becoming a valuable asset!

Turning financial data into an asset is an early stage opportunity. On a global basis, more than 80% of transactions still occur in cash.  Indeed, companies and, at some point, consumers have yet to digitize more than 1.4 trillion transactions per year,[2] roughly equivalent to the number of Google searches per year.  At roughly $700 billion, Google’s market capitalization offers a glimpse into the value of this financial data.

Mobile payment-related data and commercial transactions are a powerful combination. Most important, they reveal what, when, and sometimes why a customer purchases a product or service, which can direct advertising and identify sales leads.  Moreover, mobile payments platforms can collapse the time between advertising and purchases, providing instant gratification for all parties involved.

Our research indicates that the information associated with digital cash transactions could generate approximately $100 billion of revenue per year, as shown below. 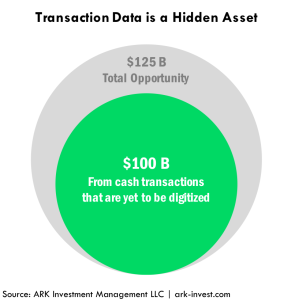 While we believe that disrupting and digitizing cash transactions represents a large “fintech” opportunity, the benefits are unlikely to accrue to the traditional financial services industry, as it lacks the requisite innovation agility, cost structure, and technical abilities to access and exploit it.  Instead, innovative technology companies like Amazon [AMZN], Google, Facebook, and Tencent that already are transforming big data into big revenue, probably will capitalize on this opportunity.

Why do we think digitizing 1.4 trillion transactions could yield $100 billion in incremental revenue?  Hyperscale web companies already are showing the way. As shown below, the revenue per interaction generated by major internet platforms is fairly comparable, despite different advertising formats, user bases, and scales. For example, Google generates $0.04 in revenue per search and Facebook, a bit more than $0.08 per user post and “like”.[3]  The monetization of mobile payments transaction data probably will end up at the higher end of the range—on the order of $0.08—as the data will be tied directly to commercial transactions. 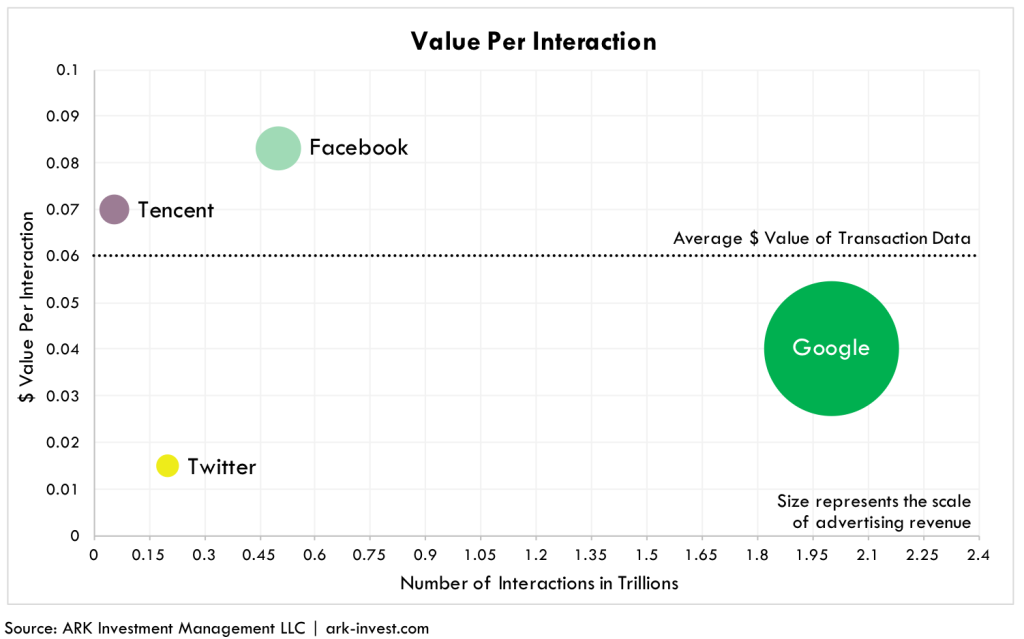 Companies with the ability to develop deep and dynamic insights into consumer purchasing behavior will be in the best position to capitalize on this $100 billion revenue opportunity. Square [SQ], Tencent, Facebook, Amazon, and Alibaba [BABA] are building the most precise consumer profiles, enabling them to offer value added services like capital loans and insurance either now or in the not-to-distant future. We believe these companies are building significant moats, or barriers to entry, with “value loops” generating more data from their consumers and building products that take increasing share in the marketplace.