Apple’s shift to ARM chips will have a much more profound impact than just lowering the cost and increasing the speed of its next MacBook. In our view, this shift marks the beginning of the end of Intel’s forty-year reign in the x86 era.

In the computer industry, victories are won with standards and scale. Intel invented the x86 standard and, by winning in the largest market of the 90s—PCs, it moved up market and eclipsed all other server CPU vendors in little more than a decade. 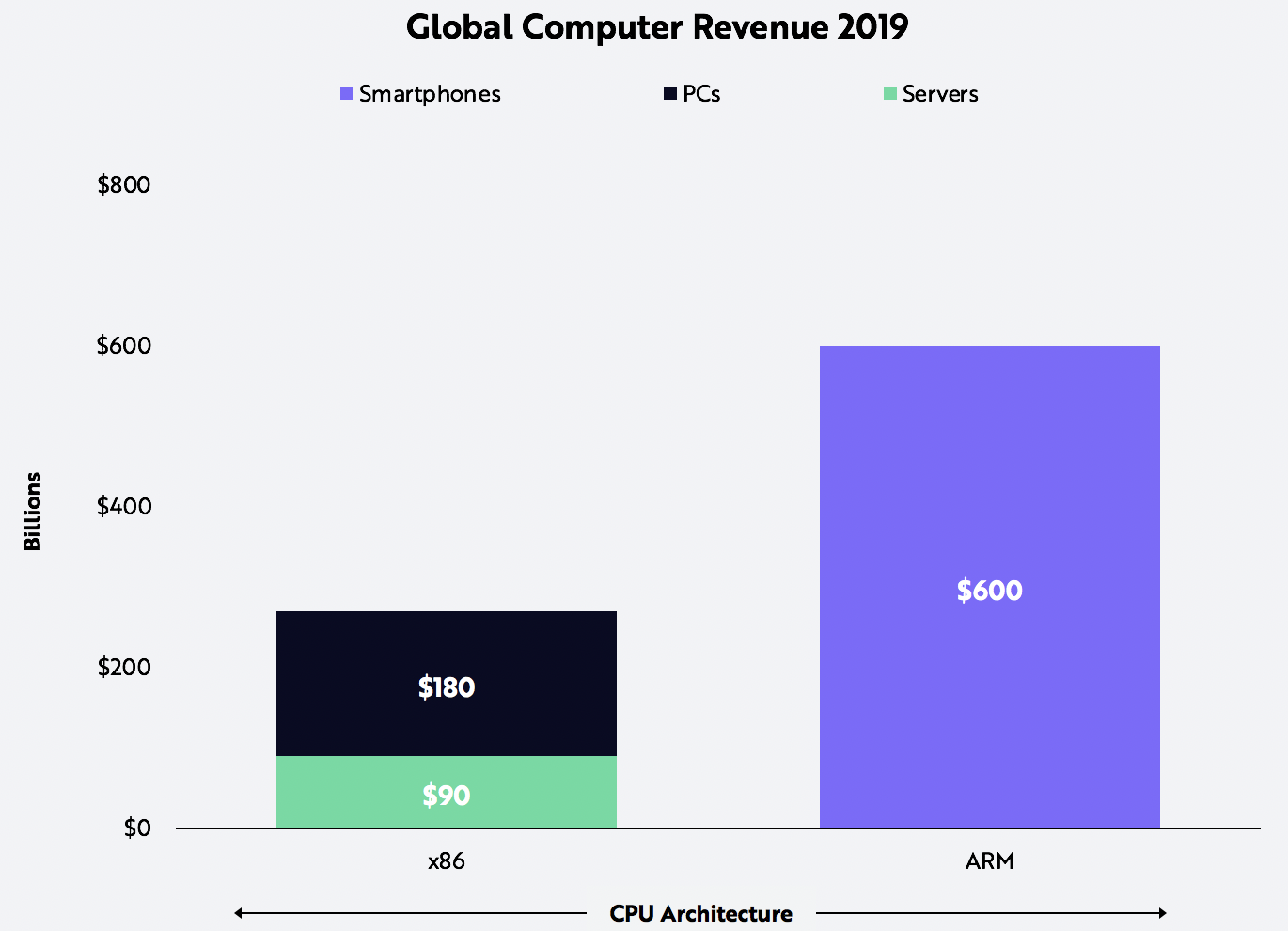 Given the combined forces of standards and scale, ARM CPUs should have displaced x86 CPUs in PCs and servers, but they did not. Why not? In a word—developers. We believe that developers are the third force influencing the platforms that win or lose. Apps are written for phones, not ON phones, whereas developers write code on x86 PCs or x86 servers in the cloud. Until recently, x86 had a lock on developers.

Many companies have tried building ARM servers, without success. Why? Linus Torvalds offers a simple explanation: developers want the cloud to run the same code as their laptops. Because developers typically code on x86 laptops, they want to deploy on x86 servers in the cloud. If Linus is right, then the catalyst for the rest of the computer market to shift to ARM could be a credible ARM-based laptop for developers.

Several reports suggest that Apple will ship an ARM-based MacBook in 2021. Interesting and important, while its market share in the PC space is only 8%, Apple’s share of software developers globally is four times higher at 29%, as shown below. As a result, Apple’s shift to ARM could attract a large and highly influential developer base. With laptops running ARM, developers likely will default to ARM in the cloud. 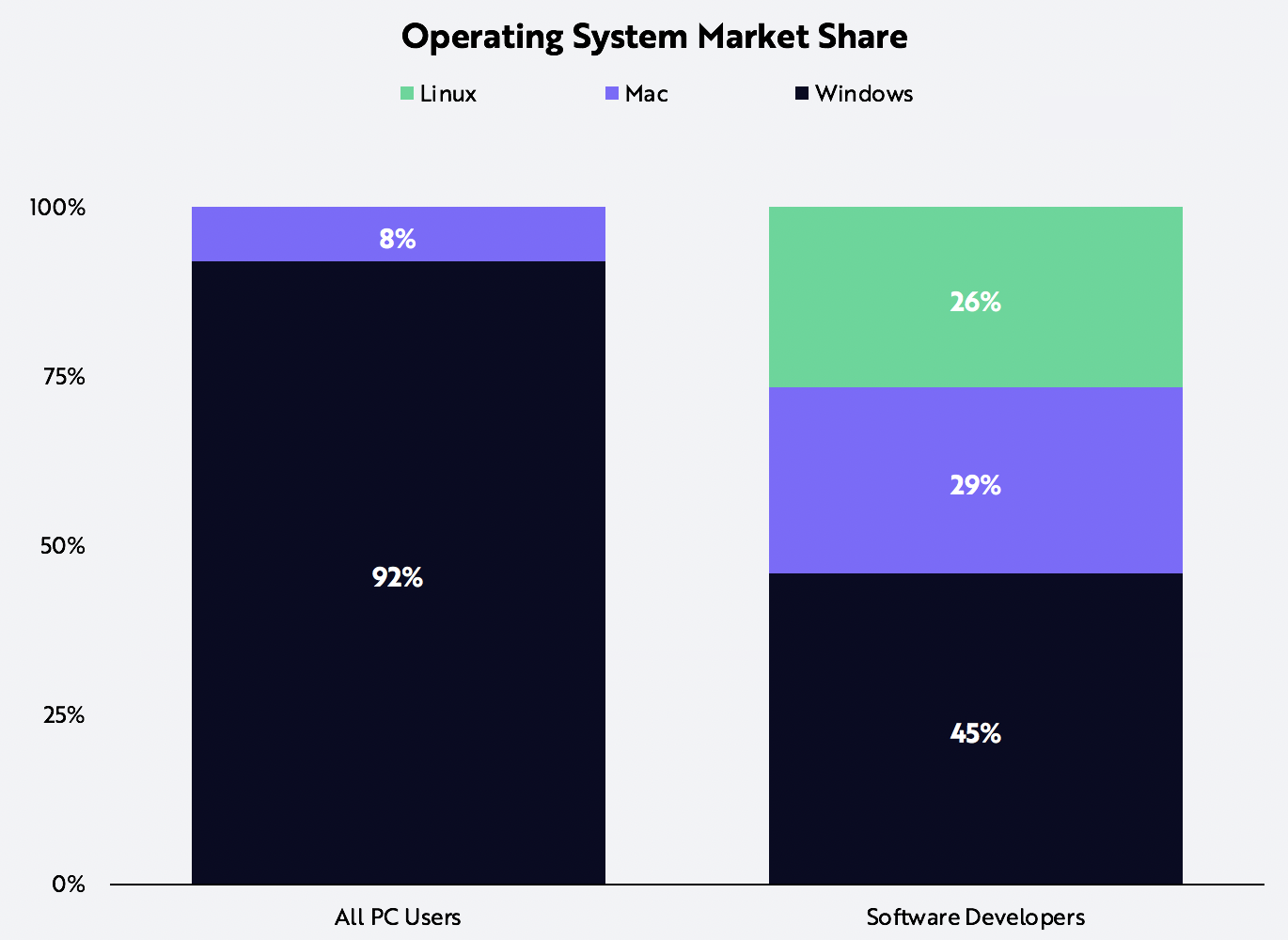 While Apple will be a powerful catalyst, chip and cloud companies also will have to participate if ARM is to take root in the data center. In the past, such competition has failed given Intel’s lead in manufacturing and its powerful grip over a fragmented customer base.

Thanks to Taiwan Semiconductor Manufacturing Company (TSMC), the competitive dynamic today is much different. Since 2018, TSMC has taken the manufacturing lead away from Intel, beating it to market with 10nm and 7nm processes and giving companies like Advanced Micro Devices (AMD) and Nvidia an opportunity to build chips with transistors that are smaller and more power-efficient than those from Intel. As a result, in this year alone, Intel is likely to lose 10% share in the CPU server market, its most profitable product line, to AMD!

In the past decade, cloud computing has shifted the balance of power from hardware vendors to cloud service providers. Traditionally, Intel has dictated the price and volume of its chips to computer makers like Dell that lacked the scale and expertise to design their own processors. Today, cloud companies are enormous in size and clout, not to mention more technically savvy. As a result, Amazon Web Services (AWS), Google, and Microsoft are building custom chips and, in turn, reducing costs, differentiating their platforms, and disintermediating Intel.

Built on TSMC’s 7nm manufacturing process, Amazon’s Graviton 2 ARM CPU became generally available in May 2020. AnandTech, a technology website not known for hyperbole, found that it offered almost twice the price-performance of Intel’s and AMD’s x86 CPUs, as shown below, and called the results “an x86 Massacre.” 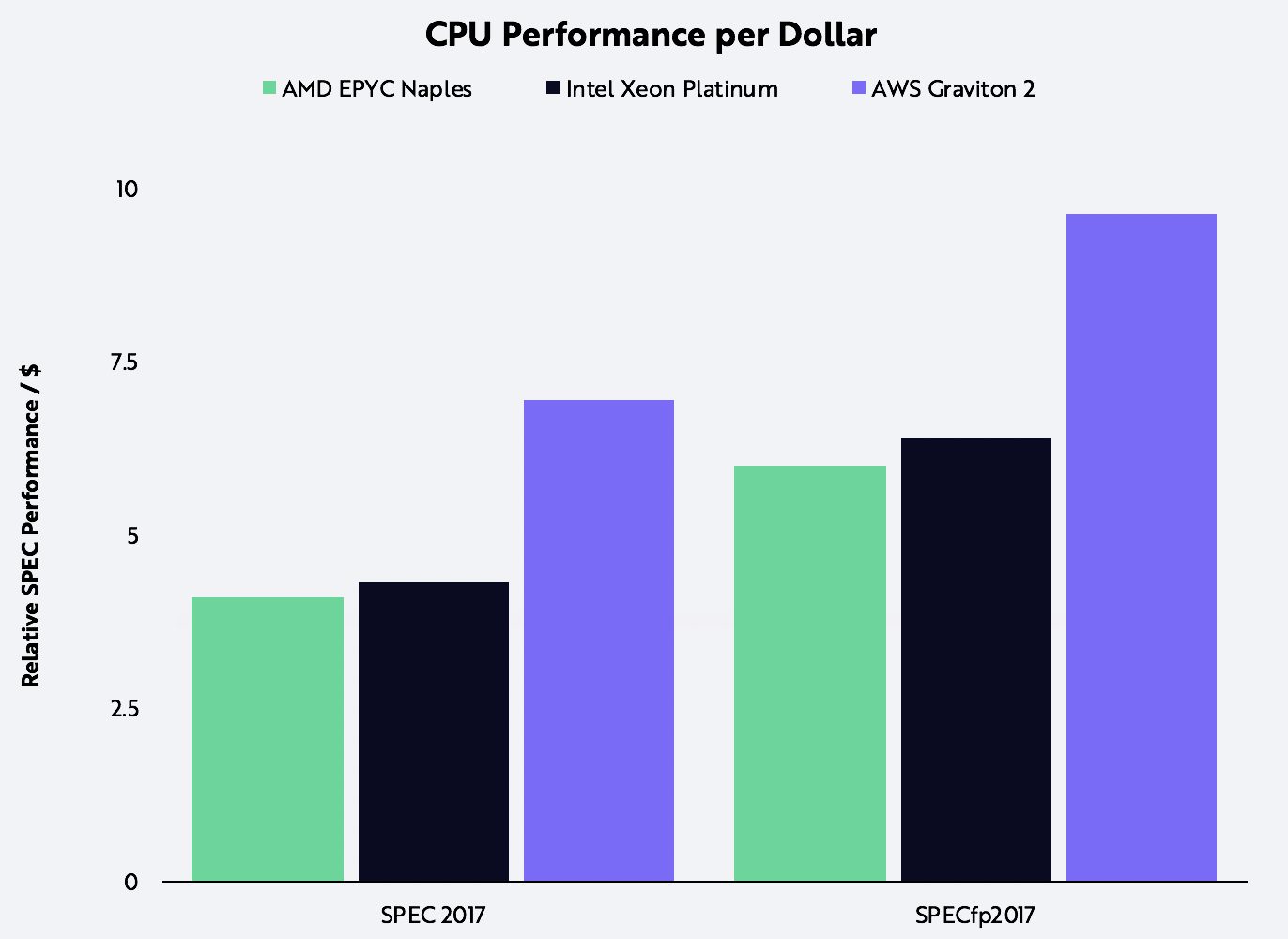 We believe that Intel should be worried, perhaps mortally, that Amazon is building its own ARM CPU. While it does rent servers, AWS increasingly is an operating system and a developer platform. Intel’s Developer Forum drew 6,000 attendees before it shut down in 2017, while Amazon’s AWS Reinvent Conference now attracts more than 60,000 people each year. CPU platforms have given way to the cloud, a much larger opportunity.

After decades of spectacular success in winning over developers, Intel’s x86 platform now risks losing them. Apple and Amazon control roughly a third of PC and cloud developers, respectively. Both are re-platforming to ARM, potentially signaling the beginning of the end for x86.