During the past decade, technology breakthroughs enabling the modification of complex genomes have changed the primary goal of research in biotechnology and synthetic biology: now research is focused not on “treatment” of diseases but on its modification and cure.  The ability to directly edit living cells has brought gene therapy and precision medicine into a new era, one that will accelerate the pace of scientific research and increase the value of molecular diagnostic tests.

Less well-publicized, other genome-editing solutions do exist, including TALENs (Transcription Activator-Like Nucleases) and its more expensive and complex predecessor, Zinc Finger Nucleases (ZFNs). While CRISPR is much cheaper, other nuances complicate the choice between using CRISPR or TALENs for genome-editing.

Because the science is evolving rapidly, ARK believes that both CRISPR and TALENs will play important roles in gene therapy and disease-modification. This blog will explore the promises of and differences between CRISPR and TALENs.

CRISPR has captured the research community’s attention, primarily because it is more cost-effective than TALENs and other genome-editing solutions.  As shown in Figure 1, CRISPR is 3-6 fold cheaper per reaction than its TALENs alternative. 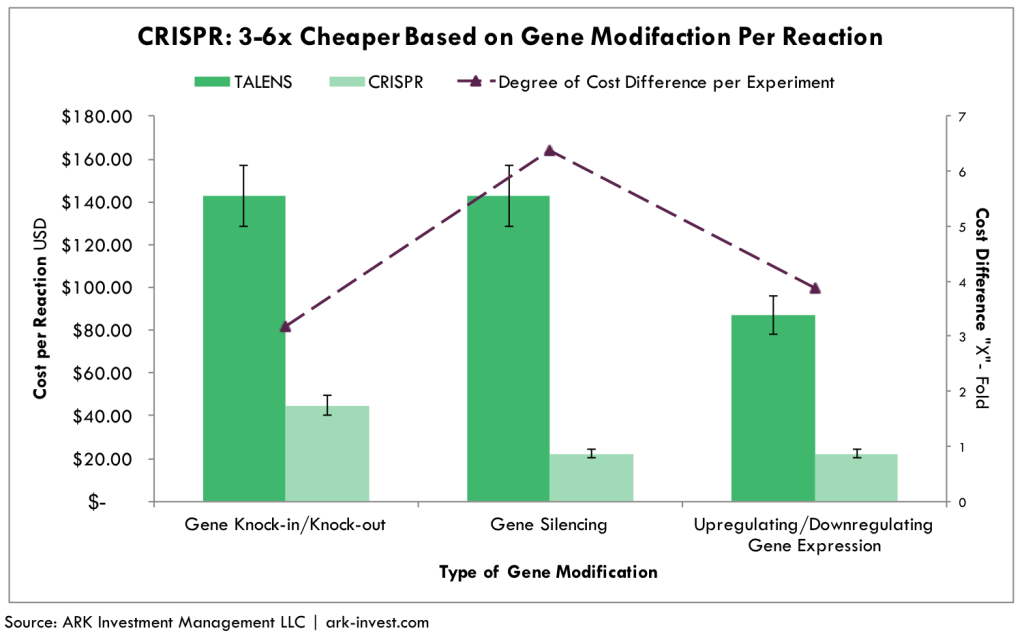 Note for Figure 1: Cost per reaction using CRISPR vs. TALENs is largely dependent on the type of gene modification required. The cost per reaction excludes transfection inefficiencies, assumes an assay protocol which requires 1μg of nuclease per reaction, cleavage detection, and is based on Thermo-Fisher prices. TALENs are more cost-effective when utilized for gene-silencing as opposed to knocking-in/knocking-out a gene because it only requires one TALEN as opposed to one pair. CRISPR is more cost-effective than TALENS across the board.

While CRISPR is a cheaper genome-editing solution than TALENs, the current state of the technology has two primary drawbacks:

That said, the effectiveness of gene-editing will be a function of scientists’ ability to target cells, giving CRISPR a competitive advantage relative to TALENs which are larger. Figure 2 provides an overview of key characteristics for three gene-editing systems. 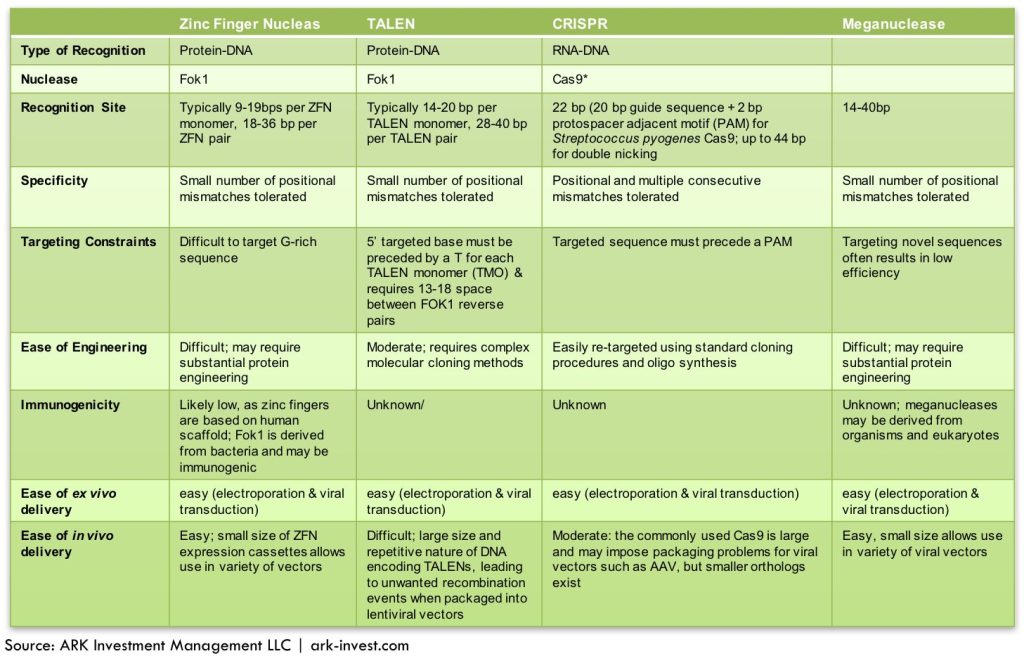 Note for Figure 2: There are several key differences among gene-editing techniques that must be considered.

Gene-editing could cure the ~10,000 monogenic diseases attributed to genetic mutations, 95% of which go untreated today.  While CRISPR offers clear cost advantages relative to competitive technologies, it entered human trials for the first time only at the end of 2016 and has a specificity disadvantage relative to TALENs. Deployed for the first time in 2015, TALENs technology is not much more advanced.  That said, both CRISPR and TALENs gene-editing technology are likely to shift the objective of health care from treatment toward cures.

Cover image: Uploaded by University of Michigan School for Environment and Sustainability is licensed under CC BY 2.0