Over the past year, the 3D printing industry has undergone a dramatic transformation. ARK’s research shows that, while printer manufacturer earnings were hard hit in 2015, the companies have begun to restructure, shifting priorities to industrial applications. More competition has emerged from both traditional inkjet veterans and startups, and the consumer printer market has become more commoditized. Despite this turbulence in the market, the long term growth story remains unchanged. Revenues in the 3D printing market, now roughly $5 billion, should approach $40B by 2020.

In 2015, shares of Stratasys [SSYS] and 3D Systems [DDD], the two market share leaders, collapsed, ending the year down roughly 80% and 70%, respectively, from their highs in 2013. We think that the market was overhyped by the “vision” of a 3D printer in every home and on every desk. Making matters worse was the downturn in U.S. production that was caused by a 25% appreciation in the U.S. dollar and China’s industrial recession.[1]

That said, the 3D printing industry is nascent and has penetrated less than 1% of the $500B+ total addressable market. ARK’s research shows that the number of companies that have mentioned 3D printing on earnings conference calls is at an all time high, an indicator of the technology’s growing relevance. Interestingly, as shown on the chart below, the number of mentions stalled during the peak of hype in 2013, but now seem to be breaking out again. 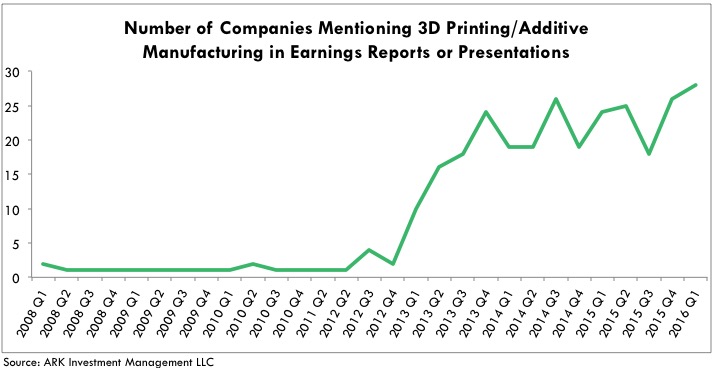 Further, the number of unique companies mentioning 3D printing has been increasing across all stages of the value chain, as shown below. 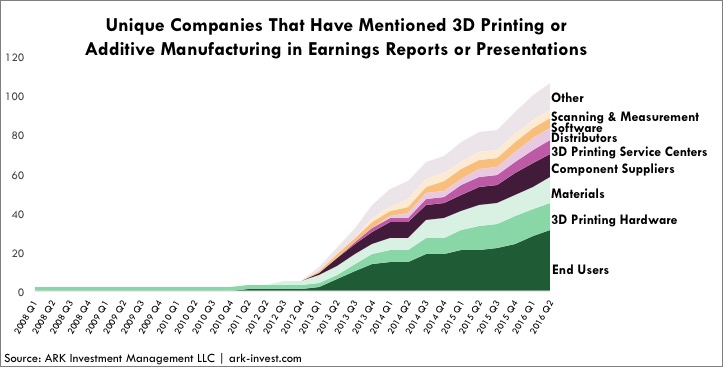 Most notably, current and potential end users of 3D printing is the largest category of firms that have mentioned the technology. End-use parts comprise both the largest addressable market for 3D printing and the least penetrated market, as shown below.

Among end-use firms, aerospace and healthcare equipment companies account for almost half of the mentions, as shown below. Both industries tend to produce low-volume, complex, high value add parts that are well-suited to 3D printing. 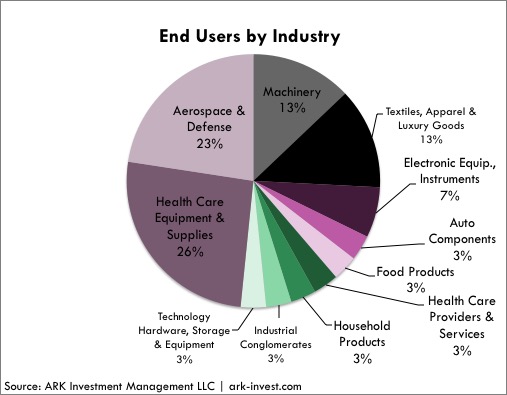 To capitalize on the end-use parts opportunity, both Stratasys and 3D Systems have refocused their efforts on these applications. Stratasys has taken write-downs of more than $1 billion and restructured its consumer printer line, Makerbot. Further, this year Stratasys announced that it will outsource all manufacturing of Makerbot machines to Jabil. Similarly, 3D Systems discontinued its consumer line of Cube printers while undergoing a management shakeup. Led by a new CEO, former HP executive Vyomesh Joshi, 3D Systems plans to evaluate its massive portfolio, most of it acquired, and probably will concentrate on a few key technologies and industries.[2]

While the 3D printing consumer space has been flooded by low cost competition, the industrial space should prove more defensible as performance-critical technologies are validated and move into complex supply chains. ARK has mapped the current competitive landscape of the industrial players in 3D printing, as well as the leaders in each technology category, in the graph below. 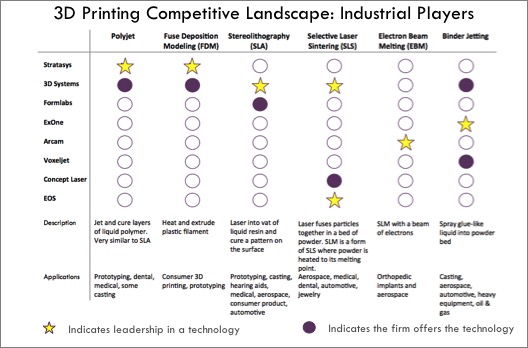 That said, HP is validating the 3D printing industry as a whole. Because of HP’s entrance, the 3D printing incumbents are continuing to innovate, improving the reliability and speed of their machines. HP’s printers will be competitively priced at $100,000 – $200,000 and multijet fusion could prove to be a viable and competitive technology.

The 3D printing industry is undergoing a dramatic transformation as competition heats up and incumbents reorganize. Recently Stratasys’ chief executive officer announced his retirement and will be replaced by another Objet alumnus. In addition, 3D Systems’ chief marketing officer and chief operating officer both stepped down. 3D Systems may see more exits as part of its restructuring plan.

The next year will offer new management teams the opportunity to prove themselves. New blood could be beneficial as now is a crucial time for printer manufacturers to refocus and reinvent. If existing players merely maintain market share, they will enjoy equity returns above 40% at a compound annual growth during the next five years.[4] 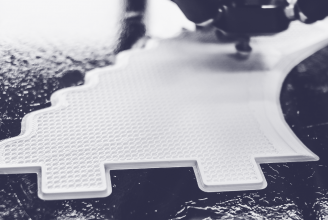 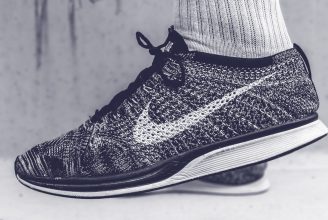 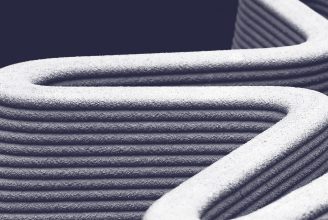 Tags: 3D Printing, Additive Manufacturing, Manufacturing
See More
See all articles
You are leaving ark-invest.com
By clicking below you acknowledge that you are navigating away from ark-invest.com and will be connected to ark-funds.com ARK Investment Management LLC manages both web domains. Please take note of ARK’s privacy policy, terms of use, and disclosures that may vary between sites.
PROCEED