Molecular Diagnostic Tests Could Be a Lifesaver for Colorectal Cancer Patients

A molecular diagnostic test for colorectal cancer could lower the age at which testing makes economic sense, an important consideration for a disease increasingly prevalent in younger people. As ARK has documented previously, early diagnosis could have a more profound impact on cancer care than could any of the promising next-generation treatments in the pipeline.

As illustrated below, early diagnosis of colorectal cancer is the key variable determining survival rates: 90% of patients diagnosed when the cancer is localized will live at least five years, compared to roughly 10% after it has metastasized, as shown below. Despite these grim statistics, more than 40% of US adults eligible for colonoscopies do not comply with guidelines for any number of reasons: the tests are invasive and uncomfortable, somewhat risky, and relatively expensive.[1] 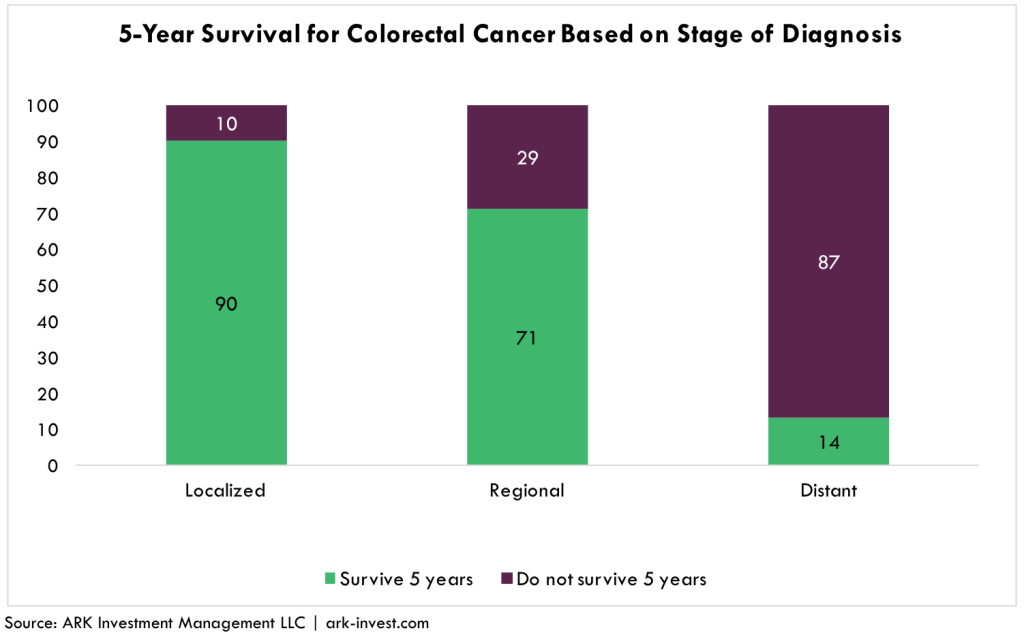 Thanks to research breakthroughs in 2014, biomarkers [2] for colorectal cancer could hold the key to non-invasive testing and diagnosis. Companies focused on commercializing them include VolitionRx [VNRX], DNAlytics and Exact Sciences [EXAS]. While VolitionRx and DNAlytics sample blood for nucleosomic markers and mRNA monocyte markers, respectively, Exact Sciences’ Cologuard test samples the stool,[3] all with increasing precision over time. Thanks to improvements in DNA sequencing technology, these tests should benefit from a declining cost curve, unlike their traditional endoscopic counterparts.

Minimally invasive, molecular diagnostic tests are likely to add significantly to the life spans of colorectal cancer patients. According to ARK’s research models and as illustrated below, among the 18 most common cancer types colorectal cancer would be one of the top three beneficiaries of early diagnosis as measured by aggregate life-years-saved, and top two as measured by costs saved.[4] On its current trajectory, the cost to treat later stage colorectal cancer will top $17 billion per year by 2020. Diagnosing and treating it in Stage I or Stage II, however, costs roughly $16,000 per patient per year, roughly a quarter of the $70,000 cost per year in Stage IV. 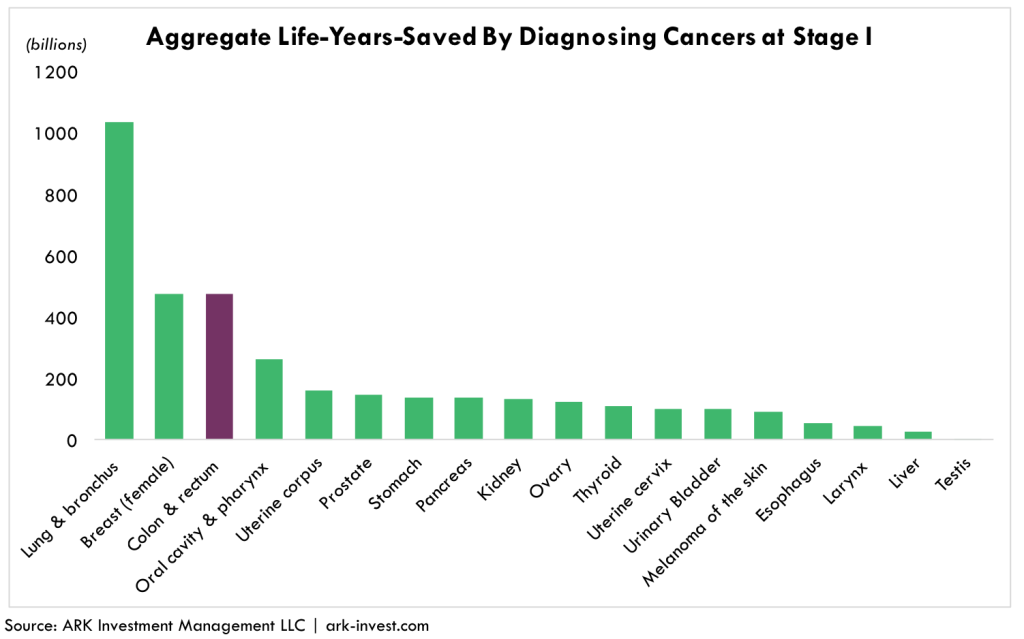 If early diagnosis is so essential, then why don’t doctors test patients during routine physical exams? The reason revolves around “prevalence”:  the most important determinant of a test’s value is the likelihood that a patient has the disease. A 10-year-old child, for example, is highly unlikely to have colorectal cancer. A test makes sense only if the costs saved and benefits gained outweigh the costs and risks of the test itself. Consequently, administering the test would be a waste of money, even more so in the case of a false positive.

In addition to prevalence, five other factors can influence the value of a test. Listed here are the factors and their definitions:

As shown in the graph below, with the obvious exception of prevalence, a 1% change in each of the factors changes the value of the molecular diagnosis for colorectal cancer tests by only $5-$15. By contrast, a percentage point change in prevalence causes an order-of-magnitude, or $1615, increase in the value of the test. 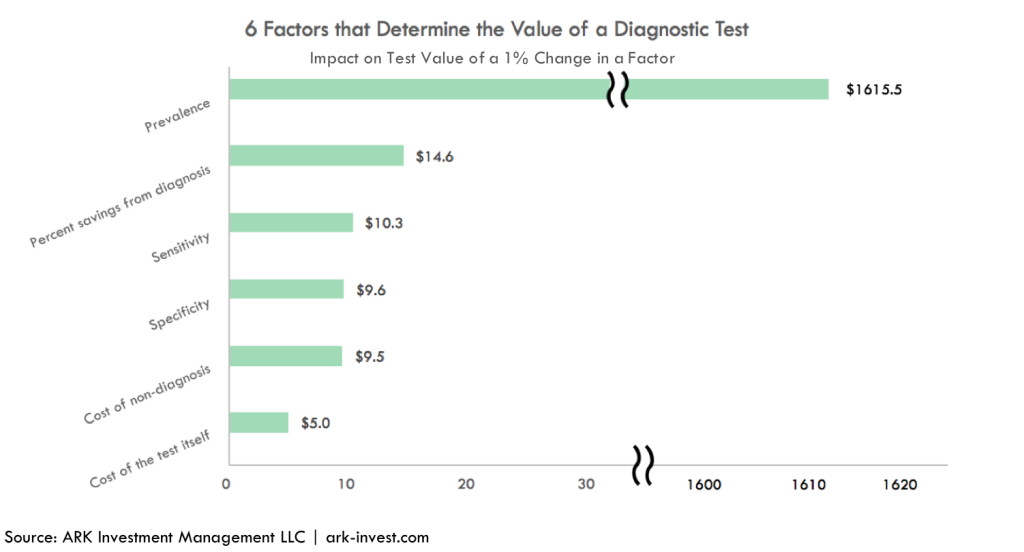 The importance of prevalence means that the value of a colorectal cancer diagnostic test increases dramatically as a patient ages. As can be seen below, the value of a colorectal diagnostic test to a 60-year-old male is 10-fold that of a 40-year-old male. Unless it were to drop toward $100, the cost of an annual test probably would not be reimbursed for individuals 40 or younger. 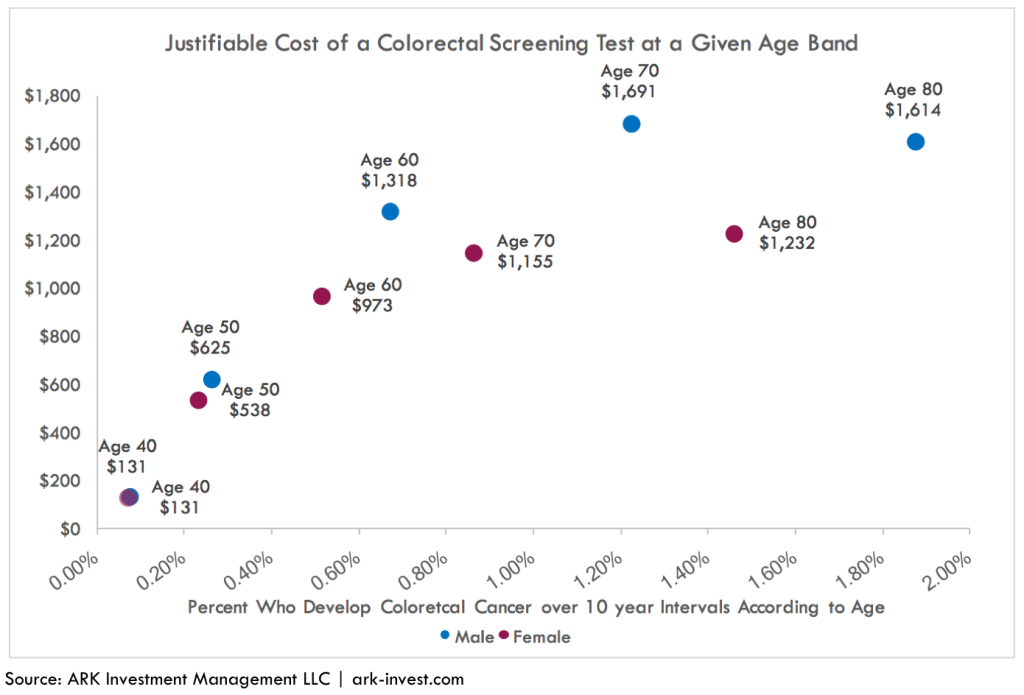 With time, as the cost of molecular diagnostic tests declines in line with that for DNA sequencing, younger cohorts should seek and get annual colorectal tests. According to a SEER study from 1998 to 2011, 15% of patients with colorectal cancer were below the age of 50 years.[5] More recent research suggests that the difference in prevalence between older and younger individuals is shrinking.  As illustrated in the chart below, in the 25 to 30 years through 2013, the incidence of colorectal cancer has increased for adults in the 20-39 age range and decreased in the 55+ cohort. The declining cost curve of the molecular diagnostic tests cannot happen fast enough to allow annual testing for young cancer victims. 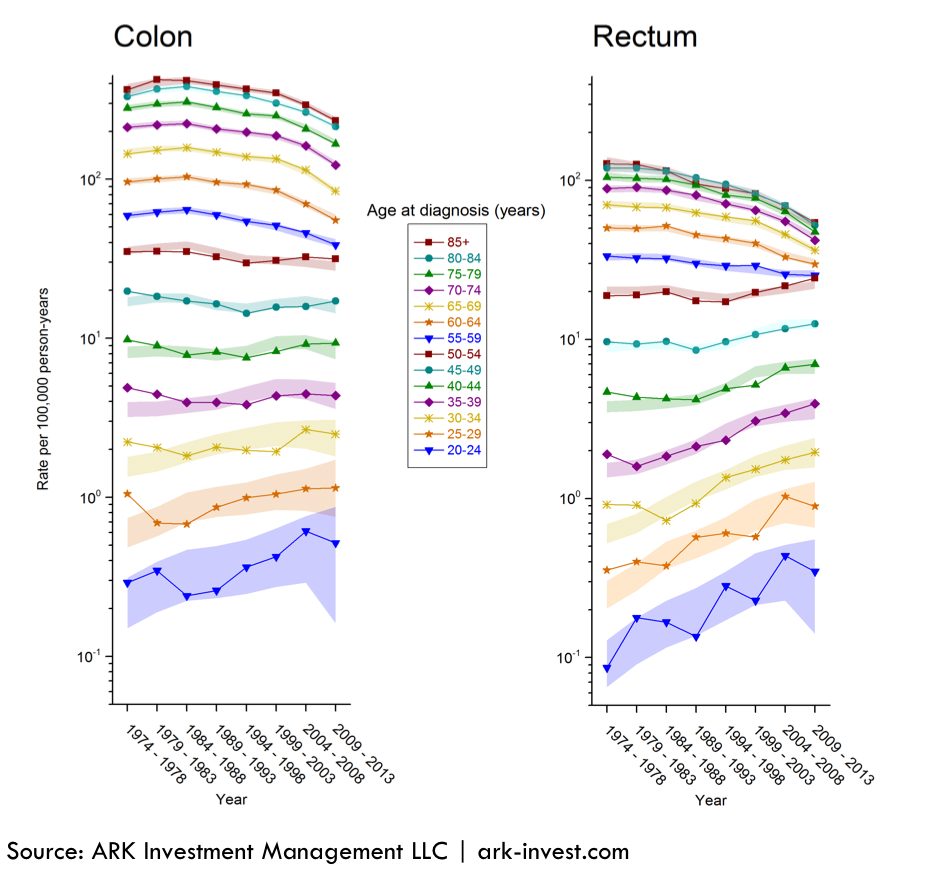 Longer run, a molecular pan-cancer screening test, guiding physicians and oncologists to more-targeted cancer diagnostics, should become routine. Then, perhaps, when coupled with immunotherapy and other next generation therapeutics, these diagnostics will transform the diagnosis of cancer from a death sentence to a chronic disease.