Amid a global epidemic, the Food and Drug Administration (FDA) has issued new guidelines for blood banks to prevent the contamination and transmission of the Zika virus. While whole blood donations are banned in Zika-endemic parts of the world, Cerus [CERS] INTERCEPT would enable the safe collection and transfusion of plasma and platelets. Two years after its initial FDA approval, INTERCEPT continues to be the only FDA approved blood transfusion pathogen-inactivation device for combating yet another declared Global Health Emergency.

The National Institutes of Health (NIH) has likened the speed of transmission and the lack of scientific knowledge about the Zika virus to the 1980’s HIV/AIDS pandemic. To date, the Center for Disease Control (CDC) has reported 82 Zika-positive cases in the U.S. and roughly 1.5 million globally, while the World Health Organization (WHO) predicts 4 million by year end, as shown in the chart below. A recent UN Report indicates that an increase in global temperatures may increase the incidence of many vector-borne diseases, including the Zika virus, during the next few years (Fig 1). 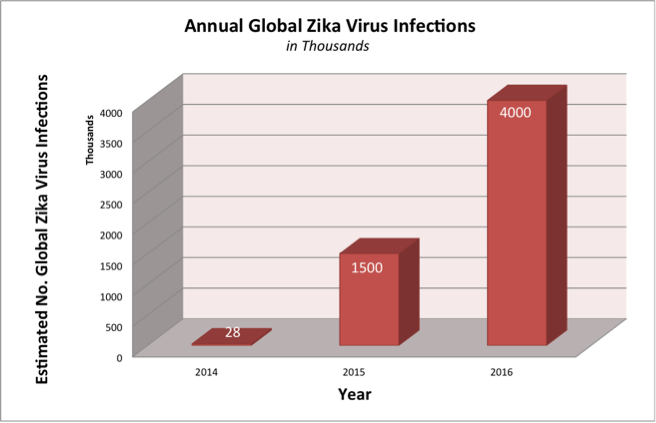 Source: ARK Investment Management LLC (Fig.1 Projections based on NIH & CDC reports. The 2014 figures are based on the 2013-2014 French Polynesia outbreak.

While only 20% of individuals infected with the Zika virus become ill, it has been linked to a serious birth defect, microcephaly, and a rare autoimmune disease, Guillain-Barré syndrome. Brazil has witnessed well over a 32-fold increase in microcephaly incident reports in 2015 compared to prior years. The uptick in microcephaly diagnoses is aligned with initial government investigations linking ~38% of infants born with the defect back to the Zika virus.

In 2015, Cerus announced that it could deactivate the Zika virus in human blood, thereby enhancing transfusion safety. Based on ARK’s research, thus far Cerus has the only devise on the market that will prevent the transmission of the Zika virus through blood transfusions.

Cerus’ approach is one of many that will help slow disease transmission rates. The WHO indicated that a diagnostic test for the Zika virus may become available within weeks and that 20 biotech companies are racing to the finish line. While short-term Zika virus response relies on improved detection and containment methods– much like that offered by the Cerus INTERCEPT system — mobilization efforts to release an approved vaccine against the virus have also taken off.

While some companies are developing diagnostic tests and vaccines, others are attacking the issue at the genetic level in mosquitoes. Brazil has partnered with the International Atomic Energy Agency and is planning on sterilizing male mosquitoes using gamma ray irradiation, but the necessary government authorities have yet to issue an import permit for the irradiator.

The WHO also projects that a viable vaccine against the Zika virus will not be available commercially for at least another few years, but several companies have announced their commitment to the effort, including Texas-based NewLink Genomics [NLNK] which previously collaborated with international agencies on the successful release of an Ebola vaccine. Other top contenders for a viable vaccine include Intrexon [XON] and Inovio Pharmaceuticals [INO]. Inovio CEO, Joseph Kim, announced an aggressive timeline to initiate Phase 1 testing of its Zika vaccine before the end of 2016.

In a world of rapid globalization, increased travel and rising temperatures, once geographically limited esoteric diseases, like the Zika virus, now pose an international health threat. ARK believes that the clear takeaway from this episode, and Ebola before it, is the demonstrable value of systems and solutions that prevent and/or reduce the transmission rate of such diseases.