Netflix’s Distribution And Interconnections: What Are The Economics Today?

How does Netflix’s [NFLX] streaming distribution work? The internet is a network of interconnected networks, each operated by a different entity. Interconnections between networks are potential bottlenecks because upgrades require agreements among the counterparties. Typically, investment in the gateways lags investment in the individual networks. As a result, traffic flowing from one network to another, crossing multiple interconnects to its destination, can face significant delays. 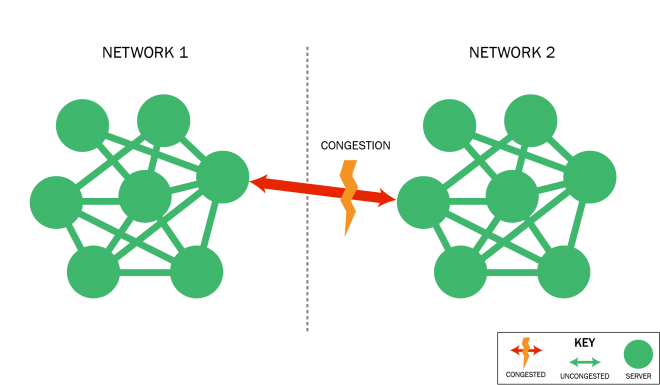 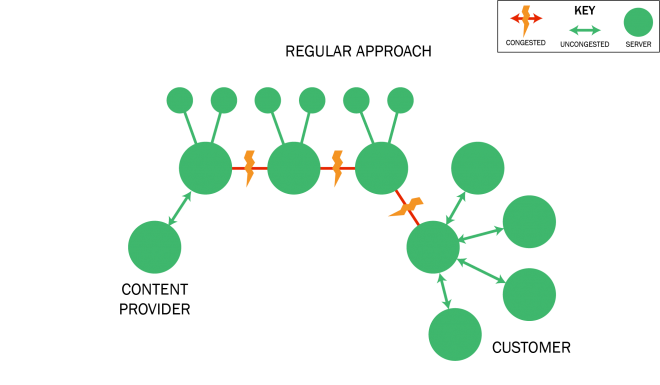 Now imagine that gigabytes instead of people were to occupy the rooms to get a sense of the challenge that Netflix faces. Netflix accounts for 35% of the total internet traffic volume, 20% more than second highest volume producer, YouTube [GOOG]. It sends data across multiple internet service providers (ISPs) in order to reach viewers. To deliver information quickly, Netflix has depended upon Akami [AKAM] to act as a trusted intermediary, caching and then serving its most popular programs on-demand. These content delivery networks (CDNs) are servers on the edges of the network, as shown below. As Akamai’s CEO explains, “the worst place in the world to serve your content from is a data center.”

Companies such as Netflix [NFLX], Amazon [AMZN], and Apple [AAPL] are large enough to deploy their own CDNs instead of relying solely on third party services. Simultaneously, they enter into negotiations with ISPs for direct interconnections between their networks, meaning direct access via an exclusive route, bypassing intermediary networks and ISPs. Direct interconnections provide faster service, and also reduce congestion in general, as the company’s data no longer clogs regular routes, as shown below. By directly interconnecting with ISPs, Netflix bypasses commercial CDNs to reach the edge of the network. 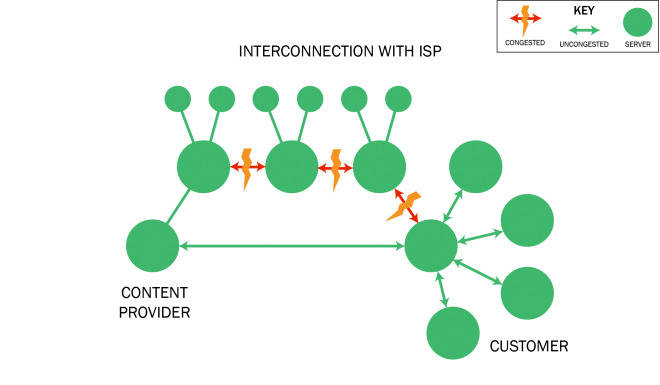 When ISPs do not allow peering and do not allow caching inside their networks, Netflix can negotiate paid interconnection deals with them to avoid paying for commercial CDNs. While Open Connect caches sit inside some ISP last miles, others want to reduce the transit costs they would have to buy. For now, Netflix could commercially reserve sufficient capacity for its traffic via direct interconnections for $80 million per year at publicly available rates, or roughly $0.12 per customer per month.[1] It most likely pays a lower average price, due to its size and market power. However, when ultra high definition ‘4K’ content proliferates, it will require five times the bandwidth and, in the absence of CDNs, another layer of infrastructure costs and interconnection fees. 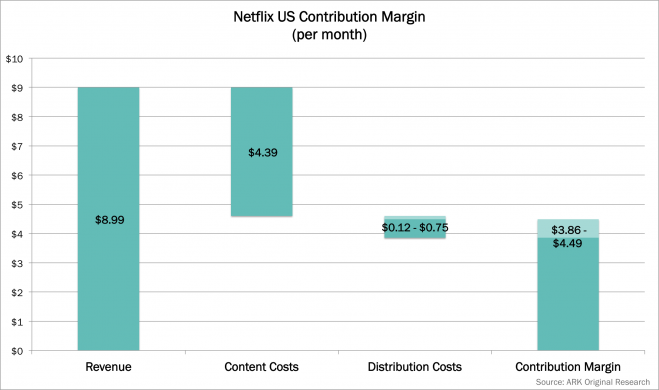 Netflix has a strong incentive to balance its distribution options between cost and quality of service and, pending legal challenges, should be a prime beneficiary of net neutrality in the future. Ultimately, who should be responsible for network congestion, and pay the attributed costs? ISPs build and own the infrastructure, while content companies generate traffic and profit from the infrastructure. Content consumers pay for both. Thus far, large ISPs have attempted to leverage their control over the end-user, imposing costs on Netflix and peers in order to generate a return on investment and continue technological improvements in their networks. The proposed merger between two of the largest ISPs, Time Warner Cable [TWC] and Comcast [CMCSA], would add to ISP concentration, if allowed. On February 26th, the Federal Communications Commission (FCC) voted in favor of net neutrality, setting the stage for years of legal wrangling.