A common but mistaken refrain is building that bitcoin’s price behavior of late has been a replica of the infamous late 2013 rise and crash. Certainly, a similar narrative could be spun: bitcoin breaks $1,000, the People’s Bank of China issues some comments that scare people, bitcoin crashes. But if a few marketplace characteristics are investigated, we think the difference in bitcoin’s maturity between then and now becomes clear.

On 5th December, 2013, a short while after bitcoin’s price broke $1,000, the People’s Bank of China (PBOC) sent out a statement claiming bitcoin was “not a currency in the real meaning of the word”. The PBOC went on to restrict financial institutions from getting further involved with the technology.

On 6th January, 2017, a short while after bitcoin’s price broke $1,000 for the second time in its eight-year life, the PBOC sent out new statements indicating that its representatives had met with major China-based bitcoin exchanges to reinforce the importance of remaining compliant with “relevant laws and regulations.” The tenor of the statements was markedly different, but let’s focus on the numbers.

Following both announcements, bitcoin’s price quickly fell below $1,000, which may be what has led to the false proclamation that bitcoin hasn’t changed a bit since 2013. We believe such a proclamation is born of ignorance around the specific market dynamics. 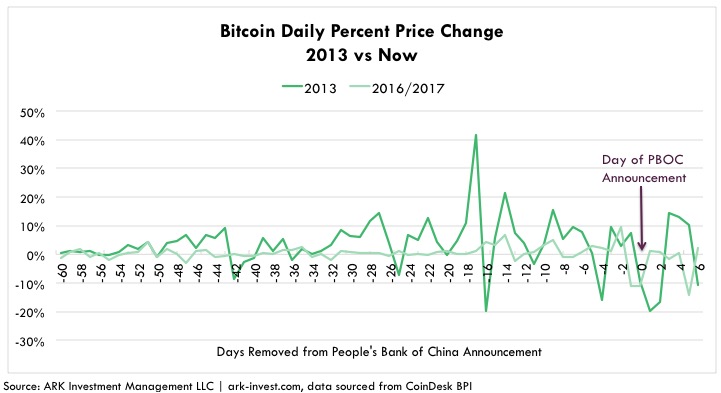 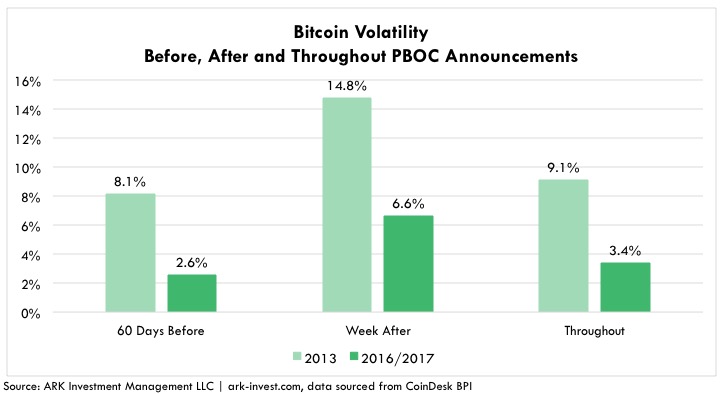 It appears, however, that some bitcoin investors are suffering PTSD. After all, the 2013 announcement precipitated a long slide in bitcoin’s price through 2014, bottoming in January 2015.

Critics have come out of the woodwork recently, many once again proclaiming bitcoin too volatile for most portfolios. However, if an investor has held Twitter, LinkedIn, Workday, Netflix, GoPro, Tableau and many more high flying tech names over the last few years, then they have endured single day drops greater than bitcoin has experienced on any day during the week following the PBOC’s 6th January, 2017 announcement.

We think bitcoin’s subdued volatility in the face of fears over China is a sign of its maturing markets. For instance, liquidity has improved considerably, with global trading volumes roughly 30x greater than they were in late 2013. Meanwhile, it appears a more informed base of investors now has the conviction to hold through the whims of nation states, picking up the slack from weak hands.

Despite the above context, bitcoin may currently not be stable enough to be a widely used currency. Its price swings are still great enough that they could cause havoc if bitcoin were a broadly used unit of account (and they do wreak havoc on other cryptocurrencies, where bitcoin is often used as the unit of account). Furthermore, changes in bitcoin’s price make it harder to use bitcoin as a means of exchange, because significant exchange rate risk can arise.

But, if bitcoin is a new asset class — as we’ve put forth in a paper authored with Coinbase — then to gain mainstream adoption it doesn’t need to behave like other assets we already know. We think it just needs to mature, and the market dynamics signal it’s doing just that.

This blog was originally published on CoinDesk and can be found here: http://www.coindesk.com/category/features/opinion/