Exploring Bitcoin As A New Asset Class 1/4
A excerpt of ARK’s white paper exploring bitcoin as the first of its kind in a new asset class—cryptocurrency—distinct from all other asset classes. In this article, we make the case that bitcoin is a significantly investable asset.

ARK Invest and Coinbase define investability as providing ample liquidity and opportunity to invest. Globally, bitcoin exchange trading volumes are a good measure of the liquidity available to investors. As shown in the graph below, these volumes have been increasing steadily, reaching roughly $1 billion per day through the first quarter of 2016.

However, the graph above suffers a shortcoming as trading activity is self-reported by exchanges and not validated by third parties. If we were to look only at bitcoin traded as a cross with the US dollar, euro and British pound—the assumption being that businesses are monitored more closely when handling these currencies—the picture is starkly different. CoinMarketCap takes a different approach toward discounting trading volume, excluding exchanges that don’t charge fees in its calculations. Daily trades made in these three currencies have been ranging between $10 to $100 million since early 2014, as shown in the graph below. For 2016, this comparison puts these three currencies at between 2-10% of global bitcoin trading volume.

As a percentage of reported bitcoin volume traded, the Chinese yuan took significant share during the explosive November 2013 price rally, and has continued to dominate (see graph below). Although over-the-counter (OTC) trading is still a small percentage of total volume generation, and not included in these graphs, itBit’s Asian OTC volume soared 300% month-over-month in March 2016.

In our opinion, traders have more opportunity and desire to interface with bitcoin as currency pairs and order types grow, regulation crystallizes, and macroeconomic uncertainty underscores its value proposition. According to data from Global Digital Asset Exchange (GDAX), the most liquid bitcoin exchange in the US, trading volume is closely connected to the number of active traders for any given month (graph below). When there are big price swings like those that occurred in late 2015, a flywheel effect reinforces volume as traders capitalize on the volatility, driving even more volume through GDAX.

As of May 6, 2016, bitcoin’s average daily liquidity for the trailing three months [1] nearly matched the SPDR Gold Shares ETF (GLD) and was three times that of the Vanguard REIT ETF (VNQ), as shown in the graph below.[2] These numbers are surprising considering bitcoin stored $7 billion in value at the time, while the GLD stored $34 billion and the VNQ stored $56 billion. In our opinion, equal or superior volume with a fraction of the assets under management underscores that bitcoin is punching significantly above its weight.

Trading is only half of the investability equation, as traders are short-term “investors,” while many retail holders are long-term oriented. Increasingly, users on Coinbase’s wallet and retail conversion service are using bitcoin strictly as an investment, or long-term store of value, as shown in the graph below. 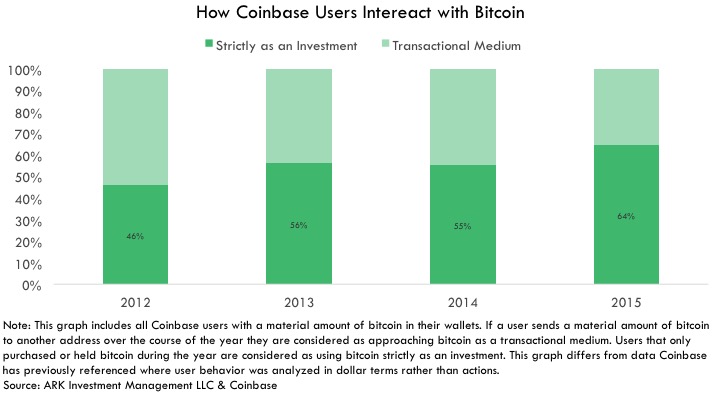 Since Coinbase stores nearly half a billion dollars of bitcoin–more than any other provider in the world–arguably it is a representative sample of the ecosystem as a whole. If we assume transactors and investors hold roughly the same amount of bitcoin in their wallets, then 60% of bitcoin worldwide—or north of $4 billion out of a $7 billion base—is strictly a store of value. While the value that bitcoin stores is non-trivial, we believe it still has enormous headroom in relation to the $100 trillion dollars stored in global capital markets.[3]

Digging deeper into the numbers, ARK and Coinbase estimate that roughly seven million people around the world hold a material amount of bitcoin. Meanwhile, over 500 million people hold stocks directly or indirectly.[4] Even a modest uptake by those who have shown a propensity to hold higher-risk assets would increase bitcoin liquidity materially. Moreover, while bitcoin is perhaps held by 1% of current equity investors, it has penetrated less than 0.1% of the global population.[5] Ultimately, it seems likely that as cryptocurrencies mature, the number of holders will expand meaningfully, providing a positive tailwind for investability within the asset class.

The question of who and how many people hold bitcoin highlights a key characteristic of bitcoin’s investability: the censorship-resistant nature of its distributed and permissionless blockchain. While exchanges need a banking relationship to convert local fiat currency into bitcoin, “mining” [6] is a mechanism by which citizens can acquire bitcoin independent of regulation or capital controls. Local currency buys the mining equipment that then generates bitcoin, which can be traded for a number of fiat currencies. As more support infrastructure is built around the network, bitcoin may become the most secure and accessible asset available to the public.

In summation, while bitcoin is not yet the most liquid or widely held asset on the worldwide market, we believe its thin market and fringe status is overstated. A surprisingly robust ecosystem has grown in the seven years since its inception, giving retail investors the tools and opportunity to drive over one billion dollars in daily liquidity. There are many companies that aim to broaden retail exposure to bitcoin, such as Lawnmower’s “Bitcoin investing, simplified” mobile app.[7] Meanwhile, an institutional infrastructure is building with products like Grayscale’s Bitcoin Investment Trust,[8] TeraExchange’s Bitcoin forwards,[9] XBT Provider’s exchange-traded notes (ETN) on Nasdaq Nordic in Stockholm,[10] and potentially exchange-traded funds (ETFs). With each month, bitcoin cements its role as a tradeable and investable asset, drawing second looks from many investors who wrote it off as fraud or fad.

“Bitcoin: Ringing The Bell For A New Asset Class”