Few innovations have generated as much controversy and potential for worldwide economic transformation as have Bitcoin and bitcoin. Bitcoin is an open source, decentralized technology platform upon which bitcoin, the digital currency, depends. On August 1, 2015 [1], the digital currency was priced at $280 per bitcoin, with 14.5 million units in circulation, $4 billion in stored value, and a nearly 90% share of global digital currency market capitalization (market cap).[2][3][4] 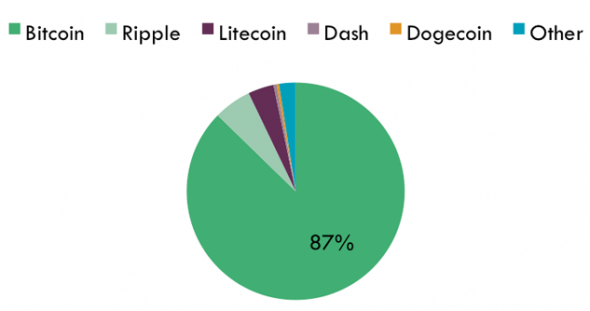 Bitcoin was birthed in the ferment of the 2008 financial crisis by Satoshi Nakamoto, a person or organization that to this day is anonymous. The antithesis of a centralized banking system, Bitcoin is decentralized and does not require a central repository or single administrator to process transactions. Instead, it relies on the cryptographic security of mathematics and the computational power of distributed computers to create a digital ledger that is transparent to the world.

bitcoin’s merit has gathered momentum as central banks around the world have capitulated to quantitative easing, bloating their balance sheets with reserves. Federal Reserve Chairman Bernanke was the first to pull out all stops in response to the financial collapse of 2008. European Central Bank President Draghi reacted to a relapse in the European sovereign debt crisis in 2011-2012 with a “whatever it takes” approach. Governor Kuroda of the Bank of Japan (BOJ) assured investors in 2013 that the BOJ could go beyond purchasing government bonds and venture into corporate bonds or even stocks in support of newly elected Prime Minister Abe’s stimulus program. If such fiat currency depreciation initiatives continue, investors seeking a hedge could turn to bitcoin.

Inflation is one of the scourges of flawed monetary policies. Even in the “low inflation” environment of the last 25 years in the United States, the impact of inflation has been pernicious. Since 1990, inflation as measured by the Consumer Price Index has averaged 2.4% per year, pushing the purchasing power of a dollar down by roughly 50% over that period. During the past 100 years, the decline in purchasing power has been tremendous. In 1915, ten dollars was enough to buy 100 loaves of white bread; today, it purchases only four loaves, as shown below.[5][6]

How Many Loaves of Bread Did $10 Buy?

While traditional monetary policy has been organized regionally and managed by individuals with different or evolving monetary theories, the supply of bitcoin is disseminated mathematically in a highly decentralized, open source ecosystem. Consequently, the rules governing the quantity of bitcoin in circulation theoretically cannot be changed without approval by the ecosystem’s economic majority.

It’s interesting to consider whether Milton Friedman would have blessed the Bitcoin movement had its technology enablers been in place during the last century. Friedman asserted that the best way to conduct monetary policy and control inflation over the long run was to limit the growth of the money supply. Based on the design of the software supporting bitcoin, the growth in its supply will be approximately 10% per year in 2015 and 2016, after which it will decelerate to approximately 4% per year until 2021, and 2% or less thereafter. Over the long term, growth in bitcoin’s supply will decelerate to 0%, settling on a fixed 21 million units in 2140. During short term periods of time, however, if the demand for bitcoin were to increase relative to its supply, the adjustment would take place by an increase in its price. Concomitantly, if demand were to fall relative to the supply of bitcoin, it would find equilibrium at a lower price in the short run.

If the Bitcoin platform works according to its design, not only will it prevent inflation from reducing the purchasing power of a bitcoin, but it also will allow merchants accepting bitcoin to avoid onerous transaction fees.[7] For example, interchange fees as a percent of average transaction value on dual message networks range from 0.84% to 1.59% on major debit cards and are typically 2% on credit cards, though can be as high as 2.95%. In addition, the fees for network and data processing for debit and credit card transactions range from 0.04% to 0.25%, not to mention a flat merchant acquiring/processing fee that ranges from $0.003 to $0.10. These three fees add up, forcing many small merchants to require minimum purchase sizes for customers paying with debit or credit cards.

In contrast, as shown below, some bitcoin merchant interfaces, such as BitPay, currently charge merchants no fee. Thanks to this favorable fee structure, merchants are beginning to gravitate to the Bitcoin payments platform. Recently, a Goldman Sachs survey of independent sales organizations and merchant acquirers found that 2% of US merchants already accept bitcoin, and 23% plan to start accepting it by 2017.

For those interested in exploring the inner workings of Bitcoin, ARK Invest suggests the following resources: the first is a piece offering a simple explanation of bitcoin using an analogy to apples, the second is a broad and digestible overview by bitcoin.org, and the third is Bitcoin’s foundational paper written by Satoshi Nakamoto. As with Bitcoin, few people understood the workings of the credit card system at its inception. But, with early adoption and time, most people gravitated to it for the convenience that it offered and began to trust that “it just works.” Some day the same might be said of Bitcoin.

Again, Bitcoin is an open source, decentralized technology platform upon which bitcoin, the digital currency, depends. Other key terms associated with the platform are miner, blockchain and block. A miner is a person or organization that runs a set of computers, called mining machines, that create and secure Bitcoin’s transactional network. The blockchain is the digital ledger of transactions that underlies Bitcoin and is transparent to the world. A block is a set of transactions that the miners put together, or “confirm,” and append to the blockchain.

In the coming weeks, ARK Invest will publish a series of articles investigating whether bitcoin is a currency, serving the three main functions of money: a means of exchange, a store of value, and a unit of account. In order for bitcoin to take on the role of other currencies, it must satisfy all three functions.

Its adoption will be expedited if regulatory authorities come to agree on the classification of bitcoin. Because of the regulatory mandate of different authorities that may not be possible. The U.S. Securities and Exchange Commission (“SEC”) has established that it considers bitcoin to be a currency. In contrast, the Internal Revenue Service (“IRS”) has classified bitcoin as property, and the Commodity Futures Trading Commission (“CFTC”) as a commodity.

As a means of exchange, money serves as a mutually agreed upon value that allows users to trade goods and services efficiently. It must be portable and divisible, facilitating transactions of any size, anywhere. Without a medium of exchange, the “coincidence of wants” in a bartering system would impede transactions.

As a store of value, money can be saved, retrieved and exchanged at a later time with predictable utility. It should be limited in supply and durable, with physical or virtual representations of ownership. Individual users of money cannot create more as needed, diluting the value of pre-existing units. Fiat currencies limit supply by recognizing monetary units created only by regulated authorities, such as the Federal Reserve.

Money as a unit of account is possible only when it also is serving as a means of exchange and store of value. Then money can act as a measuring stick of assets and debts. To do so, it has to be a universal product, fungible into goods and services. Existing fiat currencies like those backed by stable governments meet all three requirements, and the series of articles to follow will explore bitcoin’s potential to do the same.

A much-cited danger to bitcoin as a currency is government regulation or prohibition, especially in the face of lobbying by banks threatened by the loss of their middleman status and economic power. In late 2013, for example, the People’s Bank of China declared that bitcoin was not a currency with “real meaning,” and banned notable companies like Baidu (BIDU) from accepting it. However, Dax Hansen, partner at Perkins Coie, which has a well recognized decentralized virtual currency practice, states that it is “highly unlikely” that the US government would do anything similar, and that even China may be loosening its controls.

Furthermore, few technologies have been able to engage Silicon Valley, New York City and Washington, DC, simultaneously, so soon after their inception. Buy-in from these powerful players suggests that innovation-crippling regulations are unlikely. Instead, a natural system of checks and balances has emerged to support Bitcoin.