Healthcare investors likely remember the devastating impact of generic drugs on drug prices in the late 1980s. While traditional firms struggled, many successful biotechnology companies took root during this turbulent period. Focusing on the growing field of biologic medicine, many biotech firms were acquired by pharmaceutical companies looking to lower research and development costs, while others, such as Celgene [CELG] and Biogen [BIIB], remained independent and became quite successful.

Today, biologic drugs are facing competition. The first target is Neupogen, Amgen’s [AMGN] treatment for chemotherapy side effects first approved in 1991. In March 2015, the FDA approved Novartis’ [NVS] Zarxio, the first generic version, or biosimilar, of Neupogen, indeed the first competitor to any biologic drug in the United States. With $67 billion in global sales worth of biologic patents expiring before 2020, many investors are concerned about pricing pressure similar to that on generics in the 1980s and 1990s.

Biosimilars, however, could be different from traditional generics, thanks to significant differences between chemical and biological entities. Biological molecules are orders of magnitude larger and more structurally complex than their chemical counterparts, as shown in Figure 1. Chemical drugs are easy to synthesize, which means that generic manufacturers can reverse engineer them from published formulas at a fraction of the original drug cost. In contrast, biologics are genetically engineered cell lines that are more difficult to develop and maintain. Biologic manufacturers do not have to provide their cell lines to competitors, which means that biosimilar manufacturers must start from scratch. 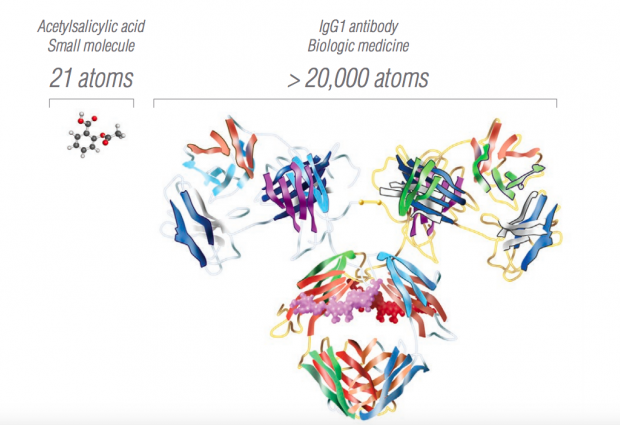 Source: Amgen. The molecular structure of Acetylsalicylic acid (aspirin), a common chemical drug compared with that of an IgG1 monoclonal antibody, a class of molecule found in many immunotherapies.

Unlike chemical drugs, biosimilars are not identical to the drug for which they substitute.[1] While the FDA permits pharmacists to substitute cheaper generics for many chemical pharmaceuticals without notifying physicians, biosimilars will need additional certification to enjoy this same privilege. Zarxio does not have interchangeability status, as the process for acquiring it has not yet been finalized.

The molecular differences between chemical and biologic drugs impact both development costs and time. Generic chemical drugs can be developed for a fraction of the cost of their reference molecule, and much more quickly. In contrast, biosimilar development is nearly as complex as biologic development, lowering the savings in cost and time meaningfully, as shown below. 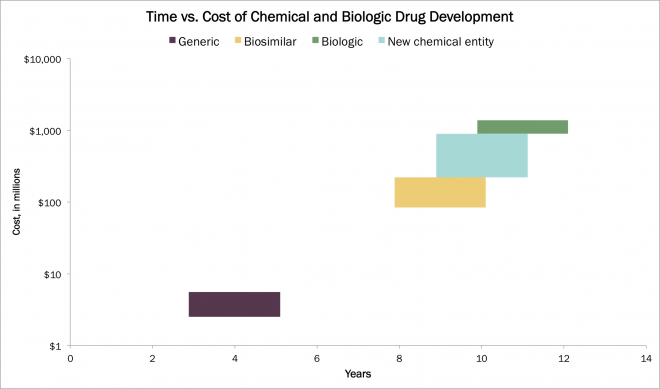 Biosimilars were first approved by the European Medicines Agency in 2006, but have experienced a slow rate of adoption. For reasons described above, they captured only 11% of the biologics market in the first five years of their adoption. Nonetheless, a 5-10% market share of a blockbuster biologic would be enough to recoup the development costs of a biosimilar within a year.

Express Scripts (ESRX) estimates that biosimilars could save Americans $250 billion over the next decade. By comparison, generics saved the US an estimated $1 trillion between 2002-2011. The average discount for generic chemical drugs today is roughly 75%, while in Europe biosimilars are priced at only 15-25% below their biologic counterparts. When biosimilars enter the US market, they likely will adopt comparable price points to those in Europe. The graph below illustrates the estimated future discounts for the most expensive drugs of 2013, once they leave exclusivity. 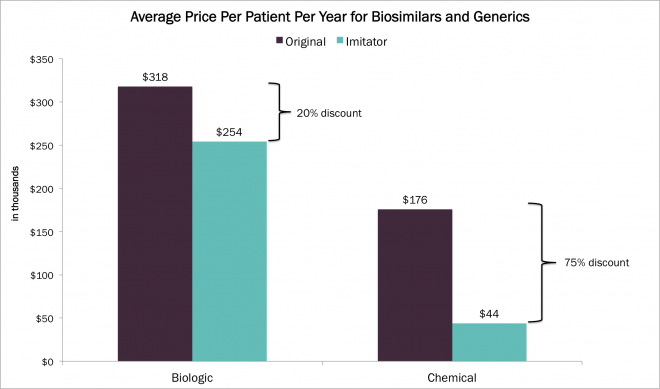 Source: Average price per patient per year of the five most expensive biological and chemical drugs of 2013. The imitator category represents an estimate of the prices of generics and biosimilars for drugs once they emerge. ARK Original Research.

Recent pricing moves in Europe could push the pricing dynamic of biosimilars toward that of generics. In 2014, Norway’s Orion Oyj [ORINY] introduced a biosimilar of Merck’s [MRK] Remicade at a 39% price discount, and captured six percent market share. Within a year, it increased the discount to 69%, driving market share up to 50%. So far, Orion Oyj is the first distributor of biosimilars to take such an aggressive tack.

While biologics are likely to be better sources of revenue post-exclusivity than their chemical counterparts, prices could drop as manufacturers begin to fight for market share. Even as it files motions to delay sales of Zarxio, Amgen announced its intention to develop its own line of biosimilars, the first due in 2017. Existing drug companies may have to take note and follow in Amgen’s footsteps.