While the autonomous vehicles are still in its infancy today, in the next decade autonomous vehicle safety will be one of the main reason for fast consumer adoption. The new technology used in such vehicles will reduce accident rates by more than 80%. The public health gain could be transformational. Every year automobiles claim more than 1.4 million lives at an economic cost of hundreds of billions of dollars.[1]

ARK has quantified the expected magnitude of this safety-advance by analyzing the introduction of another automation technology that has saved tens of thousands of lives: the airline’s autopilot. If autonomous vehicles provide a similar edge in safety, the introduction of the autonomous car could be one of the great public health advances in history. ARK believes that autonomous technology platform providers and active safety integrators will drive this movement forward. 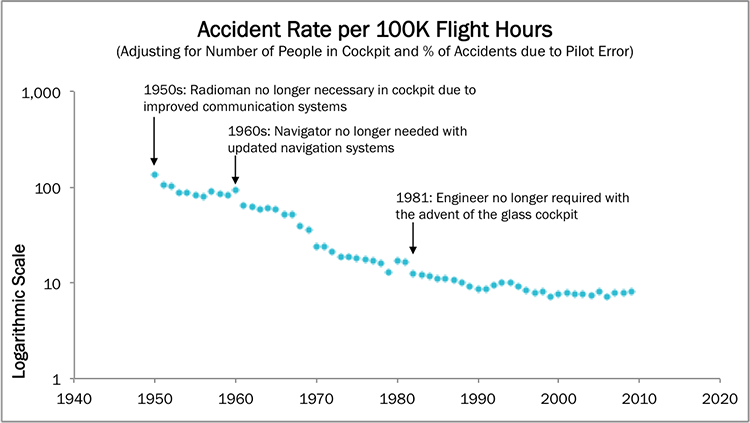 Over time, the introduction of autopilot technology has reduced pilot-attributable crash rates by 90%.[2][3] Sources: http://arkinv.st/1PjLFWT] As shown in the graph above, this drop in accidents was driven by automation system improvements from the 1960s through the 1980s and accompanying increases in cockpit efficiency. Although rudimentary autopilot systems were first developed in the early 20th century, the 1960s marked the first wave of electronic automation, which continued throughout the 1980s as digital computers made their way into the navigation and information systems of commercial planes.[4] Meanwhile, the number of people in the cockpit was reduced from five to two, as communication, navigation, and information relay systems improved. Today automated commercial planes are considered the safest way to travel, but the aggregate human health impact of this automation has been somewhat limited—less than 10,000 lives saved per year—because flying for most individuals is an infrequent activity and commercial pilots are trained professionals, unlike most drivers on the road.

By contrast, in a completely driverless world, the use of autonomous vehicles could be expected to avoid roughly 1.2 million fatalities per year,[5] an impact equivalent to eliminating breast cancer twice over. As can be seen in the chart below, a reduction in driver-errors, consistent with those experienced by the airline industry, would reduce motor vehicle accident rates by over 80%.[6]

Similar to the use of autopilot in planes, autonomous vehicle safety features will never completely eliminate mechanical or human error.[7] ARK would still expect around 200,000 collision-related deaths per year worldwide, a fraction of today’s fatalities. However, the chances of being hit by a driver who is drunk, asleep, or texting, will be reduced to near zero. 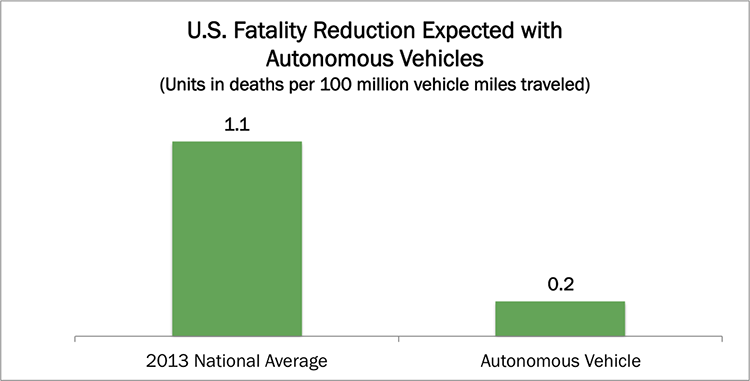 We believe that innovations from Google [GOOG], Tesla [TSLA], Autoliv [ALV], Delphi [DLPH], and Mobileye [MBLY] will help shape a future with fewer auto accidents. Fully autonomous vehicle platforms from Google and Tesla are expected by 2020. These systems could be used for autonomous taxis that could cost as little as $0.25 per mile and tap a $450 billion market opportunity. On the more immediate horizon, Mobileye, Autoliv, and Delphi are already developing and packaging autonomous vehicle safety features. The global market for collision avoidance and driver assistance is currently $14 billion and expected to grow at 25% per year as semi-autonomous features become increasingly common in new vehicles. There are over one billion vehicles in the world and active safety and autonomous technology providers can help make these machines more than 80% safer.