In the analysis that shaped our whitepaper, “Mobility-as-a-Service: Why Self-Driving Cars Could Change Everything,” ARK forecasted first, that commercial autonomous taxis would arrive in 2019 and second, that in the U.S. one out of every thousand miles, or 0.1%, would be driven autonomously by 2020, as shown below. Since that publication, Waymo [GOOG] and GM’s [GM] Cruise Automation both have promised to launch autonomous taxi services, and Tesla [TSLA] plans to release a coast to coast fully autonomous Autopilot update in 2018. According to Elon Musk, the nationwide Tesla Network probably will launch in 2019. These timelines are more aggressive than we expected, not surprising given the $10 trillion-dollar market opportunity we see in autonomous taxi networks.[1]

Waymo plans to commercialize autonomous taxis in Phoenix this year. Currently it has 600 vehicles in its fleet, with a contract for up to 62,500 additional Fiat Chrysler Pacifica minivans. In addition, Waymo recently inked a deal with Jaguar [TTM] for 20,000 I-Pace vehicles, with the first hitting the road in 2020. Given these announcements, ARK estimates that two out of every thousand miles driven in U.S. urban areas – roughly double our total market adoption forecast – could be in a Waymo autonomous car in 2020, as shown below. Thereafter, once all 80,000 vehicles hit its fleet, Waymo could address half of Phoenix’s travel needs, or 0.3% of U.S. urban vehicle miles traveled.[2]

In addition to 100 test cars on the road today, GM plans to spend $100 million to ramp production of its autonomous electric fleet, taking it to roughly 14,000 cars per year according to our estimates. As a result, GM alone could match our 0.1% adoption forecast by 2020. That said, ARK notes that Waymo’s technology is more advanced than GM’s,[3] [4] signaling perhaps that GM is behind in commercialization.

If Tesla successfully enables fully autonomous driving features within the next year or two, the adoption of autonomous taxi services could surprise the most optimistic of expectations. Tesla expects that every vehicle equipped with the second generation of Autopilot hardware will be capable of full autonomy via over-the-air software updates. By 2020, if it were to launch its own autonomous ridehailing service and every eligible owner were to sign up,[5] Tesla would account for 8% of all urban miles travelled in the US, which would be 5 years faster than ARK had predicted originally.

Given Tesla’s well known “stretch goals”, we believe its Network is unlikely to launch in 2020. Even if it were to go completely autonomous by that time, Tesla and regulators probably would require its drivers to remain behind the wheel until it had collected enough data to validate the system’s safety. Even if the Tesla Network were to go live, not all owners would sign up.[6]

While it may commercialize fully autonomous driving later than Waymo and Cruise, Tesla should have a massive data advantage. While Waymo and Cruise operate only small fleets of test cars, Tesla collects swaths of valuable real-world driving data from its much larger customer fleet. Deep learning improves with more data, so Tesla should be able to evolve its driving algorithms more rapidly than other firms, testing and validating new features in “shadow mode”[7] before full release.

Tesla has billions of miles worth of data compared to the millions of miles that Waymo has collected to date, as shown below.[8] In addition to real world miles, like most autonomous vehicle outfits, Waymo uses simulated data to augment its testing efforts. Accounting for the millions of simulated miles that it generates each day, Waymo is able to scale it’s virtual data library by hundreds of millions of miles each month, amassing a simulated library that likely surpasses Tesla’s real world miles, as shown below. Meanwhile, Tesla does not disclose how many miles it simulates each day, perhaps because it believes its real world mileage count speaks for itself. Arguably, real world driving data is more valuable than simulated data. While Waymo may have superior driving technology today, Tesla’s real world data advantage suggests that it could surpass Waymo’s capabilities in the future.[9] 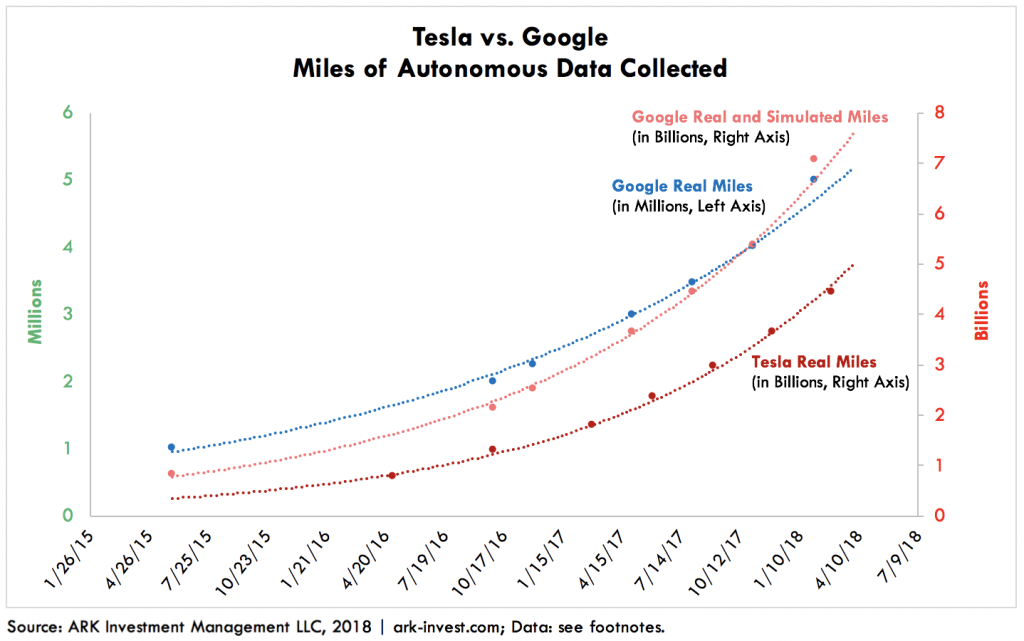 Worth noting, Waymo’s recent Jaguar and Fiat Chrysler [FCAU] partnerships will increase its autonomous fleet—and data collection rate—by roughly 140X, much faster than Tesla.[10] While Waymo must partner with other automakers for vehicle production, Tesla has chosen a go-it-alone strategy. Consequently, Waymo could surpass Tesla’s production rate with time. That said, if its network were to launch next year, Tesla could cement its lead, particularly if its vertical integration strategy adds to its competitive advantage.

In conclusion, we may be riding in autonomous cars sooner than expected. GM and Waymo plan to launch commercially in selected cities this year, while Tesla plans to launch its fully autonomous Autopilot nationwide in 2019. If just one of these players is successful, ARK expects autonomous vehicles to transport people and goods within the next two years. Against many potential competitors in the US, including Honda [HMC], Volkswagen [VLKAY], Zoox, and others, Tesla, GM, and Alphabet [GOOGL] appear to be closest to the starting line.

After first publication, this blog was updated to include ARK’s revised estimate for Tesla autopilot miles with the latest available data as of 06/20/18.