Autonomous vehicles will transform personal mobility by slashing the cost per mile relative to a traditional taxi, Uber, or personal car, according to ARK’s research. Here, we evaluate which firms will reap the benefits of a new market which promises to ramp from essentially $0 now to $10 trillion in global gross annual revenues by 2030.[1]

We expect four types of firms to get a cut of the estimated $0.35 [2] in revenue per mile that autonomous taxis will charge: platform providers, lead generators, vehicle manufacturers, and owner/operators, as shown below. Some companies probably will benefit from more than one source of revenues. 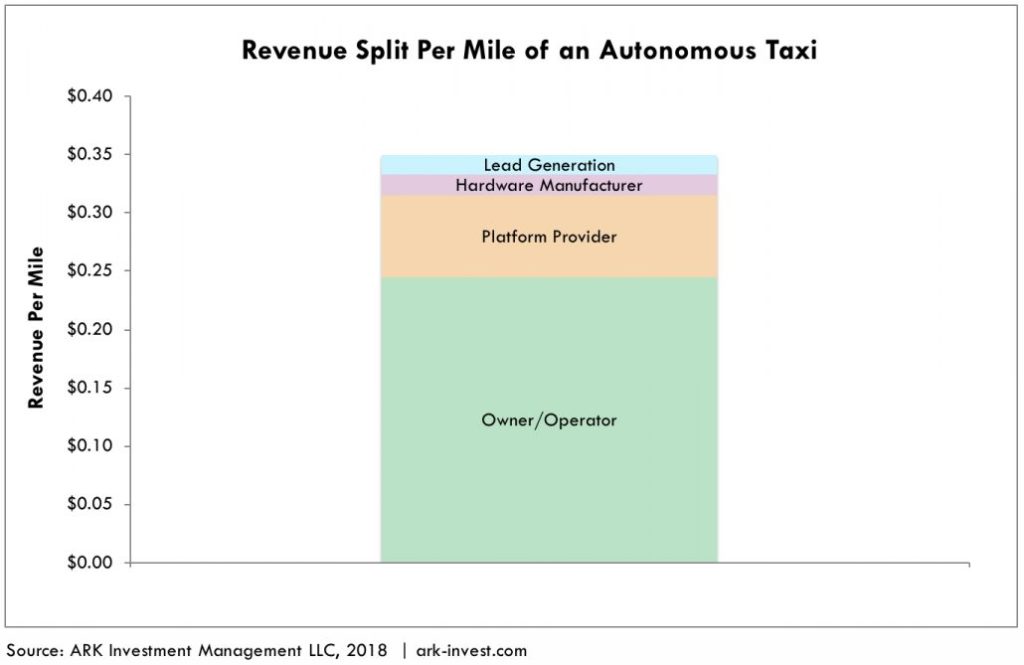 Platform Providers: We expect Mobility-as-a-Service (MaaS) platforms to earn $.07-$.10 per mile, similar to or higher than the 20% that Uber and Lyft charge today. MaaS platforms will own the autonomous technology built into vehicles, offering even more value than the Uber and Lyft ridesharing platforms. The exact share of revenues that MaaS platforms reap will depend on how much control they retain, not only over both the autonomous driving sensors and software but also over the data that the sensors gather on road conditions, obstacles, traffic, and near-misses.  The data should prove crucial to improving and validating the software.

Lead Generators: Another 5% of autonomous taxi revenues, or roughly $0.02 per mile, should go to companies that generate leads and/or acquire traffic, because they have either a captive audience or a platform for attracting customers. Potential lead generators include:

Vehicle and Component Manufacturers: Today, vehicle manufacturers earn roughly $0.01 per mile on average, upfront, on their hardware sales. Base case, they should derive similar revenues from upfront sales of or leases on autonomous taxis and, best case, a cut of recurring revenue streams as taxi utilization grows. If they benefit only from the upfront sale/lease, autonomous vehicles will be a mixed blessing, as autonomous taxis likely will displace personal car ownership, leading to lower vehicle sales in the developed world and slower sales growth in the developing world. Individual vehicle manufacturers could benefit disproportionately, however, if they win the battle for leadership in autonomous vehicles and consolidate the market, as we expect will be the case.

Key component manufacturers of the computational hardware and sensors that enable autonomous driving also should be well positioned if automakers standardize on their products, sharing the associated with upfront sales. The likely winners in this category should include the following auto, auto parts, and component makers:

Owner/Operator: The owner/operators of autonomous taxis are likely to grab the lion’s share of revenues per mile. This group includes individual auto owners as well as fleet owners of various types, including:

Tesla plans on operating its own version of an Uber-like network called the Tesla Network and is the only auto manufacturer to date to sell cars equipped with the hardware necessary to become fully autonomous vehicles. Avis and AutoNation have struck a deal with Waymo for services and maintenance for its autonomous vehicle fleet.

What About the Bottom Line?

While the share of autonomous taxi revenues should be largest for owner/operators, their margins could be the lowest based on the high costs they will bear in buying and maintaining vehicles. In contrast, the platform providers should enjoy the widest margins, followed by lead generators, manufacturers of high value-add components, vehicle manufacturers, and owner/operators.

Cover Image: uploaded by Alessio Lin is licensed under CC BY 2.0