ARK estimated that consumers will be able to travel on autonomous ridehailing platforms for just $0.25 per mile when they reach scale in 2024, or less than half the cost of driving a personal car and roughly one tenth the cost of a taxi. With these compelling economics driving customer adoption, ARK’s research previously concluded that companies owning and operating the autonomous technology stacks – like Waymo and Tesla – could command a take-rate of 20-30% of revenues, similar to that for Uber and Lyft, and that investors should be willing to pay $2 trillion today for the winning platforms.[1]

In a less competitive marketplace, we believe robotaxis ultimately could price as high as $0.50 per mile and still offer a 30% discount to personal car ownership. Enjoying natural geographic monopolies, autonomous ridehailing companies could command much higher take-rates, up to 60%, as they transport passengers more conveniently and safely than human-driven taxis. At $0.50 per mile, the winners would generate a net present value of $12 trillion in cash flows, rendering ARK’s previous estimates quite conservative, as shown below. 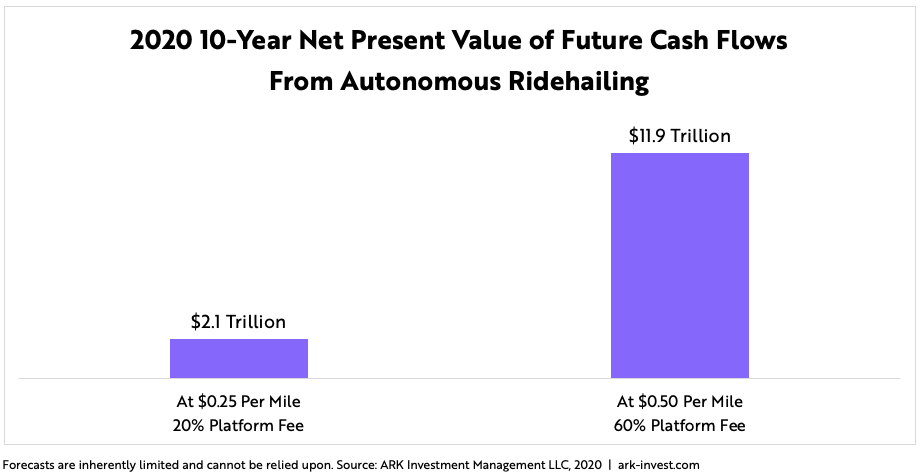 As electric vehicle prices decline in line with Wright’s Law,[2] ARK believes that the winning autonomous taxi platforms will be all-electric and will operate at lower costs than their gas-powered counterparts. Besides lowering the cost of labor dramatically, we believe autonomous technology should reduce accident rates by more than 80%, lowering insurance costs as well.

All in, autonomous taxis should offer point to point rides at costs much lower than those for personal or taxi travel today, as shown below:

Like Lyft and Uber, autonomous ridehailing operators will charge platform fees or take-rates for rides on their networks. In researching take-rates across a number of industries, ARK found that they range from 10% to more than 60%, as shown below. Researchers have observed that optimal platform fees involve a modest cut of revenues, which then creates large revenue bases with little competition. As shown in the graph below, Uber and Lyft take roughly 19% and 23% cuts of gross revenues respectively for connecting passengers to rides. Their fees are at the lower end of the range on the chart to counter stiff competition and to retain drivers. 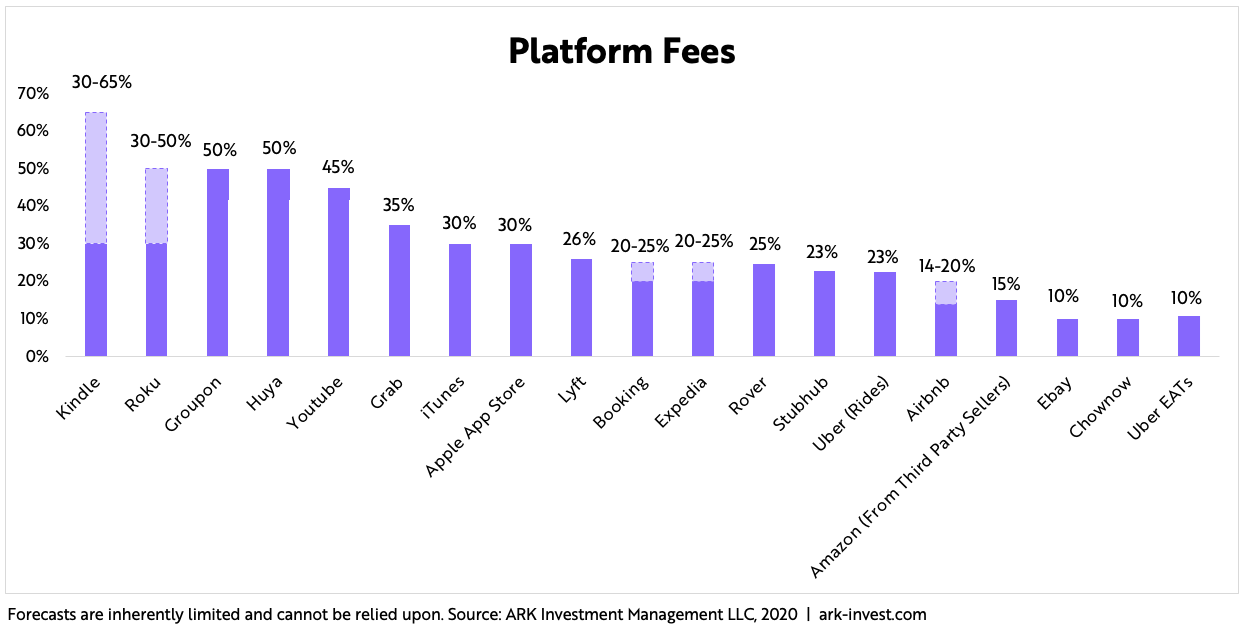 In the future, ridehailing could command much higher take-rates, up to 60%, as autonomous taxi networks evolve into monopolies that offer safer and more convenient rides. We believe first movers in the autonomous ridehailing space should be able to collect more data at a faster rate than their budding competitors, creating geographic monopolies with higher price points than otherwise would be the case.

Taking cues from current ridehailing models, ARK’s previous research may have underestimated the potential cash flow generation of autonomous taxis. We assumed that companies operating autonomous taxi networks, like Tesla and Waymo, will collect a 20-30% platform fee, but because the first autonomous ridehailing networks will offer more value and face little competition, perhaps they will be able charge much higher fees.

That said, higher prices would lower the number of autonomous miles driven relative to ARK’s previous estimates. At $.25 per mile, ARK forecasts that autonomous taxi fleets would cause global vehicle miles traveled to increase to roughly 2-3 times today’s levels by 2030.  Even if autonomous taxis were priced at the cost of personal car travel, or $.70 per mile, we believe that miles traveled probably would increase thanks to better safety and convenience. As shown below, if the price per mile of autonomous taxis were set at 70% the rate of personal car ownership, or $0.50 per mile, with no material uplift in miles traveled, we expect their present value of the cash flows generated over ten years would exceed $2 trillion. If, however, convenience and safety caused a significant share shift toward autonomous miles traveled in line with our original estimate, then at $0.50 per mile, the present value of the cash flows generated over ten years could be nearly six times higher at $12 trillion. The most likely outcome probably will be somewhere in between $2 trillion and $12 trillion. 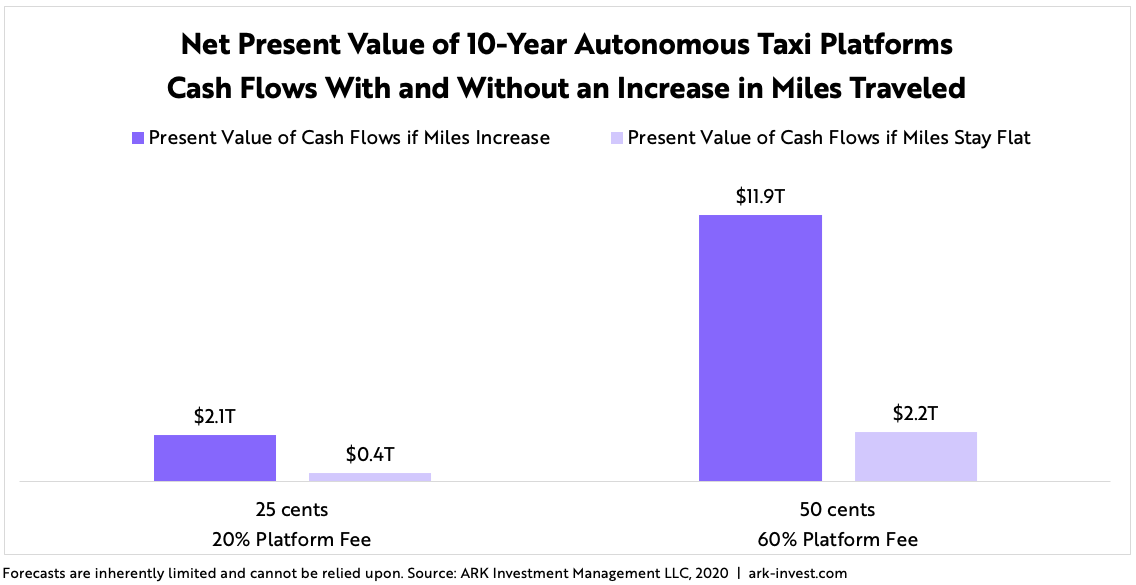 In conclusion, ARK expects that a handful of platforms will enjoy natural geographic monopolies and profit handsomely, perhaps more so than we originally forecasted, as transportation shifts from human-driven to autonomous. Not only do we expect the companies to benefit, but consumers will pay likely 30-70% less for point to point travel, a win-win caused by truly disruptive innovation.