ARK has modeled out the potential opportunity for utilities in the greater Phoenix area, as it probably will be the first city in the U.S. to have an autonomous electric taxi fleet. Projections for electricity sales growth in Arizona during the next ten years are for little more than 1% per year, based on increases in population and electricity demand per household. Autonomous electric vehicles (AEVs) could change this trajectory significantly.  ARK’s research suggests that AEVs could account for 50% of the vehicle miles traveled (VMT) in Phoenix in the next ten years. If half of all VMT in the Greater Phoenix Area were to be accommodated by AEVs, incremental electricity demand would be 50% higher than current forecasts, creating $550 million in incremental annual electricity sales.[1] 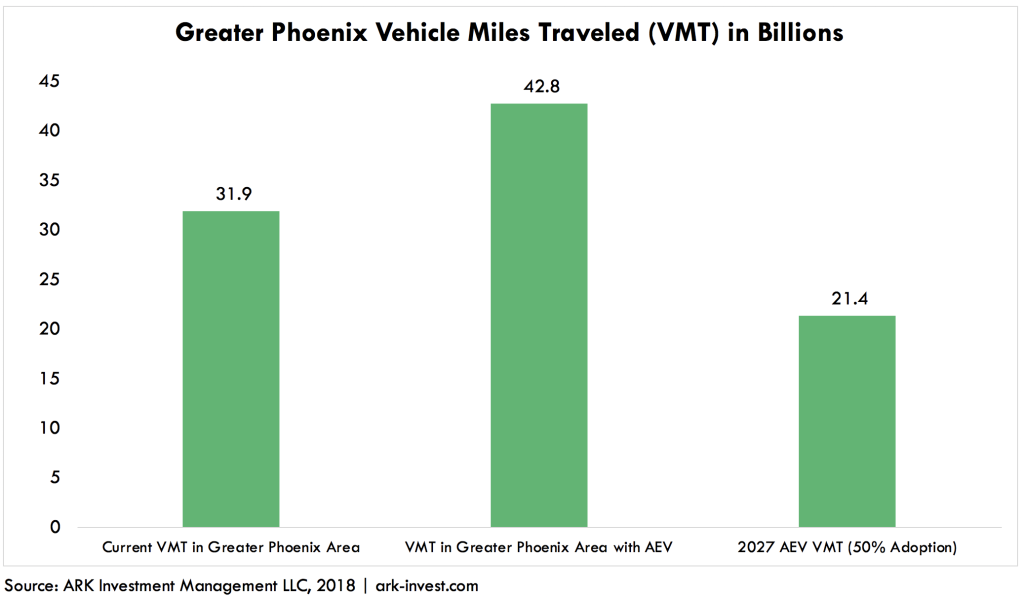 Three variables will determine the impact of autonomous electric taxi fleets on electricity demand: vehicle miles traveled, vehicle utilization, and EV efficiency. Each of the 3.6 million people living in the greater Phoenix urban area travels 24.1 miles by car on average per day, or 31.9 billion miles per year. If autonomous electric taxis were to decrease the cost per mile to travel by car dramatically, as we believe will be the case, demand could increase significantly. Both the driving and the non-driving population should push VMT up by more than a third, from 31.9 billion to 42.7 billion, pushing roughly 21.4 billion miles onto electric drivetrains by 2027 if AEV adoption hits 50%.

While the capacity utilization of personally owned vehicles is only 5%, AEVs will be able to taxi one passenger after another, pushing utilization up to 50% or higher. As a result, the number of AEVs necessary to accommodate 31.9-42.7 billion miles of travel would drop roughly ten-fold from 4.4 million to just 370,000, as shown below. 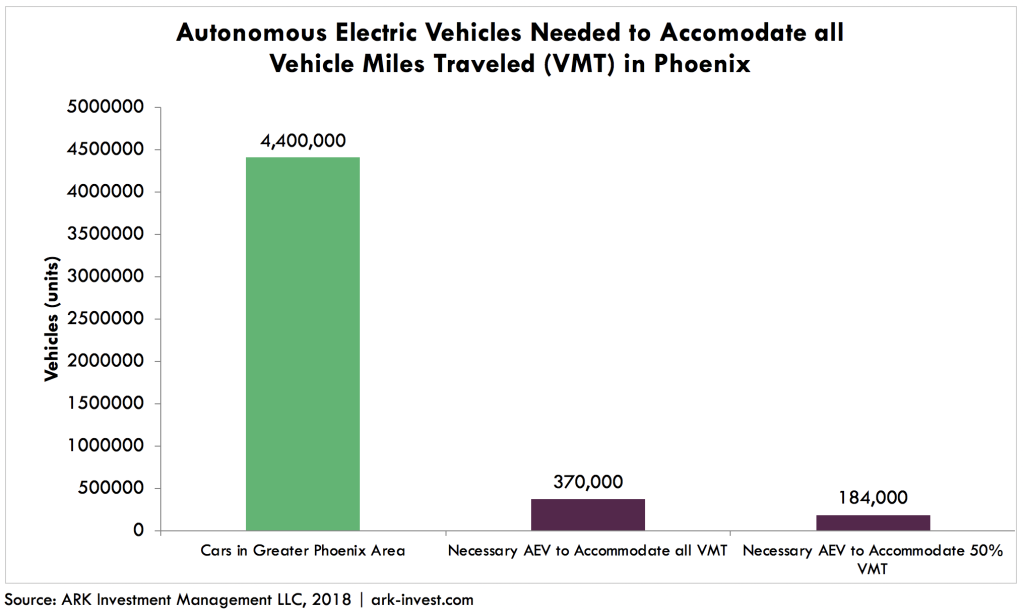 Converting the increased VMT to electricity demand provides another interesting perspective. According to its specs, the Chevy Bolt AEV operates at roughly 0.25 kWh per mile, suggesting that the 42.7 billion VMT in Phoenix would require 10.8 million MWh if all were on electric drivetrains, or 5.4 million MWh at a 50% AEV adoption rate.  At full AEV adoption, electricity demand from transportation would increase by three orders of magnitude, as shown below. 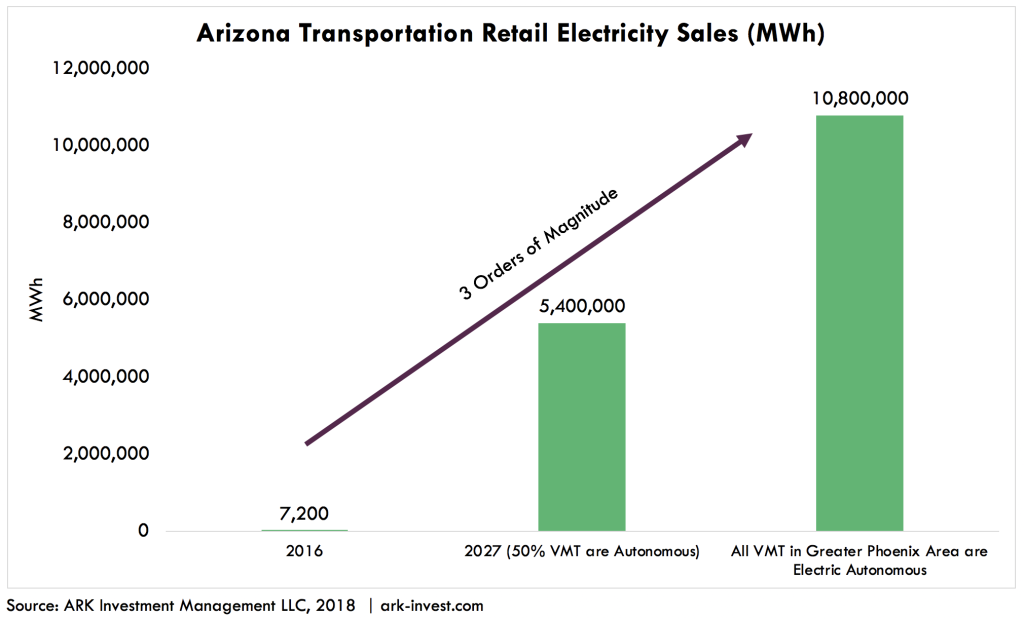 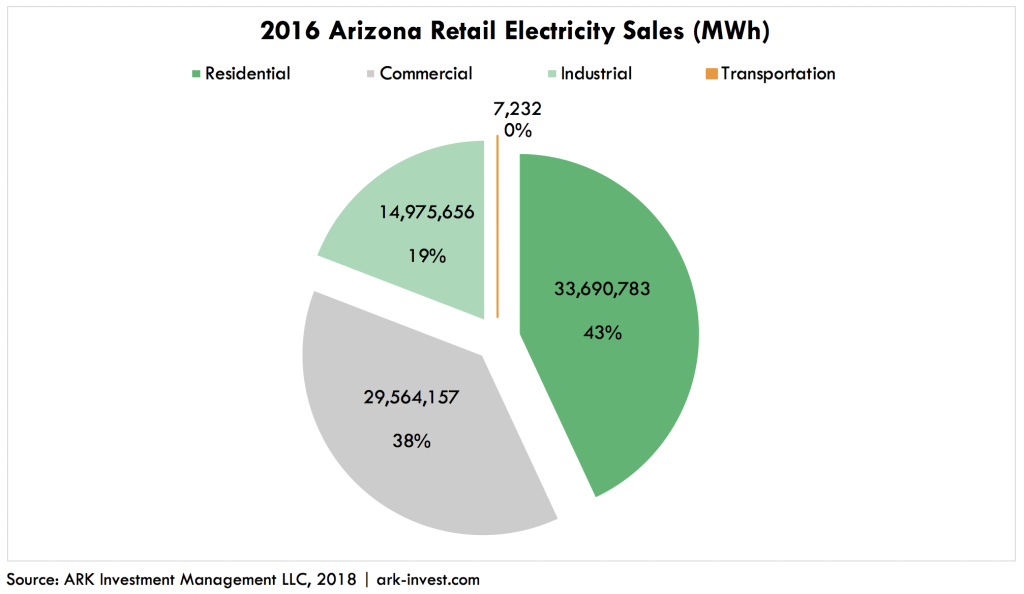 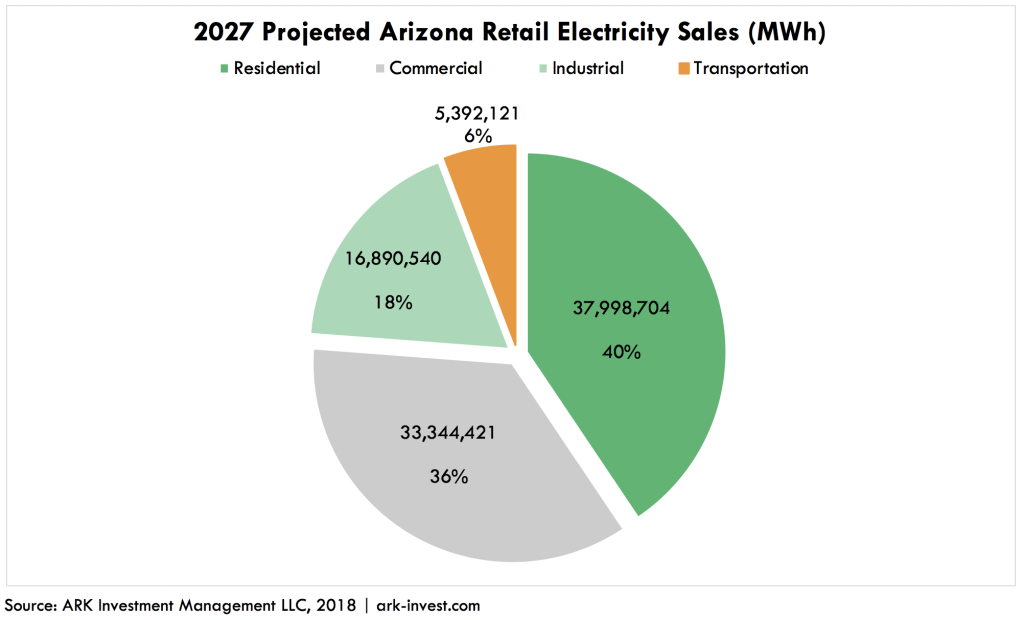 Autonomous electric taxi fleets could turbocharge the incremental demand for mature utilities. As shown below, AEVs could increase utility production forecasts in Phoenix by roughly 50% between now and 2027, and even more beyond that time frame. The same should hold true throughout the US and the rest of the world. 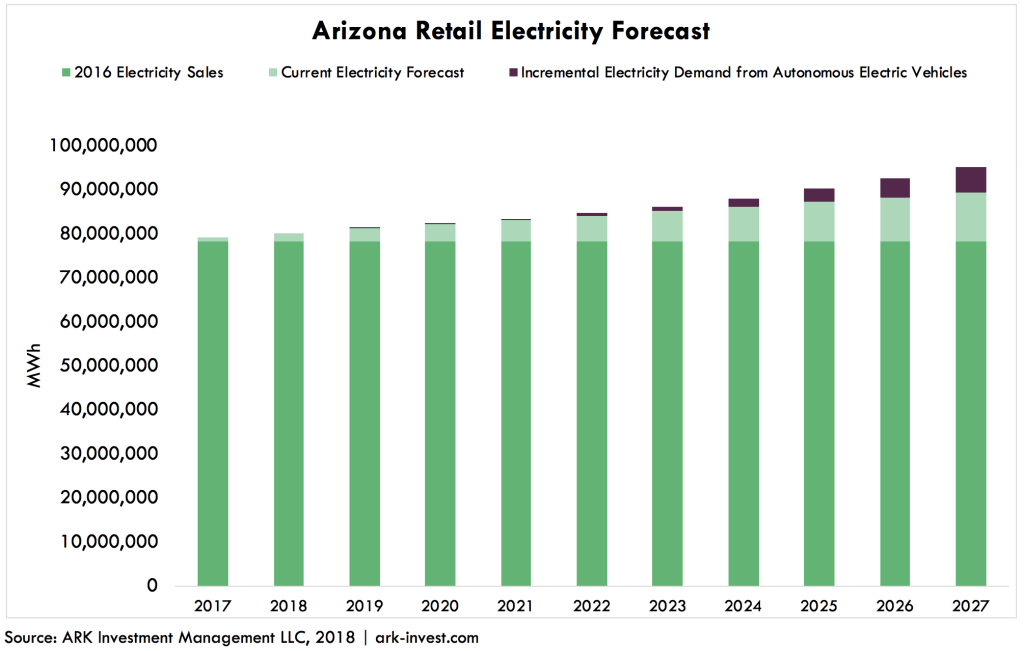