Soon, commuters may be hopping into driverless vehicles, saying “Okay car, take me to work.” The future of the automotive industry will include more shared vehicles, electric vehicles, connected systems and even autonomous cars. Eventually, these trends will merge to form a shared autonomous vehicle (SAV) system.

Even at the lofty $150,000 price tag for autonomous systems, if prototypes were ready today Google [GOOG] could profitably offer mobility as a service for 76 cents per mile today, [1] matching the current cost to own and operate a personal car. As is illustrated below, the current cost of auto ownership includes depreciation, gas, parking, financing, insurance, maintenance, registration, taxes, and tire replacement. Typically, consumers do not include all of these costs in their calculation of annual transportation costs. Parking and speeding tickets add even more to the total. With a SAV system users will be able to reclaim garages and driveways, as they will not need to park shared autonomous cars. 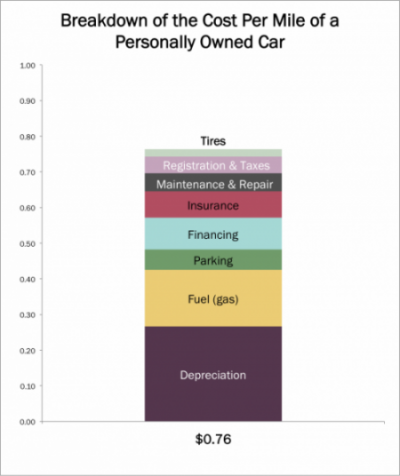 Thanks primarily to higher utilization rates, SAVs will be cost competitive with personal vehicles and far superior to taxis. Using San Francisco as a case study, taxis have an average price per mile of roughly $6.84,[2] as shown in the graph below. Given their much higher technology content, SAV’s will become more compelling over time as costs fall. Google’s LiDAR and computer systems, which currently cost roughly $150,000, should drop to $10,000 by the time it commercializes its autonomous cars in 2020. If the car were to cost $50,000, the feasible cost per mile of Google’s SAVs could drop by more than half to $.35 per mile. [3] 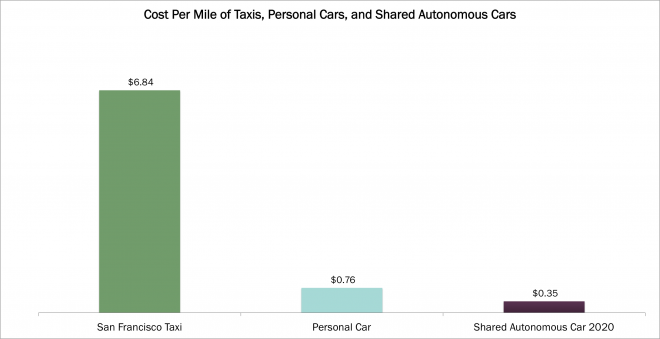 Yet, cost is just one of the benefits.  Others, such as safety, convenience, “found time”, and no need to park, would cement the case for SAV’s were they permitted on the roads today.  Safety is the most serious of these considerations.  Human error contributes to 90% of all auto accidents in the United States today.  Consequently, regulators may be swayed sooner than most analysts believe by arguments that autonomous vehicles would prevent nearly 30,000 deaths per year in the US. Although there are still regulatory and technological hutles to overcome, the value proposition here is clear, and it will become clearer as SAV costs decline.

Google likely will lead the charge towards an autonomous car system, as it is the only company with a fully autonomous prototype. Uber CEO Travis Kalanick says that he can imagine a fleet of driverless Ubers in the future. Other automotive original equipment manufacturers (OEMs) have invested in similar concepts, including Daimler [DDAIY] which owns Car2Go. Explaining its recent purchase of TRW Automotive Holdings [TRW], a private German company ZF Friedrichshafen AG referenced the enormous opportunity in autonomous and electric vehicles. Across the board automakers agree autonomous cars are a crucial component of future transportation systems.